Q. Which Windows 10 build supports FireWire, and should I update anyway? 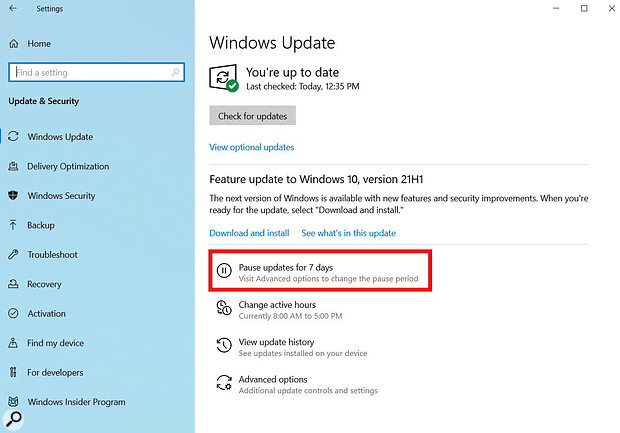 While ‘freezing’ a Windows system for a while can be helpful, it’s probably not the best plan to freeze it indefinitely, and you don’t need a third‑party app to pause Windows updates for a short time.

I used a third‑party app to disable Windows 10 updates on my studio machine a while back, and haven’t updated it since Windows 10 v1903 (Build 18362.476). Partly it’s a case of ‘if it ain’t broke don’t fix it’ and partly it’s because I gather Windows 10 doesn’t support FireWire after a certain update, and I have some legacy devices that I’d like to be able to use from time to time. But some software (eg. latest Adobe CC version) tells me it isn’t compatible with the version of Windows 10 I’m currently on and that I need to update. Are there any risks in updating that I should know about, or a specific version you’d recommend? And do I need to do anything more than create a system restore point to ensure I can undo any damage in terms of driver updates?

Pete Gardner, Audio PC Specialist replies: Windows updates understandably remain a matter of caution for most studio owners but happily, with better management by Microsoft, the number of incidents affecting the average end user has continued to decline over the years. ‘Freezing’ a working build in the short term can be a handy way of ensuring ‘uptime’ at critical points in your projects — having a known constant in the studio as critical deadlines approach obviously helps to ensure a less stressful life! But while it’s easy to understand why you’ve been reluctant to update, keeping a system frozen for an extended period, as you’ve done, can end up causing precisely the sort of problems you’re seeking to avoid.

Your Windows v1903 build’s support cycle ended in late 2020, so further security patches and updates have since ceased for that specific OS revision. Whenever this happens, you’ll inevitably begin to see, over time, third‑party software continuing to update with the expectation that OS features added in a subsequent Windows revision will be available. So if you ever want/need to install or update such software, for whatever reason, then you’ll be forced to update the OS.

This doesn’t mean you have to update Windows as soon as it prompts you to do so. Even Windows 11 Home allows you the option to delay updates natively by up to 35 days, and Windows Pro stretches this to a full year. Microsoft will tend to roll out a couple of major revisions each year, along with a major monthly patch on the second Tuesday of each month. So scheduling your updates so they happen towards the end of a month can help to ensure that any teething issues with a given update will already have been worked through by the community.

As a middle ground, I favour the approach of freezing Windows updates for shorter periods — for example, setting aside an afternoon once or twice a year to allow for an update when I don’t have deadlines looming and can leave myself ample time to roll back and recover should the need arise. Before proceeding with the update, you should set a regular system restore point, but to be extra safe you can use your backup software of choice to make an archival image too. (If you make regular OS backups in this way, this has the happy bonus of helping you get up and running quickly in the event of a full OS drive failure — it’s never a bad idea!) By adhering to a semi‑regular update schedule such as this, you’ll ensure a reasonable level of support for all your software, whilst ensuring you limit your exposure to so‑called ‘zero‑day’ bugs and issues. It will also help to limit the amount of new patches added during each update — this can, in turn, help to minimise the amount of time you spend tracking down any problems that arise when you update.

You mention FireWire specifically. Support for various things can change over an OS’s lifetime, and major updates often bring the most impactful changes. If you don’t check the patch notes each time to see what’s said about support for any given standard, such as FireWire, then keeping track while you keep a system frozen in time can be tricky. 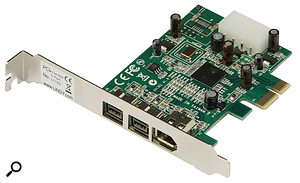 FireWire 800 cards should still work with Windows 10 and 11 but older FW400‑only versions probably won’t, and you’ll still need hardware drivers that support your current OS version.To use FireWire devices you need FireWire ports, which are usually fitted as separate cards and it’s support for the chipsets on those cards that has changed. The older IEEE 1394a (aka FW400) FireWire standard has been classed as legacy for a number of years now, and driver‑level support for dedicated FW400 cards (normally twin‑port models) has been slowly phased out over recent years. The newer IEEE 1394b (FW800) FireWire cards, which often come in three‑port (2 x FW800 plus 1 x FW400) configurations do continue to receive a degree of support, even in the latest Windows 11 builds. So there’s a good chance that these newer cards will continue to work for some time yet in Windows, and make it possible in theory to run FW800 or FW400 devices.

Of course, you’ll also need to make sure that the manufacturers of your FireWire devices have drivers that support newer OS revisions as well. So without knowing what devices you’re hoping to run, it’s hard to say whether you’ll encounter problems now. At some point in the future, though, you will, and while I see the attraction of keeping working devices operational where possible, I wouldn’t recommend anyone buy FireWire devices now unless they’re prepared to maintain an older machine specifically to run them!