Susanne Kirchmayr, also known as Electric Indigo, is an Austrian music producer, techno DJ and founder of female:pressure, an international network of women in the electronic music industry. Here she chats to Caro C about her career beginnings through to her current projects.

DJ, composer, musician Electric Indigo has performed in 45 countries across Europe, Asia, and the Americas. She represents an intelligent and distinguished interpretation of techno and electronic music. In 1998 she founded the transnational female:pressure network for which she received an Honorary Mention at Prix Ars Electronic in 2009. The Republic of Austria awarded her with the Kunstpreis Musik in 2020. Electric Indigo premiered her compositions at festivals like Wien Modern, Musikprotokoll, CTM or Heroines of Sound and composed for Klangforum Wien. Her debut album '5 1 1 5 9 3' came out on Imbalance Computer Music, followed by 'Ferrum' on Editions Mego in 2020. 'Brittle' was released on Ventil Records in 2022.
https://indigo-inc.at 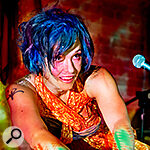 Described as a "one-woman electronic avalanche" (BBC) and a "sonic enchantress" (BBC Radio 3), Caro has been making her own brand of sensual electronica since the late 90s, reared on a diet of black music, Warp Records and Björk. Caro currently finds herself in ample musical mischief in the Manchester creative mycelium and beyond — making music, teaching, producing podcasts as well as being the instigator and project manager of electronic music charity Delia Derbyshire Day.