We've reviewed a number of the Sonivox (and, under their previous label, Sonic Implants) libraries in recent times, including some fairly up-market and substantial orchestral libraries but Steel Core, the subject of this review is a totally different beast, giving you change from £20$35 and being aimed in a different musical direction. Steel Core provides a set of seven nu-metal-based construction kits that range in tempo from 86 to 144 bpm. A total of 170MB of sample data is supplied for each of the supported formats and spread over some 120 individual loops. 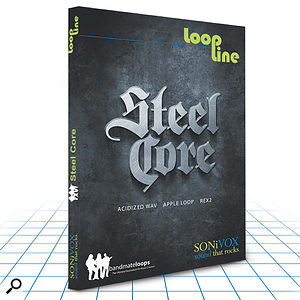 Each of the construction kits follows a similar format, based around small numbers of electric bass, acoustic drums and electric guitar loops. Numbers of each type vary between the kits, but in all cases there's enough choice to build some musical variations. The drum loops tend to include a couple of main beats, as well as loops with fills and sparser loops that could be used for an intro or breakdown. No single-shot hits are included, so a little beat-slicing or drawing on other samples will be required if you want to add further variations or embellishments. The electric guitars follow a similar format, in that they include loops suitable for main riffs, variations and the occasional bit of guitar 'ear candy' such as arpeggios played on harmonics.

Given the budget price and compact format compared with many current loop libraries, it's tempting to pigeonhole Steel Core into the 'cheap and cheerful' category. However, although this library is of limited size, the quality of the material is pretty good — and the performances are excellent, fitting the target style very well. The guitars are aggressive and suitably down-tuned, while the bass loops are solid and have plenty of bite. The highlight for me was the drums: from both a sound and performance perspective these are spot-on, with a well-balanced, heavy kick and snappy snare. While great for nu-metal, they'd work just as well in other types of modern rock. A touch of room ambience gives the drum loops a little character and, thankfully, they're not overly compressed, so the sound has plenty of energy and dynamics.

In fact, the only down side to Steel Core is that the library isn't three times the size — and this isn't just me being greedy: I'd be happy to pay the extra cost for additional content of a similar standard, but as it is, you probably need to add other loops or some of your own playing to build a full song-based arrangement around one of the construction kits. Media composers just looking for a 30-second cue would, however, manage fine with what's here. As it is, Steel Core is beautifully formed, if just a little small, but still well worth auditioning. John Walden