If you are a piano player who's keen to find the best sampled pianos available, the odds are that you will have at least tried Synthogy's Ivory. This was reviewed by Paul Wiffen back in the March 2005 issue of SOS, and his conclusion was simple: Ivory offered the best virtual grand piano for the Mac available at the time. Since then, Synthogy have added both PC support and, to complement the Steinway D concert grand, Yamaha C7 Studio grand and Bösendorfer Imperial grand in Ivory, have added an Italian grand piano as a separate product. Their latest release is Ivory Upright Pianos, which brings the same virtual instrument front end to four sampled upright pianos. 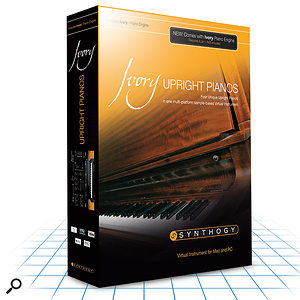 As with the earlier products, the sampling detail is very impressive, with some 50GB spread across over 5000 samples and up to 10 velocity layers, so you should be prepared for the long haul when installing! AU, RTAS, VST and stand-alone formats are all supported, and copy protection is via iLok (the key isn't included). The four instruments used are a modern Yamaha U5, a vintage 1914 Hume, a 1915 Packard and an early 1900s 'tack' piano. As with the grand pianos, Synthogy includes a number of different presets based on each of these four pianos, and these employ different combinations of EQ, ambience or other options provided by the excellent front end — but I'll concentrate on the basic sounds of each piano here.

Without additional processing, the Yamaha U5 sounds very clear throughout its range, with a crisp attack at high velocities and, thankfully, a sound that doesn't get out of hand in the lower registers. The velocity response is excellent and allows the subtlety of the playing to come through. In contrast, the vintage Hume has a tone that is slightly less clinical-sounding, and somewhat richer — but it still shares the Yamaha's dynamics. The Packard provides more of a bar-room vibe: its tone is a little lighter than that of the previous two instruments, and it has a genuine honky-tonk, slightly detuned sound. Finally, the 'tack' piano (so called because of the metal tacks that are inserted into the hammer felts) offers a suitably bright, detuned sound with, courtesy of the front end's ability to add variable amounts of mechanical noise, the amount of click from the tacks entirely up to the user.

All four of these pianos have plenty to offer, and when the further processing options are taken into account there's a huge range of upright piano sounds available. For use in modern pop and rock, the Yamaha would be my favourite, but if you need something with a specific character you should find that the other instruments are equally impressive. Although I suspect owners of the Ivory Grand Pianos will take little persuading that the uprights are worth adding to their arsenal, Ivory Upright Pianos sounds fabulous. Given the detail and flexibility that's on offer here, it's very fairly priced too. Highly recommended. John Walden