Samplr is a modestly-named app for sample and loop manipulation. Its graphics and even some of its behaviour are reminiscent of Teenage Engineering's OP1, but Samplr is no copycat. For a start, it's notable for making superb use of the iPad's multi-touch surface to stretch, transpose, play and twist up to six samples, each with six note polyphony. Samples can be loaded while others continue to play, so you can introduce loops, ambient effects and instruments without ever stopping. 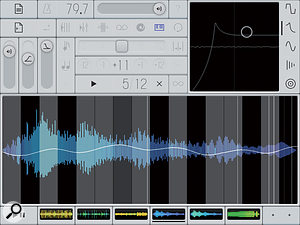 Select any sample by its icon in the lower part of the screen. In Keyboard mode, samples or portions of samples are played chromatically.The large 'playing area' consists of a waveform view designed for performance, with polyphonic gestures fully recordable over a maximum of 128 bars for each sample. The available playback modes are: Slicer, Looper, E‑bow, Tape, Scratch, Keyboard and Loop Player. All have their own unique flavours and controls, plus you can switch the playback mode at any time. For the maximum creative buzz, gestures recorded in one mode continue to play when another is selected.

I can't recall any experience of triggering and interacting with samples that feels more instantly natural than Samplr's screen-stroking. The actions available vary according to mode, but in all modes other than Loop Player, the vertical axis of the playing area corresponds to volume. Samples can be reversed at the press of a button and have a simple attack/release envelope. Then there's a rather neat central control combining pitch-bend and transposition, its range an impressive plus or minus four octaves!

Already there's a stack of features perfect for ambient electronica, but grooves aren't left out. Click the 'fit to tempo' button and the sample length is adjusted so that it fits the project tempo, and although tempo isn't automatically detected, the existing method of specifying the number of bars and time signature works well.

Let's look more closely at the seven play modes. In Slicer mode, you tap the screen to play individual sample slices. A preset slicer carves out up to 32 equal chunks, but it's easy to add your own points manually and move them around or delete them. There's a fun shuffle option that randomly shunts the playback head amongst the slices, all of which amounts to a highly entertaining way of manually reshaping any loop.

The next mode along is Looper, in which fragments of the sample are looped according to the position of two fingers. As the fingers draw close together, near-granular tones are created, and if the fingers cross, playback switches into reverse. The same idea gets a different implementation in E-bow mode. It's polyphonic, so instead of setting the loop length with two fingers, you get a slider. In this mode, you can unearth playable tones in pretty much any sample source, which is totally Fripptastic! 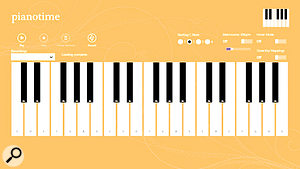 In tape playback mode you set the volume, direction and speed with your finger. These gestures can be recorded.Tape mode has more than a whiff of Teen Spirit. OK, it isn't quite the tape recorder of the OP1, but the position of your fingers influences the sample playback speed, with a smooth progression from slow reverse through stopped and original speed, ending up at a rousing quickstep. In a slight variation, Scratch mode puts the playback speed directly under your fingers. Alternatively, you can set playback to its fixed speed and instead use your fingers to set the point(s) where playback starts and its (or their) direction.

In Keyboard mode, you play samples or a selection within a sample chromatically. Activate legato and the slide between notes becomes smooth-flowing and natural. Which brings us to Loop Player mode, an easy one: it loops the sample at the project tempo.

That little lot is a full and, most importantly, accessible toolkit — but there's more. Each sample has five effects, and there's a set of master effects over everything. A Kaoss-like window sits in the right-hand corner, inviting manipulation whenever the mood strikes. The effects are Distortion, Filter, Amplitude Modulation, Feedback Delay and Reverb, the X/Y axis handling the most useful parameters for each.

There are remarkably few omissions. Despite its name, Samplr doesn't sample. It also currently lacks audio copy and paste, but perhaps its main failing is one of iOS in general: the lack of a common folder repository for samples. Every app has its own private pool, stocked by iTunes or some other fartsy process. However, unlike many apps, Samplr is worth the effort. I'm finding it to be a creative goldmine for sample manipulation and an ambient explorer's wet dream. For me, this is the best app since Funkbox and it comes highly recommended.