If you've ever fantasised about playing guitar like Nile Rogers — and who hasn't — Scarbee's latest instrument could make all your dreams come true. 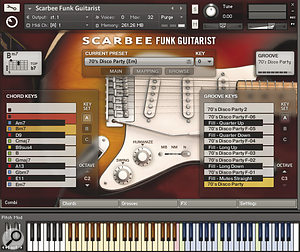 Thomas Hansen Scarbye's Kontakt‑hosted 'Scarbee' products are well‑known for their highly realistic‑sounding virtual recreations of vintage electromechanical keyboards and electric basses. These instruments focus on playability, ease of use and easy‑to‑grasp real‑time controls (notably on the bass guitars) to introduce characteristic artifacts that help to identify the instruments as being 'real'. Scarbee Funk Guitarist (SFG) departs from this paradigm in that it's not a virtual guitar intended for 'freeform' playing — you'd be scuppered trying to use it for playing top‑line melodies or rolling arpeggios. SFG's remit is quite specific: to recreate authentic‑sounding funk guitar grooves in almost any chord flavour, inversion or fret position you're likely to need, and all using only two fingers. Think Chic, Sly & The Family Stone and Average White Band, and you'll appreciate where SFG is coming from.

SFG's Kontakt library architecture couldn't be simpler. It consists of just one instrument called, unsurprisingly, Scarbee Funk Guitarist.nki. SFG is divided into two main sections: a chord library (3413 chords in all, including 'similar' chords, or 'substitutions' as Americans like to call them) and a groove library. Grooves are tempo‑synced step‑sequences powered by SFG's own internal sequencer, which trigger sample 'slices' according to the chosen chords. Instant gratification is at hand in the form of a library of preset grooves/chord sets, which may well suit your purposes straight out of the box. Each preset comprises a selection of chords mapped across three octaves of orange keyswitches below middle C, whilst the three octaves of blue/green keyswitches from middle C upwards trigger three variations of the four‑bar 'main' grooves (green), plus a selection of 33 one- to two‑bar fills appropriate to the groove style (blue). The red keyswitch on B3 has just one crucial function — it's the 'stop' button!

In this way, performing on SFG really does require only two fingers: one to select a chord, and the other to select either one of the 'main' grooves or any of the 33 fills. Naturally, there is some serious KSP scripting going on behind the scenes. One very neat feature is that fills only play for as long as you hold them down; when released, the most recently played main groove takes over on the next beat, at the point it would have been at if the fill had not been played. There are three adjustable controls on the main page: pickup selection, which loads new samples; Humanise, which adds a degree of sloppiness to the grooves' timing; and Swing, which ranges from nicely subtle to sounding like the guitarist is tripping over his/her own bootlaces/slingbacks.

Using the search filter (right) to find chords by type. Position, number of strings and top note can optionally be specified. The results pane (centre) displays all chord variations matching your criteria.

Each main preset is assigned a root key signature, with chord maps presumably chosen to best complement their keys. If you like a particular preset but it's in the wrong key, this can be changed — the entire chord map can be transposed in semitones (this updates the sample pool) up to an octave in either direction. But what if you require specific chords not provided by the presets? No problem, you can customise the current chord map to remove unwanted chords and add new ones. To search for that perfect chord, jump to the Chords page, then select the Map tab. Here, you filter your search by key and chord type — and you can optionally specify preferred position, number of strings and the top note. The central pane then displays all the possible chords that agree with those conditions. Double‑click any of these to audition it; once you've found a variation you like, just click with the pencil tool on any key on the chord map to assign it.

Entirely customised chord maps can be made this way, and saved as user presets. You can even input chords from your MIDI keyboard, and SFG will do its best to come up with the closest match. In addition, each chord map provides three completely separate three‑octave key sets: A, B and C. By default, the presets' chord maps use set A, with sets B and C left blank for you to populate with your own choice of chords, giving an effective total of 105 different chords accessible at any time, enough for even the most harmonically complex funk extravaganza. Switching between key sets is done simply by moving your keyboard's modulation wheel. 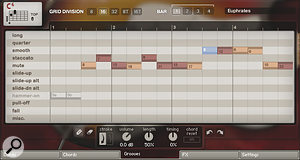 The groove sequencer's matrix‑style editor. The greyed-out and blue blocks represent where the AI has made replacement articulations and flagged 'inadvisable' choices respectively.

Groove Maps can be customised in much the same way as Chord Maps. You can load any of the factory preset Groove Maps whilst leaving the current Chord Map unchanged, or you can assign any single groove or fill from the entire preset repertoire to a specific keyswitch, if you want. However, things start to get very interesting when you delve into groove editing. The matrix‑style pattern editor displays the 12 available articulations as 'blocks' along a timeline grid. A pattern can be up to four bars long, with step resolutions ranging from eighth notes to 32nd notes. Articulations are placed on the timeline by clicking with the pencil tool in the required box, and the velocity of that block is adjusted by dragging the mouse up or down. Alternating upstrokes and downstrokes are assigned for you automatically, but you can manually alter these for individual blocks, if required. Certain articulations are available in more velocity layers than others, and this is shown numerically as the value is changed.

There are rules, however: the best results aren't obtained by simply dropping events onto the grid willy‑nilly, so the sequencer uses Artificial Intelligence rules to assist in programming 'valid' parts. For example, if you choose an articulation that doesn't exist for a particular chord, an alternative articulation replaces it automatically and the note in the sequencer is greyed out to show that a replacement was made. Correct placement of falls, pull‑offs and slides can be quite tricky, and it takes a while to get the knack. The sequencer also helpfully suggests when to correct 'inadvisable' articulation choices, by displaying them in blue, although I found it didn't pick up on a number of real howlers I'd made. Although you can't save your groove creations individually, you can save the current Groove Map that contains them as a user preset. Naturally, if you save the DAW project you're working on, any edited or newly created grooves will reload exactly as you left them.

The guitar used to create SFG was extensively customised for the project, although the documentation isn't specific about the make of guitar. Clearly, it's a Stratocaster type, but whether it's a Fender or a copy isn't revealed. Nevertheless, the characteristically taut, wiry tone certainly sounds like the real deal. The naked 'DI' sound of SFG is quite choppy and percussive (as it should be), although I occasionally found the 'mute' articulations to be a little overwhelming at times. It's possible to edit these to play lower velocities, but that would be a time‑consuming task when lots of grooves and fills are being used. A very effective alternative is to apply fast‑response compression to tame the transients, allowing the body of the chords to shine through for a much smoother effect.

SFG is rounded off with a suite of eight effects taken from Kontakt's in‑built effects arsenal: EQ, Compressor, Amp, Cabinet, Phaser, Chorus, Limiter and Reverb. Each of these has a short list of presets and only one or two controls — but they're quite effective for coaxing a fair range of tones from the instrument. There is also a long list of Effect Suite presets (effects combinations), but there is no option to save your own. Of course, you can always process SFG using your own choice of effects and amp-simulation plug‑ins.

SFG is an effective solution to recreating some seriously funky grooves in the absence of a real guitarist. It doesn't necessarily cover every conceivable approach to funk guitar playing: a clipped, palm-muted style is not possible, for example, nor can it supply those single‑note decorative lines often used to break up the rhythm. Such shortcomings aside, SFG elegantly fulfils a role that's otherwise difficult to achieve using other virtual instruments. Its library of authentic pre‑programmed grooves will get you going in no time at all, with the added attraction of customisable grooves effectively allowing for total rhythmical freedom. Market success should be assured if NI can secure some deft product placement by Disco Stu on The Simpsons.

There are numerous sample libraries containing pre‑sampled guitar chords and grooves, but none offer levels of groove customisation and functionality comparable to SFG. The closest match is Steinberg's Virtual Guitarist 2, but that is now discontinued and very hard to find, leaving Rob Papen's Rhythm Guitar Synth as currently the only other virtual guitar instrument offering a similar tempo‑synced groove creation system with funky applications. However, the musical ethos behind it is very different, being less concerned with chordal sophistication (major, minor and power chords only) and having more to do with its particular synth processing capabilities.

Pick Up The Pieces

The audio chunks that form the sonic core of SFG were extracted from real‑life rhythmic performances by guitarist Søren Reiff, and provided in a choice of neck, neck‑middle and middle‑bridge pickup positions. The chord strikes, plus the mutes, hammer‑ons, pull‑offs, slides and release noises that form a vital part of the funk playing style, were then chopped into slices that are reconstituted by SFG's sequencer engine into accurate facsimiles of the original performances. Why go to all that bother, you may ask, when you could simply use tempo‑sync'ed REX files? The answer is that Scarbee's musique concrète approach allows for total customisation while utilising the minimum sample data. Consider the sheer number of chords and their variations, and an almost infinite number of possible grooves (remember, you can create your own), and it becomes clear that you'd never own enough disk space to accommodate all the possible variations using long‑form sampled phrases.

Although SFG's groove sequencer operates strictly in 4/4, non‑compound time signatures are possible by retriggering grooves at the appropriate moment. For example, retrigger a groove just before the end of the 7th beat for 7/4, and if you want a fill into the next 7/4 bar, trigger the fill immediately before the end of the 6th beat. This requires a little more user interaction than just letting things tick away in 4/4, but it can be done!

SFG is an authentic‑sounding virtual funk guitar instrument that combines a 3413‑strong chord library with a tempo‑sync'ed groove player, and is easily played using just two fingers. A library of pre‑programmed funky grooves provides instant gratification, while the on‑board groove editor opens the door to custom grooves and almost limitless rhythmic possibilities. Perfect for adding an energetic lift to all forms of funk, soul, hip hop, R&B and pop.