Pickup experts Seymour Duncan have revamped their effects line-up for 2014, introducing two new stompboxes: the Dirty Deed distortion and this pedal, the Vapor Trail analogue delay. It promises true analogue delay effects with built-in modulation, and boasts an insert loop, allowing additional effects to be applied to the delayed signal. The latter is a relatively rare feature to find on a delay pedal, and rarer still on one this compact and pedalboard-friendly

Assembled in the US, the Vapor Trail is a handsome-looking device, with a sparkly silver paint job and some natty blue graphics. What appears at first glance to be a conventional cast-metal case in fact has a convenient latched cover for the battery compartment around the back, allowing quick battery changes without having to unscrew the whole back panel. Other bespoke touches include the notched chrome nuts, which secure the input and output jack sockets, and the clear delay-time knob, which incorporates a blue LED that flashes in time with the repeats. There are also mix and repeat knobs, plus a pair of smaller pots for the rate and depth of the modulation applied to the delayed signal. In addition to a 9V battery, the Vapor Trail will accept power from an external power supply anywhere between 9V and 18V, though 9V is recommended. Finally, there's a single quarter-inch jack socket on the left-hand side of the pedal for the insert loop. Simply connect a TRS splitter cable and you can plug in any external effects you wish.

Inside the case, you're greeted by a pair of smart white printed circuit boards stacked one on top of the other, the uppermost crammed with miniaturised components. Turn the upper PCB over, however, and you'll find a pair of full-sized BBD (bucket-brigade device) analogue delay-line chips. These are Coolaudio V3205SDs, if you're interested: a low-noise, low-voltage IC providing anything from 20.48 to 204.8 ms of delay — so Seymour Duncan have presumably fiddled with the clock frequency to achieve the stated delay range of 15 to 600 ms. The pedal is neatly put together and built to last, with the controls, in and out jacks and footswitch all mounted on separate circuit boards.

The Vapor Trail sounds very analogue indeed, with a pronounced warm and fuzzy quality to the repeats — although 'quality' is perhaps the wrong word to describe this pleasingly lo-fi sound! The overall effect is to dampen the highs and give the repeats an organic feel, seeming to bloom and then dissolve. It's the very opposite of a clinical, bright, hi-fi digital delay. It wouldn't be this reviewer's first choice for rockabilly slapback, where a smidge more treble definition is required, but the Vapor Trail really excels at medium to long delay times. Because the repeats are softened and smoothed in such a pleasing way, you can set the feedback quite high without crowding out the dry signal, creating instantly atmospheric soundscapes. The onboard modulation is well judged, allowing you to add some gentle movement or a more pronounced lurch and warble to the repeats. For the more adventurous, the Vapor Trail will happily go into self-oscillation when you max out the repeats knob: you can create a whole range of divebombs, squeals and juddering turntable-losing-power noises by fiddling with the delay time. 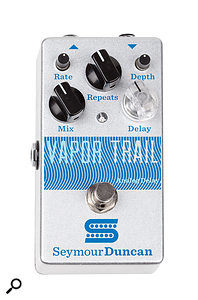 The mix control is, in fact, really a wet gain control, adding up to 3dB of gain to the wet signal when turned fully clockwise, meaning that the dry signal stays at the same level while, past 12 o'clock, the repeats become louder than the dry signal. It's an interesting tactic that again lends itself to more adventurous sonic territory, but a side effect is that, at least for conventional delay effects, where the dry signal still dominates, the useful range of the mix control is crammed into the region between 9 and 12 o'clock, making precise tweaking a little more fiddly than it might otherwise be.

The wet insert loop opens up some very interesting options. Perhaps the most satisfying is to connect a volume pedal here, giving you direct, hands-free control over the level of the delayed signal and opening up huge creative possibilities. There are many more imaginative sounds to be created by applying other effects to the repeats. Experimenting with chorus, vibe and tremolo effects achieves some evocative and psychedelic results, while shaping the sound of the repeats with EQ and even wah is just as productive. The insert loop also means you can use the pedal in stereo, employing the loop send as the wet output and the regular out jack as the dry output.

With their previous delay pedal, the discontinued Déjà Vu, Seymour Duncan tried to be all things to all men, with blendable digital and analogue delay effects, tap tempo, stereo outputs and multiple inserts. With the Vapor Trail, their designers have narrowed their focus to a more specific audience and have produced a very convincing pedal as a result. The Vapor Trail delivers warm, organic analogue delay suited to atmospheric guitar tones and way-out sonic experimentation. The insert loop, meanwhile, dangles a big carrot in the direction of stompbox junkies, who will derive much joy from mixing and matching the Vapor Trail with their existing effects arsenal. David Greeves