This miniature PA from pickup specialists Schertler offers a striking combination of quality, portability and affordability.

I stumbled across this little amplifier when visiting Schertler's UK distributors, Systems Workshop, to check out a Studio Bricks modular sound booth. We used the Jam 150 to play back loud music outside the booth so that we could get a feel for how much sound isolation it provided, and both Hugh Robjohns and I were surprised at both the clarity and bass extension of this little combo — so we asked if we could take one away for review, along with its powered extension counterpart.

Schertler are well known for their acoustic instrument pickup systems, and we've run into their dedicated acoustic guitar combos before, but the Jam 150 is more like a hi-fi PA in miniature. It has an onboard mixer and a range of reverb/delay effects, giving it similar functionality to those acoustic guitar combos that also include mic inputs, but without added frills such as anti-feedback notches or compressors. 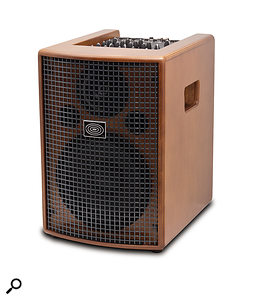 Available in a painted or lacquered wood finish, the cabinet is made mainly from 18mm high-grade ply with handle cutouts machined into the sides. It measures 270 x 400 x 360 mm and weighs 13kg. Two bass ports are built into the baffle, which looks as though it may be MDF, and a curved metal grille protects the drivers. A 'top hat' stand socket is fitted to the base, as are four feet. I particularly like the look of the lacquered wood version, where no attempt has been made to hide the fact that the box is made of plywood as the laminations are visible beneath the finish at the edges and the rounded corners. Rather than detract, this seems to reinforce the integrity of the product, which is all about solid engineering substance rather than marketing hyperbole.

The onboard Class-AB amplifiers are rated at 150W total and feed a one-inch dome tweeter, actively crossed over to an eight-inch woofer. Set into the top panel, the mixer comprises four channels, two of which have mic or high-impedance instrument inputs, and one that is selectable between line or instrument. The fourth is configured for music playback (but could be used as another line input), and has stereo inputs on phonos summed to mono. Phantom power (48V) is switchable globally for the mic inputs. The first three channels have three-band EQ, and the fourth just high and low shelving EQ with no mid. All the channels have their own level controls and channels one to three have send controls feeding the internal effects section.

In the master section there are controls for record out level (feeding a pair of phonos), master volume and master effect level control. Effect send and return jacks are also fitted in case you want to patch in your own external effects, and there's a balanced DI output on an XLR for feeding to a PA or to a Jam 150 Extension unit, which is essentially identical to the Jam 150 but omitting the mixer section. The four effects are preset and can be stepped through using a button with four LEDs denoting the current choice. There are three reverbs, all good quality and musically sensible, plus a preset delay. I'd have liked a tap tempo button but the preset delay time is reasonably vocal friendly. Mains comes in on a standard IEC socket on the rear panel below the finned heatsink and a small toggle activates the ground lift if needed.

I Think, Therefore I Jam

While the technical spec says that the frequency response runs from 60Hz to 18kHz (±3dB), the depth of bass this little speaker is capable of reproducing makes it feel as though it goes rather lower. There's no published SPL figure but I managed to get as much usable volume out of this amplifier as from some of the compact PA speakers I've looked at, which have crazily high-powered amplifiers on board — and with the Jam 150 producing a generally cleaner sound. With pre-recorded music, the sound is close to what you'd expect from a studio monitor or hi-fi speaker, with great clarity and a well-focused mid-range. It handles microphones very well too, the three-band EQ and well-chosen reverbs making it easy to get a polished and clear sound.

With acoustic guitars, much depends on the pickup system you have, as the mixer section is tonally very honest, so if you have a nasty and quacky piezo system there's little you can do to hide it other than use the EQ to soften the edge slightly. With a decent piezo under-bridge system, however, or one that also includes a blend of in-body microphone, the sound is big and powerful with plenty of thump at the bass end and all the detail you could wish for in the highs. 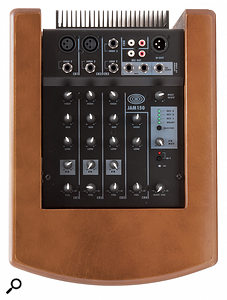 The Jam 150's mixer section resides on the amp's top panel, and can accommodate up to four inputs.With the Jam 150 Extension speaker slaved from the DI output, the combo is transformed into a very loud, very compact 300W PA system capable of keeping the vocals above the level of a band playing a small-ish venue. As the onboard mixer is mono, adding the second speaker doesn't give you stereo, but you could of course use a small external mixer to feed two Jam 150 Extension speakers to give you stereo should you need it, and given the low cost these days of small mixers with built-in effects, that could form the basis of a very high-quality, modestly priced and very portable PA system.

As you can probably tell, I'm rather impressed by this little amplifier, and other than the lack of a tap-tempo delay button I can't fault it. It costs less than the more obvious market leaders in this area, yet it could hold its own against any of them. It is also built to last, but the optional soft case would be well worth investing in, as that will keep the amplifier looking at its best.

The Jam 150 is ideal for use in an acoustic band or duo, but used with the Jam 150 Extension speaker it's also up to the job of handling vocals and non-bass instruments for an electric band. Its simplicity of operation should also endear it to schools, dance groups and anyone looking for a portable sound system capable of delivering high-quality sound.

The closest alternatives are acoustic guitar amplifiers with mic inputs and basic mixing capabilities built in, such as those from AER and Fishman, with other models available from the likes of Laney, Vox and Marshall.

While not the cheapest amplifier of its type, the Jam 150 is far from the most expensive, yet it stands comparison with pretty much anything out there. It is also very versatile, and when partnered with the Jam 150 Extension speaker it turns into a small but powerful PA system.