Can you really obtain a realistic acoustic guitar sound from a pickup? With Schertler's latest offering, it seems that you can...

Magnetic soundhole acoustic-guitar pickups have a long history, with the oldest examples that I can find being the ES75 and ES96 that appeared in the 1936 Gibson catalogue. By the late '50s the DeArmond company had perfected the legendary RH series of soundhole pickups that were used to great effect in the early '70s by bands such as the Eagles. (If my memory serves me well, it was the Eagles who, in the 1970s, first started using a magnetic soundhole pickup in conjunction with an internally mounted microphone in order to more accurately amplify their acoustic guitars.)

Things have moved on considerably since then, though, and several manufacturers offer combination pickups in which a magnetic soundhole pickup, a condenser microphone, active electronics and miniature batteries are mounted together in the one housing. Schertler, a Swiss company best known for their dynamic and electrostatic acoustic instrument pickups and preamps, have now entered the fray with their Magnetico Series AG6. This soundhole pickup features an additional input for the dedicated S-MIC-M miniature condenser microphone or the forthcoming Reso-Coil-M contact pickup, and is available both in basic black and in a limited-edition wood-laminate finish.

In shape, the Magnetico AG6 follows the common soundhole-pickup paradigm — it's a bar with angled ends — but the sides have a pronounced curve, which is necessitated by the diameter of the CR2032 3V lithium battery that's mounted horizontally on the pickup's underside. The pickup itself is shallower than some and the sides of its black plastic casing have a smooth, almost velvety, surface texture. The pickup fits easily into soundholes of 4.5-inch (11cm) diameter and above, and the securing clamps can be disassembled and reassembled in situ in order to drop the AG6 into smaller soundholes (down to 3.5-inch/9cm diameter).

At one end, furthest from the player, two stereo mini-jacks carry the input for the optional microphone or pickup and the pickup's output. 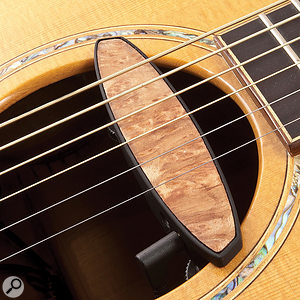 At the other end sit the level controls for the optional source and for overall volume. Supplied with the AG6 is a mini-jack to stereo end-pin jack assembly, to allow permanent mounting inside your guitar. It's impossible to obtain separate outputs, as a mono jack inserted into the end-pin jack switches the pickup on and carries the mix of magnetic pickup and any fitted option. A 32-inch/80cm-long cable with a stereo mini-jack at one end an a stereo quarter-inch line socket at the other is available for temporary fitting.

The pickup itself is made up of six separate coils and magnets, each feeding an individual, all-discrete component, low-impedance, Class-A preamplifier. This setup gives the AG6 a flat frequency response between 0Hz and 40kHz, a dynamic range of 68dB and a battery life of 120 hours playing time.

Once fitted to a guitar and plugged into a good acoustic amplifier, the AG6 was a revelation. Unlike several other magnetic soundhole pickups, the Schertler is only slightly microphonic, doesn't pick up any hum and retains an 'acoustic' character all the way up the fingerboard at any sensible volume. String-to-string balance and definition is very good indeed, which makes for a pickup that's as adept at reproducing complex finger-style lines as it is at maintaining note definition in heavily strummed chords. A neutral balance overall also means that the AG6 doesn't impose a character on the guitar. With the S-MIC-M condenser mic option in place and blended in to add a bit of reality to the proceedings, the combination produced a very usable sound that accurately reflected the acoustic signature of the guitar that I was using (a 1979 Larrivee C72). With the microphone in use, the guitar's susceptibility to feedback increases but that can always be dealt with if necessary. Auditioning the AG6 on several other guitars produced similarly satisfactory sonic outcomes.

As their first foray into the world of magnetic acoustic guitar pickups, Schertler's Magnetico AG6 is a seriously impressive debut. Not only does it combine innovative design with high-end, discrete electronics to produce an extremely high sound quality, but also the AG6 manages to pull off the trick of maintaining the overall character of each guitar to which it is fitted, especially when partnered with the optional microphone. Although the dedicated Reso-Coil pickup option is not yet available, I would expect the combination to deliver a similar level of performance that can also cope with higher on-stage volume levels.

Given their price and performance, the Schertler Magnetico AG6 and its options form an extremely competitive package that will undoubtedly make its competition sit up and take notice. Acoustic guitarists should do likewise. Bob Thomas