Schertler's Unico portable acoustic amplifier is something of a stand-alone PA in disguise.

Think of high-end acoustic guitar amps and you might not think of Schertler, but though they may be better known for their acoustic instrument transducers, this Swiss company also build some seriously nice amplifiers. 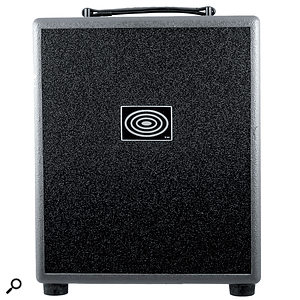 First introduced in 2003, Schertler's Unico Classic acoustic amp was updated in 2010 with a higher power rating and an improved speaker system. Now delivering a total of 200W, the Unico Classic is housed in a compact plywood cabinet that measures 34 x 31 x 43 cm and weighs just 15.4kg. This incarnation of the Unico has the same mixer layout as its predecessors, with three independent channels and a master section. The only effect on board is reverb, which is produced by a real-life spring rather than a digital emulation.

Sound is delivered by an eight-inch woofer and a one-inch-dome tweeter. The amp is split in two, with 150W feeding the woofer and 35W powering the dome tweeter. Quoted frequency response is 40Hz to 22kHz, and the operating voltage can be switched between 110V and 230V, which is useful.

All the edges and corners of the ply enclosure are rounded (although there are no corner protectors), and a tough and textured paint finish has been applied. The cabinet also has a 'top hat' fitted to the base, so it can be mounted on a standard speaker pole when necessary. The metal grille that protects the speakers is now foam-fronted (as opposed to the exposed metal grille of earlier versions), and there's a carrying handle on the top, as opposed to the side-mounted handles of earlier modes. A very nice padded carrying bag is also available as an optional extra. I don't know about you, but I really miss the days when amps came with covers or bags as standard!

Safely recessed into the top of the unit is the control panel. It's set out in a similar way to a conventional mixer, except that the channels are labelled Mic, Dyn and Stat. There's plenty of space around the controls, and the conical rubber knobs have a nice feel. Unfortunately, they aren't centre detented, and I also found the legending rather difficult to read under subdued lighting. I found I had to use an LED torch.

The Mic channel, which has a single XLR input, includes switchable 48V phantom power and controls for gain, high and low shelving equalisation and a pair of mid-range frequency controls, all offering a more than adequate range of cut and boost. The 'Rev' control on all three channels adjusts the amount of spring reverb added to the channel, while the volume knob acts just as the channel fader would on a typical mixer: adjusting the level of the signal sent to the main master channel.

Less obvious than the mic channel, perhaps, are the other two channels, which include the Dyn channel, designed for Schertler Dyn transducers. In reality this channel is pretty versatile: it's fitted with a Neutrik Combo XLR and jack connector, so it can accept a second mic or line-level pickup input if you don't happen to have a Dyn transducer. 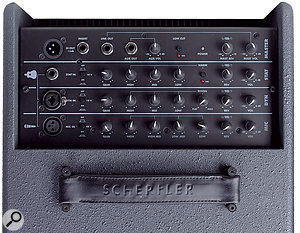 The Unico's controls are laid out in a logical manner, split into four channels: three inputs and a master.The control layout is essentially the same as that of the mic channel, except that there's only one mid-range control, plus a variable-bandwidth notch control fixed at 180Hz, designed to help control acoustic feedback. On this channel, the phantom power offers only 10V, not 48V, as this is the voltage Schertler's Dyn active pickup (and some other third-party active pickup) systems require.

The third channel, Stat, refers to Schertler's Stat bridge-mount transducers, designed for bowed-string instruments, although this, too, is perfectly optimised for third-party active acoustic pickups. Our 'on the road' test used a Takamine guitar equipped with a CoolTube preamp, which was plugged into the Stat channel, and worked just fine. The control system of the Stat channel departs only slightly from that of the Dyn channel: there's a three-band EQ with no notch filter, plus a 'warm' button to boost the low end. I'd have liked to see some basic LED input-level metering on the channels, or at least clip indicator LEDs, but unfortunately none are provided.

In the master section are controls for master volume, reverb and 'aux', the last control adjusting the level sent to a mono jack output, which allows recording of the mix or an adjustable feed to an active speaker, perhaps one without its own level control. There's a TRS insert jack for adding master effects or processing (or for connecting Schertler's own volume pedal), as well as a line-out jack and a balanced XLR DI output.

A low-cut switch is provided to allow the Unico to work with an active subwoofer, to create a full-range system. The cutoff frequency of 150Hz is too high for use as a general low-cut control, though, and the DI and line outputs are not affected by the low-cut switch.

Unico On The Road

So off to the pub gig we went, to test the Unico as an acoustic guitar and vocal amp, taking along a small Mackie powered monitor. Fed from the DI output, this monitor was used to reinforce the Schertler, and was placed further into the room in order to give us a little more 'spread'.

With only a little EQ tweaking, we managed to produce a really natural sound from the Takamine, while the vocals also sounded very true and clean. There was plenty of level available from the amp, with the audio feedback threshold being reached way before the amp showed any sign of labouring or overloading.

The spring reverb worked fine and just as you'd expect a spring reverb to, but by its nature it was rather inflexible: the coloration of a spring doesn't suit everything. A simple digital delay and reverb processor would have made more sense to me, though I appreciate that some guitar and violin players feel more comfortable with the organic sound of a spring. If you knock the amp, though, the spring twangs in the time-honoured way, something that won't happen with a digital emulation.

At its heart, the Unico is a simple amplifier designed to deliver a clean, accurate sound, and it provides the controls to do exactly what is necessary without any frills. Both the guitarist and myself were extremely impressed by the volume and clarity of the vocal and guitar sound that we could achieve, all using very little adjustment of the EQ.

As a clean and natural acoustic instrument amp, as well as a main source of amplification for small acoustic gigs, the Schertler Unico stands comparison with anything currently on the market. It gets an unequivocal thumbs-up from me both in terms of sound quality and portability.

Most of the major guitar-amp manufacturers are now making acoustic amps, but Schertler's closest competitors in this market sector are AER and Fishman.

The Schertler Unico is a thoroughly professional and solidly engineered acoustic amplifier, capable of reproducing very natural vocal and acoustic instrument sounds at a surprisingly loud level. Some users may want to add their own effects, as the on-board spring — good though it is — is fairly limited. The three mixer channels, in particular, make the amp very flexible.