Clavinets are a bit like Marmite. We love to own them, to play them, and to listen to them, but we hate storing them and maintaining them. (Digging out and replacing 60 tips that have decayed to gloop is no fun, believe me.) Perhaps that explains why there's such a glut of Clavinet emulations on the market, ranging from the most basic PCM-based patches to the sophisticated physical models offered by some flagship workstations and software plug-ins. So, is there room for another?

The short answer is, 'heck, yes'. I compared the Soniccouture Clav (which is supplied as an instrument for Kontakt 5) with both an E7 and the Clavinet in a Hohner Duo, and I was shocked at how aged and scruffy the originals sounded in comparison. That's not to imply that Clav is in any way anaemic. Far from it... the various pickup and tone combinations are beautifully sampled, and it oozes a clean, lucent character in the way that you always hoped your Clavinet did when it first rolled off the production line in the 1960s or '70s.

In addition to the basic sounds, Clav offers a damper control (although, admittedly, this only offers two positions: on and off) plus variable key-off amount so that, if the mood strikes, you can make it sound marginally decrepit. There's even a NKI that imitates the mild pressure-sensitivity of original Clavinets, which go sharp if you press the key harder after playing the note. Sure, it isn't not going to 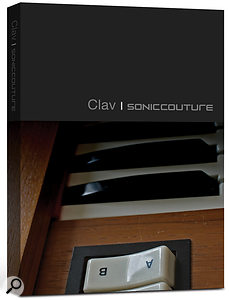 sound identical to your original instrument — the vagaries of Clavinet mechanics, electronics and tuning are going to ensure that — but I suspect that it's often going to sound nicer. The only thing that I found a bit odd was the virtual 'wiring' of the AB/CD switches, which differs from both my models. However, the Soniccouture combinations conform to the documentation on www.clavinet.com, and it's not a problem either way.

In addition to the sound generator, Clav also offers a velocity-sensitive low-pass filter with a dedicated ADSR contour generator, a static (but very useful) high-pass filter, independent levels and pans for the two pickups, programmable velocity sensitivity, and no fewer than 10 dedicated effects. These are auto-wah, auto-pan, chorus, phaser, delay and reverb, a compressor, speaker emulation, a three-band EQ and overdrive. Simple they may be, but I found them to be very useable. For example, I loved playing my first Clavinet through a Roland CE1 into a WEM amp and 2 x 12 cabinet, and the overall effect (if not the actual sound) is nicely recreated. But if you don't like the inbuilt effects, just remind yourself that the original had none, and then connect the external ones you want, whether in hardware or software.

I must admit to being impressed with Clav. I know that I'm going to feel weird for writing this but, next time I need some Clavinet sounds, I'm going to leave the Hohners at home and take my MacBook Pro instead. Gordon Reid