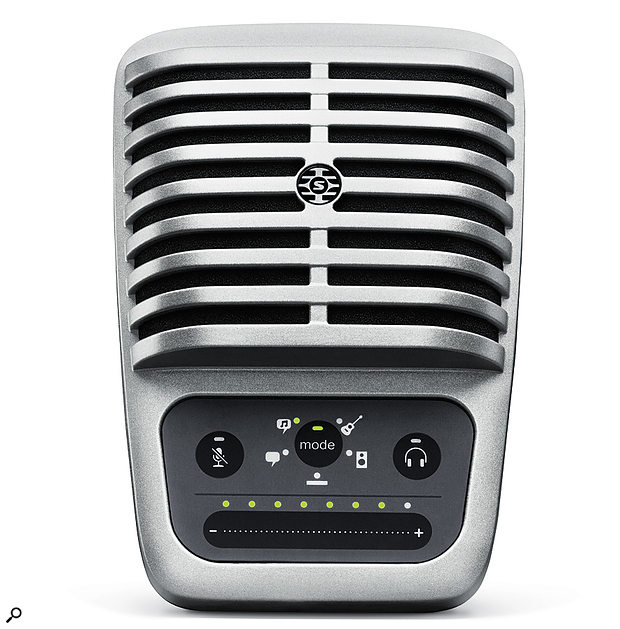 Back in the 1950s, one of Shure’s most popular mics was the Model 51 Sonodyne, which had a distinctive design fashioned to look like the impressive car grilles of the era. Built like a tank and designed for general-purpose use, the mic sold well in the US, and is now seen as a bit of a design classic. The new MV51 has been carefully crafted to resemble the iconic Model 51 and shares the same profile, grille and excessively robust metal frame. It’s a bit of an all-rounder too, tailored for speech, vocals, acoustic instruments and band recording. The similarities end there, however, for the new mic is designed specifically for use with Lightning-equipped iOS devices. It also ships with a USB lead for connecting non iOS hardware, and is compatible with both Windows and Macintosh systems.

Bellow its grille, where the old Model 51 had a low-to-medium-to-high impedance selector screw, there is a touch-sensitive panel of controls, allowing the user to change microphone sensitivity and headphone output levels (there’s a mini-jack headphone socket on the back), mute the input, and select the recording mode preset (the five options being Speech, Singing, Quiet and Acoustic Music, Loud Music or Band, and Flat). If Shure’s Motiv app is installed on the connected iOS device, the mode and input level can be controlled remotely, and there is the opportunity to set up an EQ, compressor and limiter. Unfortunately the app doesn’t support mulitracking at the moment, but recording a stereo track is very easy to do.

Ergonomically, the mic has some strong points. On the back there is a short leg with a rubberised foot, which very sturdily props the mic body at an angle so that it can be used on a desktop by podcasters and the like. Alternatively, the foot component can be unscrewed and removed to reveal a threaded socket that’s compatible with mic-stand adaptors.

Spec-wise, the mic is designed around an electret condenser assembly with a one-inch diaphragm. The polar pattern it produces is cardioid and its frequency range is 20Hz to 20KHz. SPL handling is rated at 130dB, which should be ample for band recording.

At first I tried to record to my PC via USB, but couldn’t get my DAWs to hear anything, although the mic’s touch panel lit up and seemed to function properly. I suspect Windows 10 might have caused the problem, because everything worked fine when I used the supplied Lightning cable to record to an iPad Air 1 via Shure’s Motiv app.

As one would expect from a general-purpose mic, recordings made with the MV51 are well balanced and fairly neutral. When placed in front of a guitar cab, the mic does a good job, but its front-facing touch panel is unusable in that position, and having an iPad attached via the short Lightning cable is not very practical. On vocals and speech it performs well and could easily serve for song demo recording or podcasting, particularly as the self-noise level is impressively low. The presets are helpful when time is tight, but best results are achieved by making custom settings, or recording flat and then processing in a DAW.

In conclusion, this is a solidly built product that turns in a decent performance for a very reasonable price.