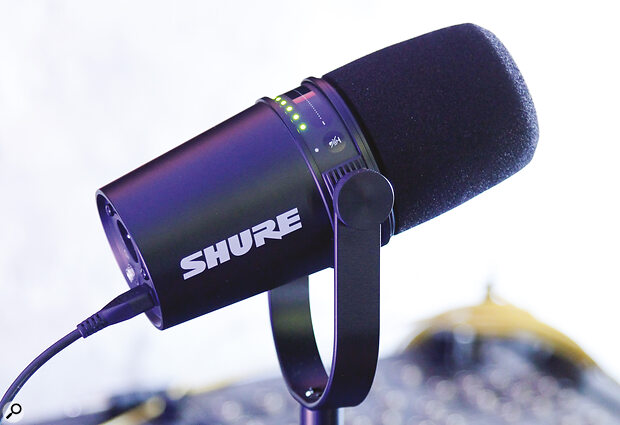 The market for podcasting mics has exploded in the last few years, as I discovered when I wrote our USB microphone roundup back in June 2020 (https://sosm.ag/usb-microphone-roundup). The boom was partially fuelled by lockdown, which saw podcasting becoming a major new pastime, alongside a huge increase in the use of web‑chat platforms like Skype, Discord and Zoom, and also by the growing number of people live‑streaming video games. Many of the new generation of USB podcasting mics are thus marketed variously as entry‑level microphones, home office accessories, or gamer peripherals.

The professional end of podcasting, however, remains dominated by a few decades‑old models, most notably the Shure SM7b. Already a stalwart in radio and voiceover circles, the SM7b has become the mic of choice for some of the biggest names in podcasting. Perhaps sensing a gap in the ‘semi‑pro’ market, Shure’s newest microphone is said to be ‘inspired by’ the SM7b, yet is considerably more affordable, and offers some handy features that should appeal to both experienced and novice podcasters alike.

The family resemblance to the SM7b is undeniable, and the MV7 feels similarly well made and robust, though it is noticeably shorter and lighter. The MV7’s bottom panel reveals its dual nature: in addition to its XLR output, it sports a USB port and a headphone socket. Used as a standard XLR microphone, the MV7 works much as you’d expect a dynamic mic to: it requires no phantom power, and has a pretty modest output level — though not as low as the SM7b’s meagre 1.1mV/Pa (one of that mic’s only real downsides, and necessitating either a very good preamp or an inline booster). The MV7’s sensitivity is 1.8mV/Pa, which is roughly comparable to that of another Shure classic, the SM57.

Connect the mic to a computer or mobile device (Android/iOS) with Shure’s MOTIV app installed, and a number of extra features become available. The most obvious functions — microphone mute, headphone level, and direct monitoring blend — can be controlled on the mic itself, using a touch‑sensitive strip that runs across the side of the mic, but the app opens up more options.

At the top of the MOTIV UI is a slider that lets you choose between ‘Auto‑Level’ and ‘Manual’ modes. In the former, you get controls for mic mute, monitor mix, near or far mic placement, and a selection of three tone options. The Dark, Natural and Bright settings act much as you’d expect, though for more detailed control you’re best off in Manual mode. Here, in addition to the monitor mix and mic mute controls, you get a continuously variable mic gain slider, four EQ options (flat, high‑pass, presence boost and a combined high‑pass filter and presence boost), a limiter on/off switch, and a compression slider, again with four settings: off, light, medium and heavy. These features all work very much as you’d expect, and go a long way to making you sound ‘radio ready’ without having to resort to plug‑ins or hardware processors. The processed sound is what’s fed back to the headphone output, so you can hear the effect of the compression and EQ while you’re recording, but it’s worth noting that this processing doesn’t affect the XLR output, only the USB stream.

The processing options available in the MOTIV app are very well judged, to the extent that I’d be more than happy to record with them on rather than play it safe and add processing afterwards.

Finally, there is a preset system built into the MOTIV app, so that once you’ve found a setting that works on your (or a guest’s) voice, you can save it, naming the preset after the speaker for instant recall.

The raw sound from the mic is much as you’d expect from a premium dynamic: refined, yet usefully curtailed in terms of HF extension. Lip smacks and sibilance are seldom an issue, and you can easily use the proximity effect to your advantage for a bassy, ‘voice of God’ sound if that’s what you’re after. The pickup pattern is also usefully tight; indeed the spec sheet shows it to be extremely similar to that of the SM7b.

The processing options available in the MOTIV app are very well judged, to the extent that I’d be more than happy to record with them on to save time, rather than play it safe and add processing afterwards.Overall, I think Shure are onto a winner with the MV7. Novice recordists will benefit from the ‘can’t go wrong’ compression and tonal options, while fans of dynamic broadcast mics will feel very much at home plugging the MV7 into their mixers, preamps or interfaces.

A high‑quality podcasting mic that will appeal to both professional and amateur users alike.