Hosted by Steinberg’s free Halion Sonic SE 3.4 (or later) sample player as well as Halion 6 and Halion Sonic 6, the Zaria sound library is based on evocative female vocal sounds performed by soprano Roksana Korban. Some follow the traditional sustained‑note route, some presented as gentle vocal stabs and others treated to become ethereal pad sounds. Sonic Atoms describe the genre as cinematic and ambient, which seems as good a description as any. This is not a traditional vocal library in that it is more about texture and ambience than creating realistic lead melodies, though the samples are musically pitched and playable as such. Halion’s free Sonic SE 3.4 player is easy enough use and supports AU, AXX and VST 2/3 hosts as well as operating in standalone mode. Effects can also be added within Halion Sonic SE, though in this instance, the sounds are so rich that piling on further effects will often be too much. 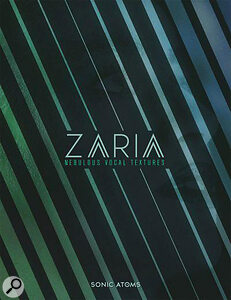 Zaria’s patches are categorised as Pads, Atoms and Performance Programs, the latter comprising layers, spread across the keyboard: low organic pads, vocal performances split according to key range offering multiple articulations, and a high pad. Articulations are independently switchable directly from the GUI or by key‑switching. Reversed versions are included to add some textural variety.

The Pads are all vocal‑based and seem to have quite a lot of reverb baked into them, so you don’t need much in the way of additional processing to make them sound good, although in some situations you might want to apply some low‑cut EQ to thin them out a bit. They all sound organic and mostly calming, though some include just a hint of chaos or disquiet. Being vocal‑based, there is a certain family sameness to them but the designers have done what they can to coax as much variety as possible out of the pad section.

The Atoms patches cover more discrete melodic sounds based on different vowels, breaths and other utterances, plus some sustained vowel sounds that have a useful degree of movement built into them. Single Atom programs also offer articulation control.

With so many vocal sample libraries around, you might wonder if Zaria can bring anything new to the table, but it actually provides a palette of lovely sounds that would slot well into soundtrack, ambient or chillout compositions with the shorter Atom sounds offering something a little different from the usual choral ‘oohs’ and ‘ahhs’. And it does so at a very modest price. In some cases I would have appreciated some drier sounds so that I could use my own processing, but in the main the sounds on offer are very polished and instantly usable.