While many plug-in developers busy themselves with yet more vintage EQ or compressor emulations, others, thank goodness, continue to dream up novel and interesting processors that are harder to pigeonhole. Among them are Sweden-based SonicCharge, whose Permut8 is a delay plug-in — but not as we know it, Captain. The wet signal is processed at 12-bit resolution, with a variable sample rate of anything between 0 and 352 kHz, so character can arise from digital word-length degradation alone. But the real fun is delivered in the form of two 'Instruction' generators which, individually or together, determine at what position within the buffer the delayed signal is sourced. They often cause the position to jump around, oscillate backwards and forwards, or to cycle through the entire buffer at a different rate from that at which your live input is feeding it — all tempo-sync'ed if you like. All manner of pitch-shifts, beat repeats, stutters, granular glitches and howling, teeth-gnashing aliasing can ensue, so the inclusion of an onboard limiter/clipper and variable low/high-pass filter was a wise choice, as much to tame down the more extreme treatments as to allow subtle shaping. 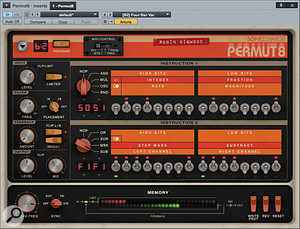 Permut8's playfully dated interface is a homage to a 1960s computer, the PDP8, and is utterly bewildering initially. For some users it may stay that way forever. But I think that's all part of the experience, and not necessarily a bad thing. It's as if you've discovered some crazy old hardware box whose invitingly tweakable knobs and switches control unguessable functions, generating an endless stream of interesting timbres.

However, if you're prepared to read the concise manual and experiment a bit, you quickly find that Permut8 is eminently controllable, and usable for even quite conventional effects. For example, if you turn Instruction 1 off by turning its knob to the NOP ('No Operation') position, and then set Instruction 2's knob to SUB mode, you can achieve a simple, basic delay, with separate times for the left and right channels. You're SUB-tracting (think 'offsetting') the point at which the delay buffer is read (represented by a green LED in the Memory section) from the real-time input (the red LED). Meanwhile, Instruction 1's OSC mode causes the buffer's read position to (wait for it…) OSC-illate, generating vibrato, phasing and chorus effects. In these modes and the more complex ones, Instruction parameter values are set with those front panel (and optionally MIDI-controlled) toggle switches, their on/off states defining an eight-bit binary number. All rather obtuse, maybe, but in a fascinating way.

In summary then, Permut8 is bonkers, but also refreshingly unique, great-sounding, and more flexible than you might think. For those working in electronic genres it could prove an indispensable tool. The broader user experience is good too: stability was faultless across a range of Mac DAWs I used for testing, preset program banks are properly implemented and handled, and the man behind the plug-in, Magnus Lidström, is very active within the user base that congregates around the SonicCharge web site. Robin Bigwood

Mastering Essentials Part 3 - How loud should I master?
1 week 2 days ago.