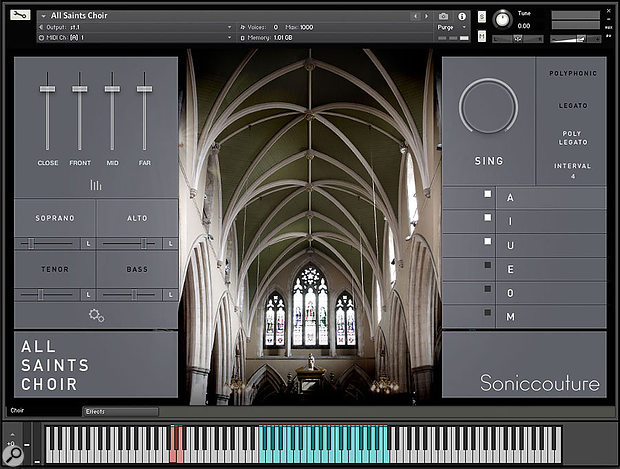 Scrubbed up and clad in my Sunday best, I'm off to All Saints Church, Tooting, to take in the latest offering from UK company Soniccouture. Performed by the New London Chamber Choir (a mixed-voice ensemble specialising in contemporary repertoire) and conducted by Margaret O'Shea, this choir sample library was recorded by Adaq Khan from four mic positions. The 32 singers were recorded in soprano, alto, tenor and bass sections, each on a separate day, so you can mix and pan them in whatever way you like.

This large church was a prime location for classical recording back in the day and, listening to the ambience surrounding the singers, it's easy to see why Soniccouture were keen to record there. The sumptuous, cathedral-like reverb, best heard in the 'far' mic position 10 metres or so back from the choir, adds a beautiful floating quality, while the closer cardioid and omni mics capture the space's full-bodied sonic character.

Cutting to the chase, this is undoubtedly one of the nicest choir sample libraries I've heard: the soft, sweet, natural tone of the sopranos and altos is very affecting, and their voices sound all the better for the lack of an overdone 'classical' vibrato. As ever in sampled choirs, the male tenors and basses sound more lusty and somewhat indignant, but that's OK — when you're adding a choir to a film cue depicting armies of orcs battling with giant werewolves, you need a bit of testosterone.

Over the years I've been reviewing Soniccouture's libraries, the company have never put a foot wrong.

The singers use the vowel sounds 'a' (ah), 'i' (ee), 'u' (soft ooh), 'e' (eh), 'o' (oh) and a nice humming 'mm'. No consonants are included (I didn't miss them). A big 'Sing' knob, assignable to the mod wheel, controls the balance between the soft and loud dynamic (tip: use the latter for the orcs and werewolves scene), and melody lines benefit from an excellent true legato mode which can be polyphonic or monophonic. A separate window shows a comprehensive list of effects inserts, including convolution reverb impulse responses recorded at the church.

In addition to various transformative snapshot presets, some delightful weirdness is on hand in the form of the cluster generator, which creates custom cluster chords of up to 12 detuned voices. Creepy to the max and great for sci-fi and horror scores, I was also able to use it to create some nice big diatonic chord voicings. The library (9GB installed) runs on Kontakt 6 or the free Kontakt 6 Player, version 6.2 or later.

Over the years I've been reviewing Soniccouture's libraries, the company have never put a foot wrong: their products are invariably well crafted and thoughtfully presented, and they aren't afraid to investigate esoteric, obscure and specialised instruments. Long may this continue — it's good to see a small, intelligent UK outfit holding its own in these challenging times.