Despite never quite attaining the hip status of the Fender Rhodes, the Wurlitzer 200A electric piano has been a favourite with keyboard players since it first appeared on pop hits of the '60s. So, when Massive Attack's producer Neil Davidge told Soniccouture he had "an old Wurli with a dodgy distorting speaker that sounds great”, the UK samplists were quick to negotiate a loan. A Massive sampling session then ensued… 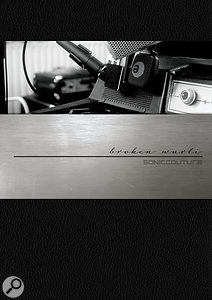 Calling the resulting 8.5GB library 'Broken Wurli' doesn't really do this instrument justice, and we should be thankful that Soniccouture haven't applied the same marketing terminology to a used car business. The piano's left speaker is indeed, as we say in the trade, f***ed, but its other speaker is as good as new. The producers miked up both and also took a DI feed, so you have a choice of super‑clean, moderately lo‑fi and distorted signals.

With nine velocity layers, three round robins and an accurate emulation of the trademark Wurli tremolo, this is a forensic sampling job that captures the instrument's tone all the way from demure, mellow, harp‑like tinklings to strident, reedy stabs. I found the basic instrument's key‑off samples to be over‑loud, but was able to quickly fix that by adjusting one of the nice, big 'virtual shiny metal knobs' that grace its elegant user interface. Other than that minor issue, the default patch (which features the DI and clean‑speaker feeds panned respectively hard left and right) is enormously playable and touch‑sensitive, with no noticeable latency.

Unlike the Rhodes Suitcase model, the original Wurlitzer 200A had no stereo tremolo/vibrato option, but this sampled version does, courtesy of a splendid auto‑pan effect. This can be combined with excellent built‑in chorus, auto‑wah, phaser, Leslie cabinet, stereo delay and convolution reverb effects, to produce glorious, lush electric-piano washes. The producers go to town with these effects in their sound-design section, providing heavenly, ambient, clean textures as well as spiky distorted timbres and funky '70s soul patches.

Funnily enough, I found the 'broken speaker' effect to be one of the less engaging aspects of the library; its fizzy, fuzzbox‑style distortion certainly adds bite and drive to single‑note lines, but on sustained chords it tends to sound merely synthetic. Because each distorted note was sampled separately, you don't get the cumulative effect of multiple notes simultaneously overdriving a speaker. However, that racket can be simulated fairly well by dialling up the onboard distortion and amp-simulator effects.

Thanks are due to contemporary sound companies whose diligent, highly detailed sampling jobs preserve iconic instruments of yesteryear for future generations. We still have an original Wurlitzer 200A in our house, but haven't recorded it this century — and if you notice its distinctive tones on a future track bearing my name, it'll probably be these samples you're hearing. Dave Stewart