Sony's MDR range of closed‑back cans has been popular in studios for years, and now includes a new flagship model. 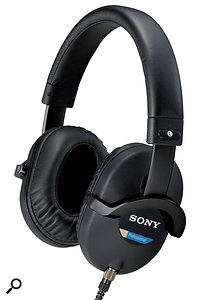 When choosing headphones for mixing and mastering, most people opt for an open‑backed model, as these tend to offer a more natural sound than closed‑back designs. The latter tend sonically towards a slight 'boxiness', but they offer the potential advantages of good isolation from external sounds and lower levels of leakage — qualities that make closed‑back models popular choices for recording artists and recording engineers working on location. In a domestic studio, of course, many people also require a closed‑back model, whether to block out ambient noise when mixing, or simply to keep their cohabitants sane!

So what makes a good closed‑back model for mixing? As well as good isolation and low levels of leakage, what I'm really looking for is a good, fast response across all frequencies, and excellent separation between the different elements in the mix. I can live with a slightly coloured frequency response, as that's something your ears become accustomed to after listening to a range of familiar material, though I prefer a relatively even response. If it's a model that I want to use for general listening as well — and I'd advocate that as a good way of getting your ears used to the sound — then I'll look for a model with a low impedance, so that it can be driven by an iPod or similar consumer device. They also need to be comfortable enough to wear them for long periods: that means that your ears need to be able to 'breathe' and the headphones need to stay on your head as you move, and that they must do so without pinching.

Sony's MDR 7509s have proved a popular choice. They score highly on isolation and leakage, though personally, I've always found them to be a little over‑dominant in, and slightly too 'smoothing' of, the bass end, almost to the point of sluggishness. They seem to me to work well on acoustic or low‑key, laid‑back styles, but they do tend to flatter some mixes, hiding a few problems when working on busy, loud rock music. Sony continue to offer the 7509 but have launched two new models in the range, the less expensive MDR 7510, and the pricier MDR 7520, which is reviewed here.

Sony say the 7520 is a completely new model, but I expected it to at least be similar to the MDR 7509, perhaps sharing a 'family' sound, but with a few subtle improvements. I couldn't have been more wrong! Instead, its DNA seems to be shared with a high‑end hi‑fi model, the MDR Z1000. That's not a model I'm familiar with, but the two certainly look very similar, and the published specifications are almost identical. It may be that they're slightly differently voiced with frequency-response tweaks, I suppose, but the only major differences appear to be cosmetic — there's a different finish (I prefer that of the 7520), and the 7520 has a coiled cord, whereas the Z1000 offers both coiled and straight options. The Z1000 is also more expensive! Not having had my hands on the Z1000s, I'll focus solely on the 7520s.

The 7520's design includes a new 50mm 'high‑definition' driver unit, and Sony say that a liquid‑crystal polymer film helps this reproduce frequencies in an astonishingly wide band — from 5Hz to 80kHz — though unfortunately they don't qualify that with any figures such as ­±3dB points, or frequency response plots. The impedance is quoted as 24Ω, which means they'll work with most consumer, as well as professional, gear. The housing is made of a lightweight magnesium alloy, and the urethane earpads are designed to keep noise out and in, as well as to fit comfortably.

I played a range of reference material on the 7520s over the course of a week or two, and when I felt I'd become sufficiently familiar with them, I set about mixing a track, using the 7520s via a Dangerous D-Box headphone amp as my main monitoring system, and occasionally checking back on my usual nearfields and (via the same headphone amp) my Sennheiser HD650 open-backed headphones. Later, I compared the sound of a few tracks played over the 7520s, the 7509s and the Shure SRH940s, which also happened to be in for review at the time.

The first thing to say is that the fit of the 7520s (on my head, at least) is good: they're nice and snug, there's no pinching, and they fit nicely over the ears rather than pressing on them: very comfortable. The isolation and leakage performance was also decent, but they never felt suffocating, so they've hit my criteria bang on.

On to the sonics, then. Despite sounding very different from my HD650s, the 7520s ticked a lot of my mixing boxes immediately. Not only was I greeted with excellent separation of different elements in a mix (it was easy to hear into reverb tails, to pick out individual elements in a wall of distorted guitars, and to EQ vocals to taste), but the response seemed fast and tight, right across the frequency spectrum. I was able to hear both detailed hi‑hat work and what was going on at the bass end very clearly. You're never going to get that thump of real bass on headphones, as you feel that in your chest as much as hear it with your ears, but the MDR 7520s did as well as I could hope for in a headphone of this type. The only down side is that the level of detail can become a little overwhelming, which is why I rarely like to mix exclusively on good headphones. Counter-intuitively, I find that I sometimes need to be able to ignore little details! Importantly, mix decisions translated pretty well on to other systems, including those about the bass end.

I have few points of criticism. One is that like all closed-back, over-ear headphones, the MDR 7520s impart a certain amount of boxiness to the sound. This was always noticeable, but not offputting, and it never really compromised my decision‑making. Also, these are pricier than most of the competition — but I think they're also rather better, and the price is nothing compared with nearfield monitors of similar quality. I'd much rather rely on these than on cheap nearfields any day! Highly recommended.

The MDR 7520 is an excellent pair of closed‑back headphones for studio monitoring duties, with a reliable, albeit loud, bass end and excellent separation — and they're happy being driven by an iPod too, so you'll be able to get familiar with their sound very quickly!