Tom Erbe's Soundhack processors have been around since 1991, and are described on the company's web site as "Essential tools for adventurous musicians and sound designers”. The original Soundhack program has collected many fans, from Trent Reznor to Ry Cooder, and its collection of filters and spectral manipulation techniques has been used on films such as The Matrix and The City Of Lost Children. Since 2000, Erbe has also been spinning off the technology behind Soundhack in various plug‑ins. So far, there have been three bundles, all containing plug‑ins based around similar themes: the Delay Trio, for example, contains a delay, a pitch delay and the enigmatically titled Bubbler. The Soundhack plug‑ins are available for Mac, in VST, AU and RTAS versions, and as VST plug‑ins for Windows.

Erbe's new collection is the Pvoc Kit. This is a collection of plug‑ins that use the Soundhack phase vocoder and granular synthesis algorithms to stretch time, shift pitch and distort phase. The phase vocoder works by sampling the incoming signal and dividing it into blocks; each block is, in turn, divided into different frequency bands. The number of frequency bands and the number of samples in each block are linked, so there is a constant trade‑off between frequency response and transient (time) response. The granular synthesis program also divides the sound into small segments or grains, but doesn't divide it by frequency.

Each plug‑in has a 'bands' control that governs this ratio. At 44100Hz, the sweet spot is between 1024 and 2048 bands, giving you a smooth frequency response and a reasonably fast transient response; in other words, conventional pitch‑shifting and time‑stretching with relatively few artifacts. But where's the fun in that? Increasing the band rate above 2048 will give you finer pitch resolution but at the cost of smearing the sound, reducing the resolution of the time transients. This is, as Erbe points out, great for making ambient washes and drone sounds. Setting the rate lower, meanwhile, will allow multiple harmonics to enter individual bands and will increase the amount of cross‑modulation and frequency distortion. A world of more aggressive sounds then opens up.

The first plug‑in of the bundle is +pitchsift, a classic phase‑vocoder‑based pitch‑shifter. Able to shift up or down by up to four octaves, it has the ability to transform sound beyond recognition. In its 'sensible' setting, with bands set between 1024 and 2048 and pitch‑shifts less than an octave, it behaves like a normal high‑quality processor, although it does have the choice of two modes that give slightly different sounds and — be warned — have very different CPU needs. The first uses a bank of sine‑wave oscillators, with each block of samples controlling one oscillator's amplitude and frequency. The more bands, the greater the CPU drain, so a partial gate control is added, which removes harmonics below a particular threshold level. This harmonic gating can, at extreme settings, reduce the sound to just a small number of sine waves, with interesting results. The other method uses an inverse FFT (Fast Fourier Transform) algorithm to produce a similar result.

When you select 'MIDI vocoder', the plug‑in uses an incoming MIDI note to create a list of harmonics, the number of which is selected by the 'MIDI harmonics' control. The pitch‑shifted sound is then compared to this list and the frequencies that lie between the highest and lowest notes are shifted to the nearest harmonic of the MIDI notes being played. This effect varies from a harmoniser to a weird harmonic auto‑tuner. 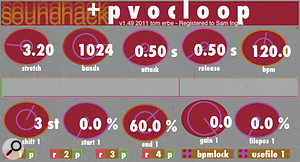 The next plug‑in is +spiral stretch. This is a multi‑layered, real‑time stretcher. Once again the sound is segmented and then layered, and, again, two methods are used: the phase vocoder and granular synthesis algorithms. Switching between the two can really help you decide which suits the material best. With the granular algorithm, you can also control the grain size and 'shimmer'. Larger grain sizes will create stuttering sounds, and the shimmer adds a randomness to the grain distribution that's easier to hear than to explain — the name 'shimmer' is a good start!

The +phasemash plug‑in is described as a "collection of simple transformations to phase difference and band assignment”, and is a great little phase‑based sound‑masher. Press the Scramble button and it randomly reassigns the bands. Take a sound and mash it up!

Lastly there's +pvocloop, which, as you will probably have worked out, is a time‑stretching, pitch‑shifting looper. It can loop four voices at a time, each up to 11.8 seconds long (at 44.1kHz), either by sampling the input or loading in WAV or AIFF sound files. These can then be altered in many ways, stretched and manipulated by the plug‑ins' algorithms, They can be linked to tempo using the bpm control and altered over MIDI (all the plug‑ins offer MIDI control of parameters, so are easily manipulated live).

So do they live up to expectations? Well, yes! The ability to deconstruct sounds and manipulate them is both useful and very enjoyable. The bundle takes very powerful algorithms and breaks them into simple, comprehensible plug‑ins with controls that are task‑specific and easy to use. Switching between the different modes makes it easy to find better ways of achieving more pleasing results, and often throws up new directions. I think this set has a home in any creative musician's toolbox. The ability to manipulate sound live, in real time, will also suit these plug‑ins to use in the performance arena for musicians and DJs.

These plug‑ins are well-designed and attractive, offering pitch‑ and time‑based effects that are both practical at normal settings and creative as they approach the extremes!