Steinberg's Sequel is one of many simple but intuitive loop‑based music programs. What's new in version 3 — the sequel to the sequel to Sequel?

VST Amp Rack is a simple but versatile amp simulator.

Steinberg's Sequel is one of several applications which, like Sony's Acid, Apple's GarageBand and Acoustica's Mixcraft, is equipped with tools including integrated time‑stretch and pitch‑shifting for manipulating sampled loops, and supplied with pre‑made libraries of content to play with. Although targeted at beginners, these packages are deceptively powerful, and capable of producing quite professional‑sounding results. Our last encounter with Sequel was back in 2007, when version 1.0 had not long been released. Since then, the application has been updated, as applications will be, and the current version is 3.0. A fair selection of new features has been added, but the price has been kept low and the emphasis remains on ease of use, with beginners on a budget still forming the target audience.

Sequel can be bought as a boxed package or a (large — more than 4GB) download, for Mac OS 10.6 or 10.7, or Windows 7. Earlier operating system versions aren't mentioned in the minimum system requirements, so it's safest to assume they won't work. Sequel is also slightly more demanding of hardware than before: a dual‑core CPU and 2GB of RAM are now considered essential, as is a display resolution of at least 1280 x 800.

As in previous versions, Steinberg use their 'eLicenser' software to handle copy protection. A control-panel application and device driver are installed, and if you have a Steinberg hardware USB dongles (not supplied), you can store your licence on it rather than on the machine itself. Either way, activation requires an Internet connection and is compulsory. You're also invited to register online. Note that the MP3 encoder shipped with Sequel is, disappointingly, a demo, limited to 20 starts, after which a separate licence (£13.95$15.99) must be purchased if you want to export projects as MP3 files.

Version 3.0 adds some new features and streamlines some existing ones, but the program hasn't undergone a radical overhaul — which is fine, because it didn't need one. The user interface is largely unchanged, and remains recognisably similar to previous versions and to its competitors.

The main application window is divided into three panes. The Arrange Zone is in the top left, and is equivalent to the arrangement window in any conventional sequencer: audio and MIDI tracks run left to right along a timeline, while a moving marker indicates the playback position. The Media Bay in the top right is a file browser that allows you to explore the content provided (along with any other sound libraries you possess), audition files and add them to the current project. The Multi Zone along the bottom is a tabbed strip in which a mixture of relevant information and parameters can be displayed; the main mixer appears here, along with effects and instrument parameters, the waveform editor for audio parts, editors for MIDI parts, and so on. The narrow strip along the top of the window where the transport controls live is called the Pilot Zone.

Selecting a MIDI or audio part in the Arrange Zone allows you to access the piano roll or waveform editor, respectively, in the Multi Zone, and to choose insert and/or send effects for that track's mixer channel. New audio and MIDI parts can be recorded from whatever input hardware you happen to have available (your computer's audio inputs, say, or an external MIDI keyboard). External MIDI controllers can also be assigned to application and plug‑in parameters. Audio files are auditioned simply by clicking their names in the Media Bay. Double‑click a file and it will be added to the arrangement on a new audio track, where it can have its start and end points adjusted, be copied and pasted, and so on. MIDI files are handled in pretty much the same way: double‑click one and a MIDI track is automatically created with an appropriate instrument assigned.

The library of supplied MIDI and audio loops makes it possible to sketch out a simple backing track quickly and easily. Vocals or other instruments can then be overdubbed and edited as required, the relative levels adjusted in the Multi Zone's mixer, and the finished project exported as a sound file in either WAV, AIFC, AIFF or OGG formats (or MP3, while the MP3 encoder demo lasts).

So far, so similar. But what's new? Well, the Arranger Track from previous versions of Sequel has been replaced with (or renamed as) the Performance Track, although this still does much the same job. Parts created on the Performance Track are automatically associated with Sequel's Live Pads, which are accessible in the Multi Zone and can be used to trigger jumps between different sections of your composition. In this way, new arrangements can be improvised as you go, in a manner vaguely reminiscent of Ableton's Live. These Performances can be recorded and played back in real time, or created and edited in step time. MP3 files can now be dragged and dropped into an arrangement, and Sequel will automatically detect the tempo — an aid to mashing up or remixing.

Step Envelopes are a new feature of Sequel's sample editor, and provide an easy way to modulate audio loop playback, via a kind of automation.

The new Step Envelopes let you control effect and mixer parameters on a per‑slice basis. Five different Step Envelope types exist: Level, Pan, Decay, Pitch and Reverse. Steps are either auto‑detected from transients such as single hits within drum loops, or imposed in a quarter‑, eighth‑ or 16th‑note grid for less straightforwardly rhythmic sounds. Select the tool corresponding to the desired envelope type and you can either draw in 'ramps' (for instance, with the level tool, to create a crude fade-in or fade-out), or assign discrete values for individual steps. You could, for instance, use the reverse tool to reverse every third step. A Randomize button generates random values for each step, which are applied using the currently selected tool; this is a quick and easy way to produce variations on a loop.

Beat Tracks are a new track type in Sequel 3, and make use of a new editor, the Beat Page, to edit part data in the Multi View.

Beat Tracks, and the Beat Page editor shown here, provide simple and effective tools for drum programming. The Beat Page consists of a simple step sequencer paired with the integrated Groove Agent One drum sampler. The sampler can load up to eight banks of 16 sounds, each one automatically assigned its own 'lane' in the step sequencer. Various ready‑made 'pattern banks' can be selected in the Media Bay. Dragging and dropping a pattern bank into the Arrange Zone automatically creates a new Beat Track. You can also create your own kits by manually loading sound files into the sampler. Each sample can be tuned up or down as required, be reversed, and have amp and filter envelopes applied.

The Beat Page sequencer has 16 steps to a bar, and a button to toggle pattern length between one and two bars. Clicking a step activates it, to trigger the sample assigned to that lane. Dragging up or down adjusts the velocity for a hit, whereupon the activated step changes colour to reflect its value. Shift‑dragging allows you move all hits on a lane backwards or forwards, in step increments. If fixed 16th‑note quantisation is not to your liking, there are various things you can do to loosen it up: the pattern resolution can be switched to triplets; a Swing value can be specified to move alternate hits slightly ahead of or behind the beat; a Flam tool allows you to create a secondary hit just before or just after the activated step; and dragging left or right on an icon beside the sample name allows you to create a small offset, in either direction, for all hits on that lane.

Programming drum patterns on the Beat Page — whether with single hits, loops, or a combination of both — couldn't be much simpler. The supplied sound library includes plenty of usable stuff, and it's easy to mix it up with sounds from your own collection. The Beat Page arguably favours ease of use over flexibility, but that's no bad thing in an application targeted at newcomers.

Sequel has a built‑in sample player for pitched instruments too, derived from Steinberg's HALion software sampler line and dubbed HALion Sonic SE. It is, as you would expect, a rather simplified version of the larger HALion Sonic product, but useful nonetheless. It's a sample‑playback synth rather than a tool for experimental sound‑mangling, but it's easy to use and works well. The supplied sound library is good, and there are enough tweakable parameters, including tuning and transposition, filter and amp envelopes, and built‑in multi‑effects, to allow for lots of variation on the presets. The instrument's Macro Page makes most of the important parameters accessible in one place, and you can save your tweaked patches as '.vstpreset' files. 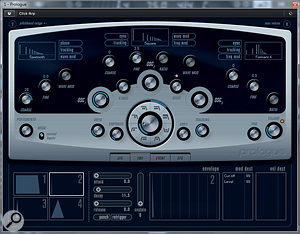 The Prologue virtual synth is one of several additions taken from Steinberg's Cubase DAW. It's a simple but effective synth with three oscillators, a multi‑mode resonant filter, four ADSR envelope generators, two LFOs and some built‑in effects. The presets are generally usable, if not breathtaking. The supplied documentation is minimal, bordering on non‑existent, but the instrument's user interface is large and clear enough that even beginners should feel able to try some tentative tweaking.

Escape From The Planet Of The Sequels 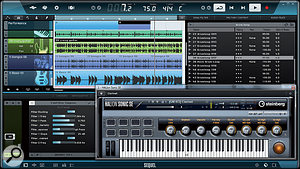 This is a nicely implemented guitar‑amp simulator, capable of producing an impressive range of recognisably classic guitar sounds. Its user interface is clear and simple, with just six control knobs and a large library of usable presets. Many of these include additional effects such as distortion or reverb, represented as miniature stomp boxes, which are not editable.

Both the quality and variety of the sounds on offer is striking, and the clean sounds are every bit as good as the dirty ones, which is not always the case with digital emulations. There are some nice imitations of vintage 'tweed' and 'silverface' combos, for instance, along with the standard rock and metal stacks. In a nice cosmetic touch, the plug‑in's graphics change to match the amp type in use. VST Amp Rack can be used either to liven up sampled guitar parts from the library, or to record new guitar parts, DI'd into your computer. It's as easy to use as a real guitar amp, and does a pretty good job of sounding like one (or, rather, like several).

All the effects and instruments supplied with Sequel are implemented as VST3 plug‑ins, and Sequel now also supports the use of third‑party plug‑ins as well. This is a step forward (it was a rather puzzling omission from earlier versions) and should allow Sequel users to experiment with a wider variety of effects and instruments. Note, however, that only VST3‑format plug‑ins are supported; plug‑ins in the earlier and still much more widespread VST 2.4 format are not.

Sequel 3.0 is a polished package, which does a good job of providing novice users with the tools they need to get started with computer‑based recording and production. The basic building blocks of a composition can be assembled quickly, and simple projects can be brought to fruition without the need for any other tools (except, perhaps, that optional MP3 encoder). There are strong competitors in this field, as mentioned earlier in this review, offering at least comparable features for around the same price, so it would be wise to check out demo versions of the alternatives before making a decision. However, with version 3.0, Steinberg have ensured that Sequel remains deserving of serious consideration.

An already capable package receives some new features and polish. Sequel 3 is nothing revolutionary, but continues to provide a good all‑in‑one solution for people who have been wondering where to start.