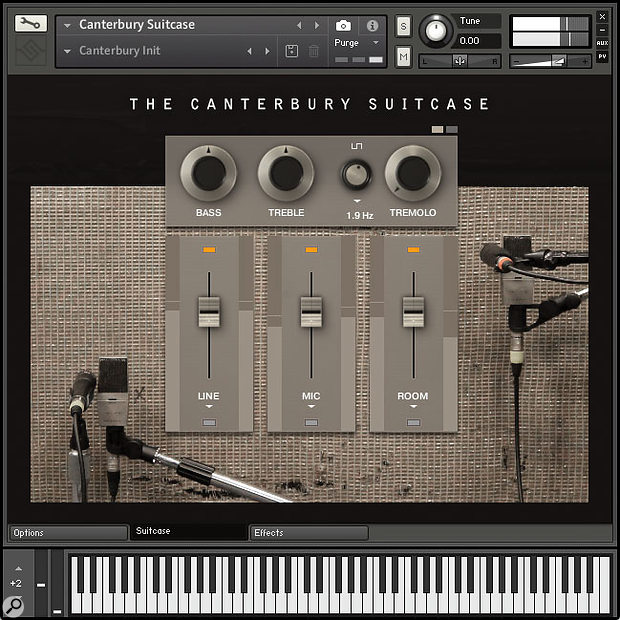 For many, the ultimate Rhodes electric piano was the Mark I Suitcase model. This is the hip, sophisticated keyboard sound we’ve heard gracing countless soul, R&B, jazz and pop tracks for nearly half a century, combining a clear, bell-like attack, a satisfyingly long sustain and a distinctive auto-panning stereo tremolo effect, ideal both for funky workouts and for sensitive, late-night ballad accompaniment. And that’s precisely the sound you’ll get if you buy SonicCouture’s Canterbury Suitcase, featuring 8GB (installed) of deep-sampled vintage Rhodes timbres.

This iconic instrument resides in Toronto’s Canterbury Music Company studio, named by its owner Jeremy Darby after the Kentish cathedral city of his birth. Having conducted a sampling session at the studio in 2012, SonicCouture fell in love with its in-house 1976 Rhodes Suitcase 88 and returned four years later to sample the hell out of it: we’re talking 21 to 25 velocity levels per note with multiple round robins, simultaneously recorded through a direct line out, stereo speaker and room mics. Result: an exquisitely touch-sensitive virtual instrument comprising over 11,000 samples.

Without further ado, let me say that this piano is one of the best sampled Rhodes I’ve heard. I was immediately taken by its strong, pinging ‘bell’ attack, and pleased to find that both the attack and body tone remain consistent across the piano’s seven-octave range, with no dead notes, buzzes or volume dips — the mark of a well-maintained Rhodes. All that remained was to turn off the room mics, use the built-in EQ to enhance top end sparkle, and slap on some chorus and reverb: after that, I was lost to the world for a few hours, happily improvising celestial harmonies on this supremely playable and dynamic instrument.

The library requires Kontakt 5.6.8 and runs on the free Kontakt Player as well as the full version of Kontakt, with activation done online via the efficient, if somewhat intrusive NI Native Access system. There’s only one patch, but once it’s loaded you can access around 90 ‘snapshots’ divided into ‘Cleaner’, ‘Dirtier’ and ‘Experimental’ folders. Some of the latter presets (notably ‘Teutsuri’ and ‘Westminster Ghosts’) generate beautiful, haunting and ethereal overlapping overtones from a single key press, great inspirational timbres for sound-design excursions; the dirty distorted presets would benefit from some extra aggression, readily available from today’s manic guitar processor plug-ins.

In addition to an impressively authentic, head-spinning stereo tremolo, users can add up to six programmable effects, including chorus, phaser, flanger, delay, rotary speaker, filter/auto-wah, distortion, lo-fi and a good speaker cab emulation. There’s also a global reverb featuring a selection of posh halls, rooms, plates, springs and some vintage hardware emulations, including the mighty AMS RMX16 reverb. While these studio-quality effects are a welcome garnish, the main dish is the superior, unadulterated sound of this excellent Rhodes Suitcase piano.