The Chinese gu zheng has been kicking around since 200 BC, making it one of the few historical musical artifacts to predate Cliff Richard. In common with the Japanese koto, the 20‑odd strings of this large zither (tuned to a pentatonic scale and made of nylon‑wound steel) are stretched over a long resonating box on movable bridges, and played with finger picks. Its sound is instantly recognisable: a beautiful, austere, somewhat percussive plucked‑string timbre, immediately evocative of traditional Chinese music and lonely windswept landscapes. 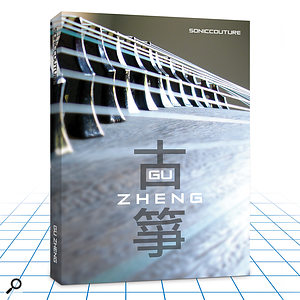 Soniccouture have mapped the zheng's original 21 pitches chromatically over four octaves, so you can play it in any key. However, if you prefer to perform in authentic native style there's a mapping which limits the samples to their original pitches (D, E, F#, A & B). While operating in that mode, an alternative black‑key mapping makes it easy to execute realistic glissando key sweeps, as well as reducing the chances of playing a wrong note when you perform 'Chopsticks'.

The zheng's playing styles are carefully replicated: there's a convincing, mandolin‑like tremolo effect and you can trigger realistic glissandi of any combination of notes simply by pushing up the mod wheel. Brilliant! Pitch bends can be scale‑based rather than fixed‑interval (a musical approach less likely to generate out‑of‑key bent pitches) and may be triggered by aftertouch, which nicely emulates the zheng note‑bending technique of pressing down the string behind the bridge. I was impressed to note that pitch bends apply only to the last note played, so you can bend a single note without overhanging notes also changing pitch.

Overall realism and playability are further enhanced by the provision of up to 11 dynamic levels per note, two or three 'round robin' sample variations and the inclusion of nice reverb and body-resonance impulse responses. I also enjoyed reading the clearly written, pictorially instructive PDF manual.

Soniccouture continue to impress by showing imagination in their choice of instruments, sampling them intensively, and using musically intelligent, simple‑but‑creative programming ideas to make them expressive and fun to play. While Gu Zheng is a must‑have product for media composers engaged on historical Chinese projects, its musical potential is broader, and anyone with an ear for unusual and colourful timbres should enjoy the sonorous tones of this grand, ancient instrument. Dave Stewart