SE tweak their successful design to create what's probably the most affordable serious tube mic around. 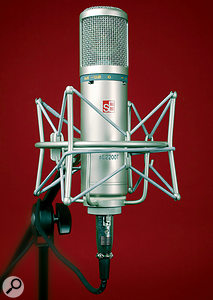 The capsule used in SE's original SE2200 cardioid‑pattern capacitor microphone has proved to be something of a winner for the company, and already the designers have updated the basic mic to the SE2200A by improving the electronics, as well as launching a USB version that plugs straight in to your computer. Now the SE2200T, a valve (or 'tube', hence the 'T' in this mic's name) option has been added to the range.

This SE2200T has its own distinctive tonal character, which is imparted by its dual‑triode tube preamp circuit and output transformer. As with the solid‑state SE2200A, there's a 10dB pad and a bass roll‑off filter, each of which is engaged using horizontally mounted mini toggle‑switches just below the basket. Outwardly, the mic looks quite similar to its solid‑state counterpart, with is cylindrical brass body and simple lines, although it also includes a separate power supply to drive the high‑voltage tube circuitry.

With all the electronics and capsules manufactured in SE's own Shanghai factory, the overall build quality of the fixed‑cardioid pattern 2200T looks reassuringly solid and well finished, with an attractive, satin‑finish plating over solidly machined metalwork. The outer casework for the lower half of the mic can be removed by unscrewing the heavy, machined locking ring at the base of the mic body, to reveal a neat main circuit board housing the necessary resistors and capacitors, with an ECC83 (12AX7) dual‑triode tube, mounted in a porcelain base on its own small circuit board, laying alongside.

An output transformer occupies the lower section of the mic body. It is enclosed in a metal shield that also forms part of the seven‑pin XLR output‑connector housing (the pins need to carry the power supply to the tube as well as the signal from the mic). The signal output exits the PSU on a conventionally wired, three‑pin XLR. All the metalwork, other than a grey band below the basket, is electro‑plated, and a simple, printed, red SE logo indicates the 'live' side of the microphone. Everything comes in a foam‑lined aluminium case that holds the mic, the included metal‑frame shockmount, the power supply and the seven‑pin XLR cable.

As this is a tube mic, phantom power isn't required, but the mic won't complain if it is connected to an input that has phantom power applied. However, as the XLR has seven pins (rather than the usual three), which are rather thin, you need to take care when mating the connectors: rough handling could bend them.

The quoted 20Hz–20kHz frequency response alone doesn't tell you much about the shape of this mic's frequency curve, although the graph of the capsule's response shows a broad, gentle, high‑end rise, which gives the sound a nice open quality that goes well with the tube's gentle warmth. With a well‑designed tube mic such as this, the influence of the tube is fairly subtle, and it flatters without making the sound seem obviously coloured or unnatural. Conversely, mics that are designed to produce very obvious amounts of tube distortion often end up sounding dull or unfocused — and thankfully SE have not fallen into that trap.

The SE2200T has a sensitivity of ‑33dB (+1dB) where 0dB=1v/Pa at 1kHz, and it is pretty quiet for a tube mic. Its equivalent input noise level (EIN) is specified as 16dB A‑weighted, making it one dB quieter than the solid‑sate version, which is unusual (tube mics tend to be noisier than FET mics, all else being equal). The maximum SPL measured at 0.5 percent THD at 1kHz is 130dB without the pad switched in, which, again, is some 5dB higher than for the SE2200A, and is presumably due to the greater headroom of the tube circuitry.

For general vocal use, the extended high end of this mic helps to produce a detailed sound, but it does so without seeming in any way aggressive; the tube preamp and output transformer succeed in keeping the top end sounding smooth, but not dull. The tube circuitry contributes to a subtle warmth, which yields a robust tone without being obviously coloured‑sounding, and there's that familiar tube‑like sense of compression about the sound, particularly at the lower end of the male vocal range. Overall the effect is gently flattering but still quite natural‑sounding. This mic also works well on acoustic guitar, once you've taken the time to find the sweet spot, balancing the complex string harmonics with the body resonances. If you experiment to find the best mic position, it also works fine on electric guitar amplifiers, delivering a smooth mid‑range with just the right amount of edge but no unwanted grittiness.

In direct comparison with the SE2200A, the SE2200T sounds very similar and, subjectively at least, its sensitivity is almost identical. On voice, the highs come over as slightly smoother sounding and the 'chest' frequencies of male vocals gain weight from that slightly compressed tube character, but the difference, while noticeable, is not excessive. The practical outcome is that vocals seem more solid, and slightly more polished at the high end, but by the same token, the comparison also serves as a reminder as to how well the solid‑state version performs, given how affordable it is.

I'm glad that SE haven't deliberately over‑hyped the tube flavouring, because the result is a very musically satisfying vocal mic that can handle numerous other jobs around the studio. They've also managed to release this mic at a recession‑friendly price, so it's well worth trying if you're looking for a new tube mic.

The SE2200T may now be the cheapest serious tube mic, but there are several alternatives if you up your budget just a little, including Rode's NTK and K2, the Studio Projects TB1 and Audio Technica's AT3060.

The SE2200T is everything you'd expect from a tube version of the SE2200A — with a touch more tonal weight and high‑end polish, to give a classic tube mic sound at a project studio price. Don't expect the mic to sound very different from an SE2200A, though, because the tonal character imparted by the tube and transformer is quite subtle, just as it should be.