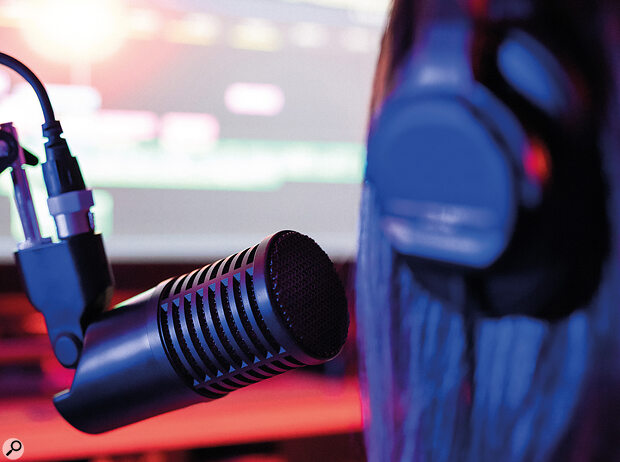 We’ve seen a few active dynamic microphones recently from the likes of Aston and Austrian Audio, and now sE have their own take on the concept with the DynaCaster, which can be used in both passive and active modes. While its name might suggest that the DynaCaster is aimed at the podcasting market, there’s no reason at all not to use it in the studio, as it also works perfectly well on sung vocals, electric guitar amplifiers and other instruments. The gain stage is based on the circuitry used in sE’s Dynamite inline booster, applying 30dB of gain when active. Cheaper mic preamps can struggle with low‑output passive microphones; the active mode here has the advantage of not requiring an ultra‑low‑noise, high‑gain mic preamp to get a good signal out of the mic.

Presented in a chunky, end‑fire format with integral swivel mount, the mic uses sE’s DMC8 cardioid pattern capsule, constructed in the same way as those in the company’s V‑series stage microphones. Based around a neodymium magnet, this incorporates an aluminium voice coil to minimise mass, which in turn helps maintain the transient response of the mic. The DynaCaster’s balanced XLR output has gold‑plated pins and is built into the swivel mount rather than the mic body, so as to present a tidy profile when used on camera. Included with the mic is a thread adaptor and an external windshield, but no storage pouch. If size and weight are of interest, the weight is 732g and the dimensions 62 x 220mm.

Active mode is engaged by applying 48V phantom power and activating a recessed switch on the base of the mic. This area also hosts a pair of EQ switches, which provide a total of six permutations of LF and HF trim for shaping the sound. Broadly speaking, in addition to the ‘flat’ settings, these switches offer cut or boost at the low end and two HF presence boost options peaking at around 8kHz. The LF cut position is useful in countering the proximity effect when using the mic up close.

In terms of the mic’s performance, sE quote a frequency response of 20Hz to 19kHz, but an examination of the frequency plot shows that the points at which the sensitivity drops by ‑3dB are closer to 60Hz and 17kHz — a perfectly respectable bandwidth for a dynamic microphone. Sensitivity is quoted as 2mV/Pa in passive mode and 60mV/Pa in active mode.

Effort has gone into reducing popping by fitting an integral three‑layer internal pop filter that can be unscrewed for cleaning. Internal capsule isolation, based on sE’s own patented system, provides useful defence against stand‑borne vibration, so in most situations there is no need for a separate shockmount cradle. An external pop screen is included with the mic, and will be useful when working outdoors or if the speaker/singer has a voice that produces excessive plosives.

The low cut setting proved useful when working close to the mic, while the three HF settings range from a flat, uncoloured sound to a subtle presence boost that helps add clarity. 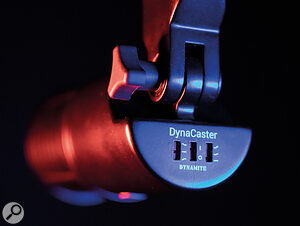 The base of the mic houses switches for engaging active mode, and adjusting the HF and LF response.

Used for spoken word, the mic delivers a solid, clear character that is well‑suited to podcasting, with the EQ switches helping to match the sound of the mic to the user’s voice. The low cut setting proved useful when working close to the mic, while the three HF settings range from a flat, uncoloured sound to a subtle presence boost that helps add clarity. That triple‑layer pop filter also proved to be very effective at alleviating plosives. The active boost works exactly as expected; the Dynamite circuitry provides clean gain with negligible noise and means that your preamp doesn’t have to do the heavy lifting. Active mode is also useful for miking quieter sources like acoustic guitar, with the EQ switches again helping to optimise the sound.

Switching back to passive mode, I tried miking my guitar amp and found that the bass lift/top cut setting gave me a sound close to how I perceived the amp sounding in the room, capturing the necessary low‑end warmth while keeping the highs from sounding too aggressive or gritty when a little overdrive was applied. Passive mode also worked well for hand percussion — an application that active mode would probably have been too sensitive for.

Given its price, the sE DynaCaster turns out to be a strong performer with plenty of applications outside of podcasting.

The DynaCaster is a very capable dynamic microphone, and its active option really helps capture quieter sounds without incurring noise from sub‑optimal mic preamps. The switchable EQ is also a very practical feature, and adds to its versatility.