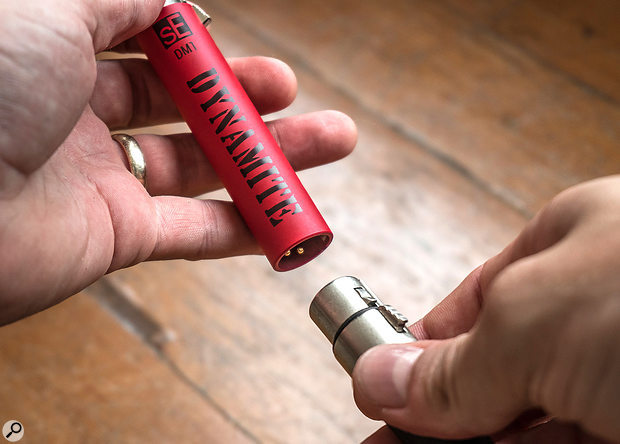 We put sE's claims of truly transparent gain to the test...

The sE Electronics DM1 provides a similar functionality to many other microphone gain boosters, such as the Cloud Microphones Cloudlifter and the Triton Audio FetHead — it acts as a local in-line gain-booster for weak microphone signals, such as from passive ribbon mics and some moving-coil dynamics. It is built into a metal tube just under 100mm in length so is very compact. We were very lucky to get this review underway, actually, as this tube comes packed inside a dummy stick of dynamite, complete with fuse — Paul brought it back from the AES show in his hold luggage, and when back in the UK he found a note to say the bag had been searched by US customs; thankfully they decided his bag wasn't suspicious enough to warrant a controlled explosion!

The DM1 has a male XLR connector at one end of the tube and a female XLR at the other, and this is placed between your microphone and your regular mic preamp. It is powered by the preamp's standard +48V phantom power and draws a modest 3mA. It doesn't pass the phantom power on to the connected microphone, so there's no risk of damage to vintage ribbons or faulty mics. There are no switches or controls, so all you have to do is remember to feed it phantom power and adjust the gain on the mic preamp as usual. In addition to providing useful gain when you need it, the buffered circuity also makes the sE DM1 a practical choice when feeding long cable runs.

Constructed mainly of surface-mount components, the DM1 is designed to add a fixed 28dB of gain, using a very low-noise Class‑A design, and on paper the specifications look very impressive (more on that below), but no distortion figure is quoted. In subjective tests, the DM1 seemed quiet and clean, delivering plenty of gain for low-output passive ribbon mics, but after a few practical tests such as this, we decided that Hugh should introduce the DM1 to his Audio Precision test set, to see just how good it is on a technical level.

On the test bench Hugh measured the DM1's gain at 29dB — which is slightly more than the specified 28dB — and unlike many similar 'cascade' gain devices, the Dynamite's gain remained consistent regardless of the destination's load impedance. The maximum input level is around -18.5dBu, delivering +10.5dBu at the output (with 0.5 percent THD). Hugh's measurements suggest that sE's quoted frequency response of flat (within 0.3dB) from 10Hz to 120kHz is a credible claim — he found that the frequency response was ruler flat from just under 12Hz (with a gentle 6dB/octave roll-off below that) right up to the limit (and beyond) of the test system at 80kHz. The DM1 introduced a very small amount of additional phase shift at the frequency extremes, but only a few degrees, which is insignificant.

Arguably of more importance in a device like this are the noise and distortion figures and, measured in isolation, the DM1's residual noise floor was -94.3dBu (roughly 22dB above the Audio Precision test set's quiescent noise floor, but with 29dB of additional gain in the signal path). That is a very good result! sE quote a self-noise figure of 9μV, according to the Japanese JIS-A standard, but Hugh was unable to replicate that measurement with the AP system. Instead, to test the DM1's performance in more of a real-world situation, he hooked it up to one channel of a GML 8304 mic preamplifier with a test signal level of -59dBu — fairly typical of a low-output microphone working with a quiet sound source. This required 65dB of gain to raise the output signal to a nominal +4dBu in the straight channel. He then matched the gain of the second channel using the DM1, which required just 35dB. Measuring the noise and distortion levels of the two channels showed that the one with the DM1 was almost exactly 6dB quieter, overall, but with fractionally higher distortion (0.012 versus 0.0089 percent). However, most of that extra distortion was due to a higher second harmonic level, which is a very benign result. Overall, then, the DM1 performs extremely well and does exactly what it is supposed to do. In situations with low-output mics and quiet sources, and where the available mic preamp may lack sufficient gain, the DM1 boosts the signal level very efficiently and cleanly, and may well result in a better overall noise performance into the bargain.

There are several active in‑line mic preamps on the market, including those from Cloud Microphones, Triton Audio, BeesNeez and MartiAudio.

We decided that Hugh should introduce the DM1 to his Audio Precision test set, to see just how good it is on a technical level. 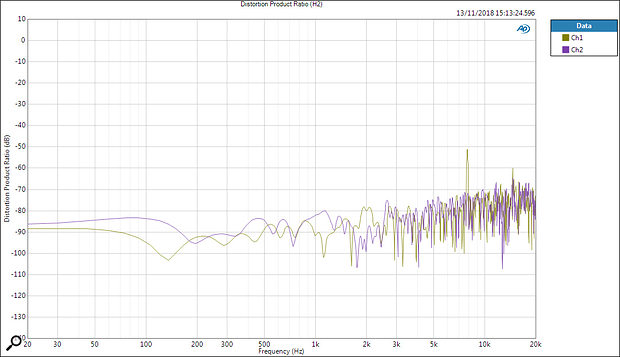 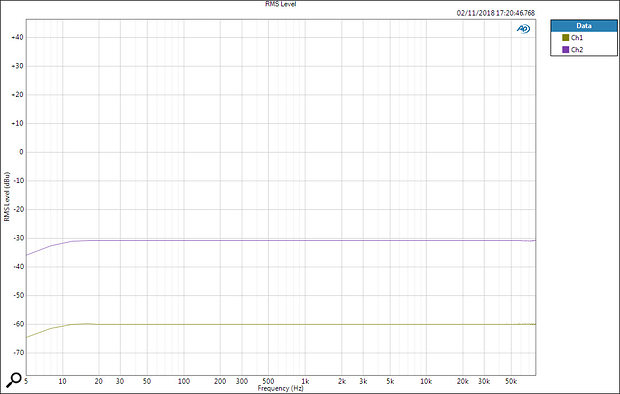 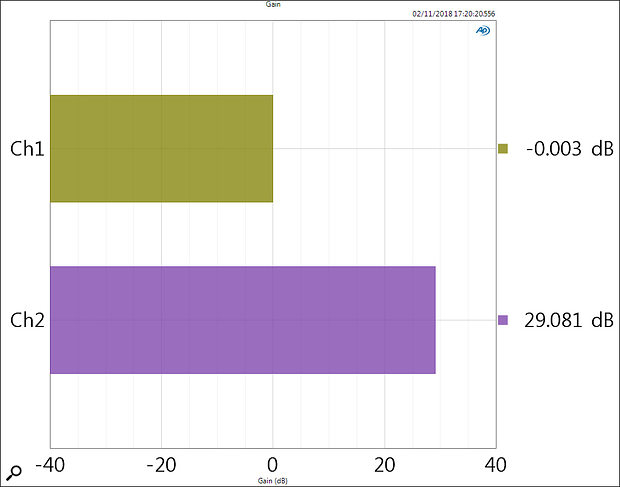 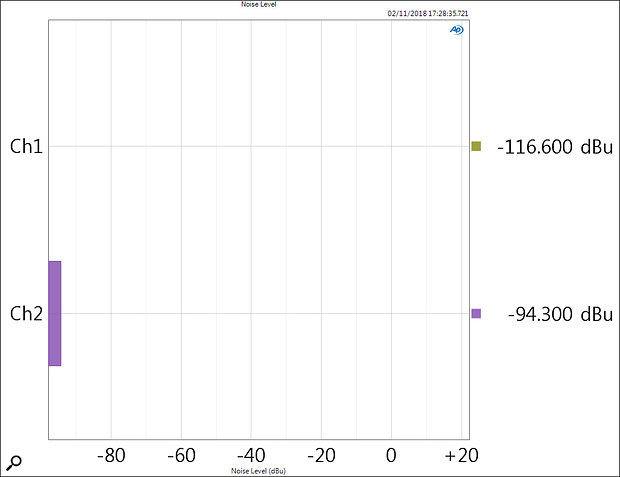 The residual noise floor is impressive — at 94.3dBu, it measured roughly 22dB above the Audio Precision test set's quiescent noise floor, but with 29dB of additional gain in the signal path. 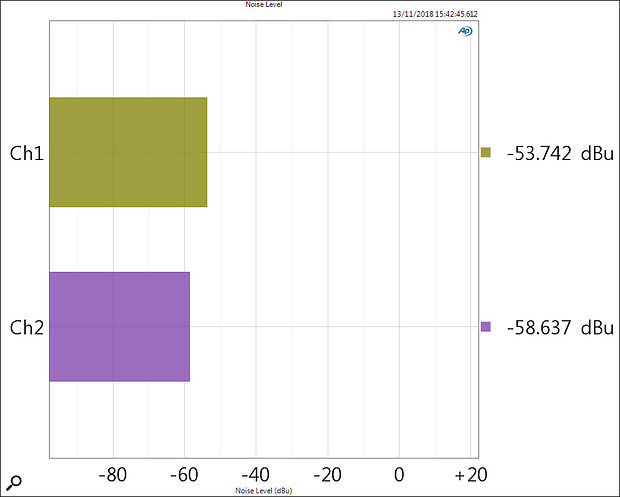 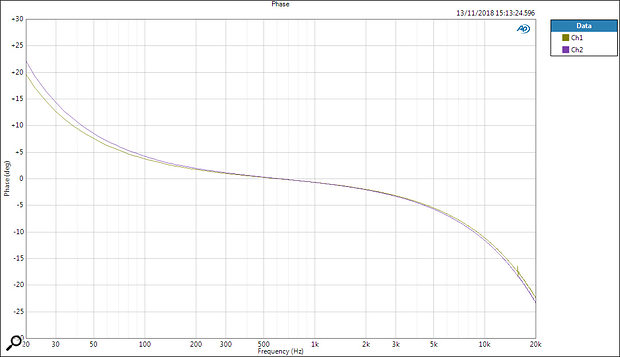 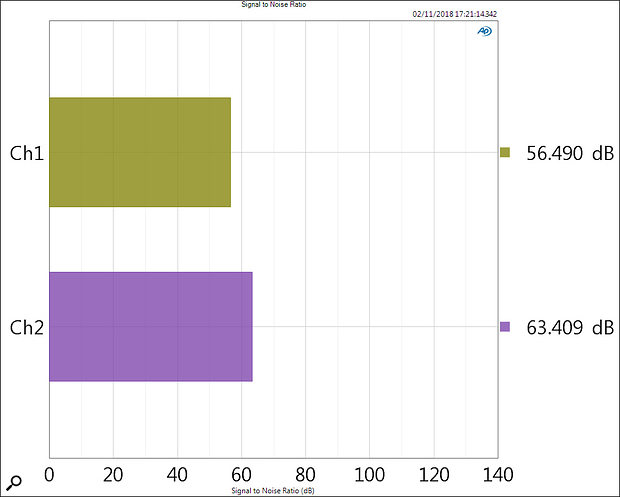 This in‑line mic preamp booster does what it sets out to, and boasts great technical performance.