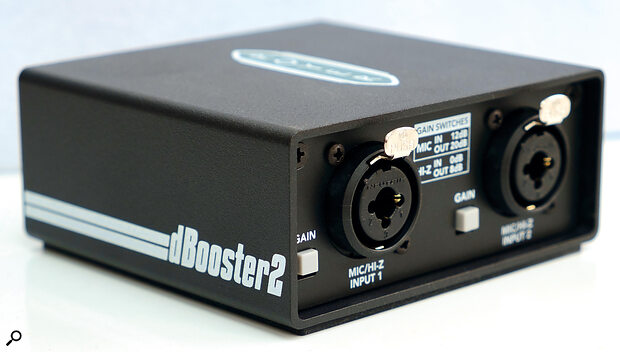 Not content with having created arguably the world’s best preamp booster, Royer’s boffins decided to make it better.

American manufacturers Royer Labs are very well known for their range of high‑quality ribbon microphones, but a few years ago they also introduced the dBooster, an inline microphone gain‑boosting device that was intended for use with ribbon and other low‑output passive microphones. I reviewed the phantom‑powered dBooster in SOS July 2019 (www.soundonsound.com/reviews/royer-labs-dbooster) and found not only that it was the most sophisticated design of its type I had ever come across, but also that it delivered consistently excellent technical performance.

The original dBooster is still available but, being a single‑channel unit, it was almost inevitable that Royer would sooner or later be persuaded to produce a dual‑channel version for the convenience of those using stereo ribbon mics...

Well, here it is: the predictably named dBooster2. As you’d expect, this new version effectively provides two dBoosters within a single extruded aluminium box, and it uses an updated version of the same sophisticated circuitry that has proven so effective and reliable in the original single‑channel model. I described that original version in detail in my previous review, but as a brief recap each channel’s input section comprises four paralleled discrete transistors on each side of the balanced input to form an ultra‑low‑noise input stage, complete with elaborate power‑supply conditioning and a symmetrical balanced output driver based on the OPA1692 high‑performance dual op‑amp. Current feedback is employed to ensure minimal distortion, and construction is on a high‑quality fibreglass PCB using mainly surface‑mount components, but with high‑quality through‑hole Rubycon electrolytic capacitors. 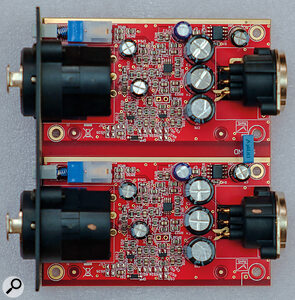 The circuitry uses a combination of surface‑mount devices and high‑quality through‑hole electrolytic capacitors.At 3.6kΩ, the input impedance presents a relatively easy load for ribbon mics, in order to maximise output level and headroom, while buttons on the input end of the box switch the overall gain boost between nominal +12 and +20 dB settings. Each channel draws up to 7.5mA of current from the phantom supply, but there are no LEDs to indicate when the box is adequately powered. Importantly, phantom power isn’t passed through to the input XLR connectors, so delicate ribbon mics are fully protected.

If you simply place two channels in a box there’s always a risk of creating inadvertent ground‑loops — but not in this case! Royer have neatly avoided that possibility by building in DC isolation for channel 2’s connector ground paths, linking them to the unit’s chassis ground only via capacitors. It’s an arrangement which ensures effective RF shielding while preventing low‑frequency ground‑loop currents. In developing the dBooster2, Royer have also tweaked the circuitry slightly to further increase the headroom margins and better align the actual gain with the nominal values, and I discuss this in more detail below.

Now, if two channels and these minor performance upgrades described the new dBooster2 completely it would be a very worthwhile product but, surprisingly, Royer have also taken the opportunity to extend the versatility of this elegant device much further by incorporating instrument input (DI) facilities on both channels, too. So, unlike the original model, the new dBooster2 can serve either as a dual‑channel DI box in recording applications, or as a very high‑quality stereo mic booster — or, of course, it can provide one channel of each at the same time.

The XLR outputs draw phantom power from the main mic preamps in the recording chain.To facilitate this new DI feature, the standard input XLRs have been replaced with ‘combi’ types, with a TS jack socket at the centre of the XLR pins (as seen in the main photo). Plugging a standard instrument cable into the combi‑XLR routes an unbalanced signal through a separate high‑impedance input stage, built around a discrete FET (Field Effect Transistor) to provide the instrument with an input impedance of 270kΩ. This is lower than many active DI boxes (which are typically around 1MΩ), but it’s similar to the ever‑popular Radial J48’s input impedance, so it’s in very good company.

The dBooster2 doesn’t have any ‘link’ sockets which, traditionally, are used to feed backline stage amps, because the dBooster’s end panel simply doesn’t have enough space to incorporate the extra quarter‑inch sockets that this would require. But while this might frustrate in some applications, link sockets are often unnecessary in the intended studio setting, where artist monitoring is now typically direct via the recording system rather than a backline amplifier.

I should also note that this is a DI which is intended primarily for capturing signals from electric guitar and bass pickups or keyboards, etc, and not for piezo‑equipped acoustic instruments, which generally sound much better when they’re fed into a device with a much higher input impedance of around 1MΩ or more.

The addition of instrument input facilities was completely unexpected and, while it is a relatively easy upgrade from an engineering point of view, it adds considerably to the versatility and cost‑effectiveness of this device.

As instruments typically produce higher signal levels than passive microphones, the DI signal path offers less overall gain than the mic path, but the gain switches are still operative, boosting the level by 8dB. Testing the review unit on an Audio Precision system, I found that the low‑gain mode for the instrument input attenuated the signal by around ‑3.3dB, while the high gain boosted it by +5dB.

The FET buffer introduces second and third harmonic distortion progressively as the signal level increases, but it remains very low for normal signal levels, typically below 0.005 percent, only reaching 0.2 percent just before clipping.

There’s plenty of headroom in the circuitry and the low‑gain instrument mode clips at a reassuringly high input level of +13dBu. In the high‑gain mode it clips with ‑6dBu at the input, while the residual noise floor measured ‑96dBu in low gain and ‑87dBu in high gain — both very good figures for this type of device.

Looking at the frequency response, it is ruler flat between ‑3dB points at 8Hz and 22kHz for the DI input, whereas the balanced mic input’s LF response falls to ‑3dB at 6Hz. The HF response remains flat to well over 80kHz.

Running through the bench tests for the microphone booster, it measures pretty much as the previous single‑channel model did, except that the low‑gain mode now provides the intended +12dB (previously this was a little high, at +14.3dB). The high‑gain mode measured a tad over +21dB, while the headroom and clipping levels were both a couple of decibels better than the original mode (‑2 and ‑22 dBu for the low‑ and high‑gain modes, respectively). Total harmonic distortion remained below 0.0005 percent at all practical signal levels, which is excellent.

Fundamentally, then, Royer’s dual‑channel dBooster2 is a very clean and sonically accurate DI box — you shouldn’t expect it to add musical coloration — and it’s obviously very convenient when working with passive stereo ribbon mics in particular. The dBooster2 is a predictable development of the original design, but one which offers the bonus of a slightly enhanced technical performance. The addition of instrument input facilities was completely unexpected and, while it is a relatively easy upgrade from an engineering point of view, it adds considerably to the versatility and cost‑effectiveness of this device.

As we have come to expect, the dBooster2 is also engineered and constructed to very high standards indeed, with a concomitant level of technical performance and flawless sound quality. I can’t recommend the dBooster2 highly enough — gain boosters simply don’t get any better than this!

While there are now various options for passive mic boosters, I’m not aware of any that offer two channels, boast the sophistication and technical specs of the dBoosters, or that can double up as a DI box. Perhaps the closest recording DI box equivalent is Orchid Electronics’ Dual Channel Micro DI, but that can’t also boost passive microphones and doesn’t have the dual gain modes.

A clever development of the original dBooster, adding a second channel along with instrument inputs to serve as a very high‑quality recording DI box when not needed as a passive mic booster.