Inline mic preamps boost the feeble outputs of insensitive ribbon or moving‑coil dynamic mics, and they’ve become relatively common in recent years. Some models, including sE Electronics’ DM1 Dynamite (reviewed in SOS February 2019: www.soundonsound.com/reviews/se-electronics-dm1-dynamite), are surprisingly sophisticated and versatile. The DM1 proved to be a fine performer but a few years on sE have introduced a sibling — the DM2 TNT — which does the same thing but with improved performance and some interesting extra features.

Before looking at the DM2, a quick recap of the DM1 might be helpful. Built into a 19mm (diameter) by 96mm (length) metal tube, the DM1 has an XLR connector at each end and can be plugged directly into most mics. This places the gain stage right next to the capsule, so the signal is boosted at the earliest possible point, reducing the risk of interference or cable noise contaminating the weak mic signal. Though higher, the inline preamp’s output is still at ‘mic level’ and is fed to a standard mic preamp, mixer or interface.

The DM1’s internal electronics operate on standard 48V phantom power, drawing a very modest 3.0mA and providing a fixed 28dB of gain, while adding almost no electronic noise. Naturally, phantom power is not passed to the attached mic so delicate ribbon mics are kept safe.

Devices like the DM1 thus allow very low‑output dynamic mics to be used with preamps, mixers or interfaces of limited overall gain, which otherwise wouldn’t be able to boost the signal adequately. In some cases, as they allow lower gain to be applied by the main preamp or mixer channel, a better overall signal‑to‑noise performance can be achieved. My test bench measurements for the DM1 showed a 6dB improvement in the noise floor compared to the figures obtained without the DM1, for the same overall gain!

Continuing the ‘explosives’ theme, sE Electronics’ new DM2 TNT is painted an attractive royal blue, but it otherwise adheres to the DM1’s size and format, and ships in the same style of cardboard tube complete with fake fuse wire in the cap! However, the preamp technology has been developed to enhance both its technical performance and practical versatility, notably with measurably improved self‑noise. Using the JIS‑A measurement protocol (JIS‑A is a Japanese standards body) the company specifies self‑noise figures of 1µV and 6.6µV for the DM2’s low‑ and high‑gain settings, respectively (see below). For comparison, the DM1 is specified at 9µV, theoretically making the DM2 2.7dB quieter in the high‑gain mode, and 4dB quieter for the low‑gain mode (taking the lower gain boost into account). Although seemingly small numbers, these are actually very worthwhile gains in performance. (They could even be of benefit with phantom‑powered mics too, though you’d need to use an external phantom power supply).

Additionally, the new circuitry bestows the DM2 with slightly more headroom than the DM1, with the specs claiming a maximum output level of +11.8dBu (in high‑gain mode) compared with the DM1’s +10.5dBu (both figures at 0.5% THD). The updated circuitry draws fractionally more phantom current (3.1mA) than its sibling, but the bandwidth remains the same (10Hz‑120kHz at the ‑0.3dB points), as do the impedance of the electronically balanced output (135Ω) and the minimum destination load impedance (1kΩ).

There are two new switchable features, with both switches recessed to prevent damage and inadvertent operation; sE provide a miniature blue‑handled screwdriver to operate them. First, a miniature slide switch selects a boost of either 15 or 30 dB. sE added the new lower gain option because self‑noise is inherently related to gain, and a full 30dB boost won’t always be required. This has the benefit of an even lower noise contribution, so it’s potentially very useful.

The DM2 is more versatile than most inline preamps, offering two gain settings and several switchable input‑impedance options.The other switch is a rotary one which selects one of eight input impedance options: 50Ω, 200Ω, 360Ω, 1.5kΩ, 2.7kΩ, 6.8kΩ, 100kΩ or 10MΩ. The input impedance affects the tonality, bandwidth and output level of dynamic mics quite significantly, and so changing this impedance can be considered a useful way of ‘tuning’ a microphone’s character for different situations. While many conventional preamps do now offer alternative impedance options I can’t think of any with as many settings or which span such a wide impedance range as the DM2; they typically present an impedance in the 1.5 to 2.5 kΩ range, although Rupert Neve often favoured impedances of around 6kΩ in his later designs. Yet, many vintage dynamic mics were designed to work into much lower impedances (50 to 300 Ω impedances were common before the mid‑1970s) and modern ribbon mics are often intended for use with much higher impedances in the 15 to 30 kΩ range. So having this switchable facility in the DM2, with so many options, is very welcome.

That said, there’s rather a large gap between the 6.8 and 100 kΩ settings, and given that I couldn’t hear any difference between the 100kΩ and 10MΩ modes with any of my moving‑coil or ribbon mics I’d personally have preferred to have a potentially much more useful 30kΩ option in place of either the 100kΩ or 10MΩ mode.

Using an Audio Precision set, I ran various tests to check the specifications and capabilities of the DM2. The two gain modes delivered the specified gains at exactly 15 and 30 dB, and the frequency response was ruler‑flat from 20Hz to well over the 80kHz limit of the test set. However, I noticed a gentle peak in the response below 15Hz when using the low‑gain mode, and this could potentially worsen the level of unwanted subsonic noise in some cases (see the AP plot). THD was generally below 0.01% for all normal signal levels, rising to 0.5% with an input level of ‑16dBu which delivered an output of +13.2dBu (in the high‑gain mode), which is slightly more than the published specs. In the low‑gain mode this input voltage and THD level delivered ‑1.1dBu. 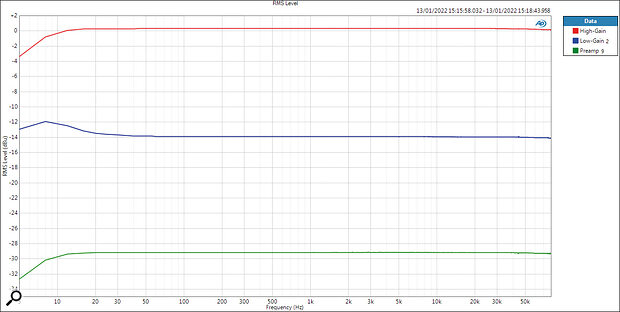 The frequency response is very flat, except for a slight low‑end peak on the low‑gain setting.

To assess the input impedance options I used an NTi Minirator MR‑Pro, which confirmed values precisely matching the switch labelling up to the 6.8kΩ position. As the Minirator can’t measure impedances above 50kΩ, I was unable to confirm the exact impedances of the 100kΩ and 1MΩ settings, though I’m sure they are accurate too.

I used a channel of my Audient ASP880 preamp to test the noise floor of the DM2, since this has continuously adjustable gain (most of my other preamps have switched gains, which makes level matching difficult). The preamp was connected to the AP system, which provided a low mic level signal at ‑55.5dBu, and I adjusted the preamp gain to provide +4dBu at the output. I then replaced the input from the AP with a 150Ω terminator to measure the equivalent input noise (EIN) figure. I repeated this procedure with the DM1 and DM2 connected to the preamp’s input, allowing me to derive comparable EIN figures for both, and also for each of the DM2’s two gain modes.

In practice, the results will partly depend on the self‑noise characteristics of the preamp being used, but my test results were extremely impressive, with the high‑gain mode of the DM2 being over 2dB quieter than the DM1 — which was, itself, nearly 3dB quieter than the preamp on its own, confirming sE Electronics’ claims that the new model delivers a usefully improved performance.

Although seemingly small numbers, these are actually very worthwhile gains in performance.

The DM2 is a worthy and welcome addition to sE Electronics’ ‘explosives’ family and, although slightly more expensive than its stablemate, the improved performance, additional gain options, and selectable impedance facilities easily justify the extra cost.

There are many inline microphone gain boosters, but most have a fixed and relatively high gain (typically 25‑30 dB). However, the Royer dBooster (and dBooster2) has selectable high‑ and low‑gain modes similar to the DM2 TNT. The only other similar device I’m aware of with different input impedance options is Bad Dogs Audio’s new Cargo, which has a continuously variable input impedance from 150Ω to 40kΩ.

Building on the success of the excellent DM1, the DM2 offers enhanced technical performance as well as new selectable gain and input impedance options.