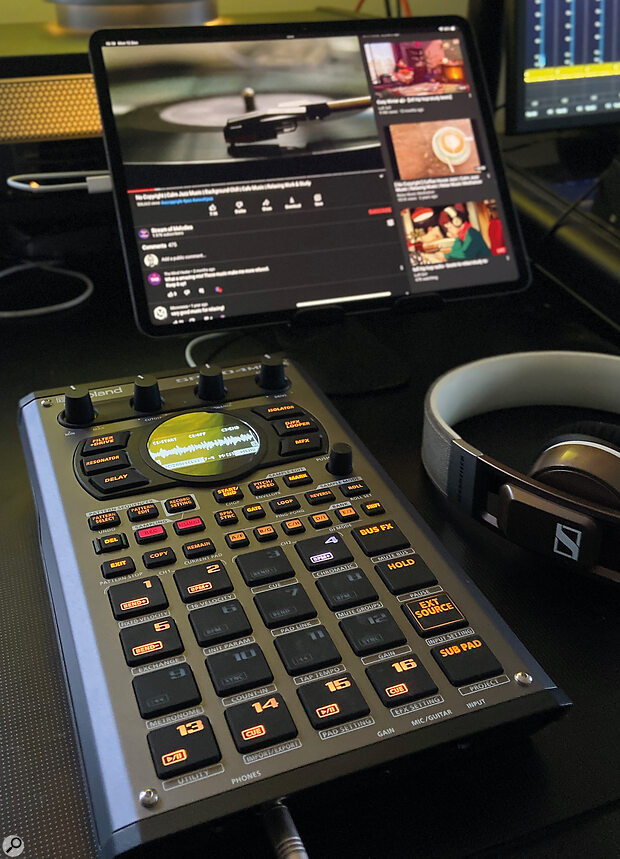 The Boss/Roland SP series of pad‑based samplers has been around for over 20 years, maintaining a loyal fanbase even among those who’ve dallied with MPC, Maschine or Push. The SPs carved a niche for themselves as live performance tools and DJ sidecars, with their simplicity and transition‑friendly effects. The 303 and 404 have also been used as compositional tools by many hip‑hop beatmakers like the great J Dilla.

More recently the SP‑404 has been popular in the mushrooming lo‑fi beats scene, typified by mellow, melancholy chopped jazz samples and loose hip‑hop beats, influenced by SP users like Dilla and Madvillain. Much of this music is home‑grown and shared on YouTube, and the 404 is affordable, portable, and self contained. Perhaps this is why Roland thought this was the perfect time to revitalise the 404 with a significantly enhanced MkII model.

The basic form factor and workflow of the SPs has stayed remarkably consistent over the years, so veteran users should have no trouble finding their way around this one. But several modern conveniences have been added, along with a host of feature additions and improvements. The most visible hardware change is the move from 12 to 16 pads. This brings the 404 into line with most comparable devices, and provides more sample/pattern storage slots.

Also immediately obvious is the new display. The previous models had a chunky but basic three‑character screen. The MkII gets a proper graphical interface, which makes the machine much more accessible, with niceties like waveform editing, multi‑effects grid display, and a file browser.

Missing from the front panel is the mic grille seen on all earlier 404s, as the built‑in mic is gone. There’s still a dynamic mic input, which is now switchable to guitar DI mode. Removing the mic seems counter to the embracing of DIY lo‑fi production, but this is perhaps made up for by the fact that you can sample directly from class‑compliant USB devices like a tablet or laptop (but sadly not my Lightning‑connected iPhone).

The USB in question is of the bang‑up‑to‑date type‑C variety, and provides both connectivity and power. Yes, the SP‑404 does still have a battery bay, but I’d consider this primarily a live backup, as six AAs will only get you around three hours of use. USB is a much better option. The only issue I had was that it requires a direct USB‑C to USB‑C cable, and won’t work with a regular USB‑A charger outlet. A good old fashioned DC power adaptor is also included.

While we’re talking connectivity, the MkII now has proper grown‑up audio connectors for its line ins and outs, instead of phono. You may or may not be pleased to learn that MIDI is on mini‑jack instead of DIN. A clear upgrade, though, is the inclusion of a MIDI out — the MkII can now sequence external devices where the earlier models could not.

Before we get too hung up on what’s new, let’s recap what the SP‑404 does. First and foremost, it’s a sampler aimed at performance and sample‑based beatmaking. In that respect it has more in common with instruments like the Elektron Digitakt and Novation Circuit Rhythm than the MPC or Maschine+. Its other specialism is effects. It’s set up for fast access and control of multiple effects for live mangling of the internal samples or live inputs. The MkII now has four effects buses; more on that in a bit.

An SP project holds one sample per pad, across 10 banks, so the extra pads increase the number of samples per project to 160 from 120. But that’s not all, because the MkII can now hold 10 projects in memory instead of one, and it only takes a couple of seconds to load a new project. Projects and samples can also be backed up, imported and swapped out to and from an SD card, plus there’s an excellent software manager.

You can record patterns on the SP‑404, which are again stored one per pad across your banks. A single pattern at a time can be triggered for looped playback, over which you can continue to trigger samples live. Patterns can be chained to create a song structure....