For those with respectable but not stellar microphone preamplifiers in either recorders, interfaces or mixers, high-gain settings, such as those often required for passive moving-coil or ribbon dynamic mics, can result in hiss and a definite increase in the noise floor. A simple solution is to use a ‘cascade’ preamplifier, in-line between the mic and the mic preamp. Powered by the receiving device’s phantom power supply, these ‘pre-preamps’ will give you various amounts of additional gain depending on the make and model, meaning that you can use lower gain settings on the microphone input of the device itself. 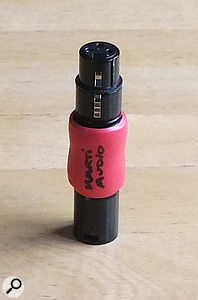 The best-known models are Cloud Microphones’ Cloudlifter and Triton Audio’s FetHead, but a small UK-based micro-business, MartiAudio, have recently been attracting interest for theirs. The microphone preamps in my various devices are respectable enough, but all exhibit some noise artifacts when cranked up for dynamic mics. To give some context, I usually record single-voice material in a conversational style in a treated room. This, coupled with me being somewhat softly spoken, means that I need all the gain I can get! So I decided to buy a MartiAudio cascade preamp. It was delivered within 48 hours of placing the order, although as they’re often made to order you may sometimes have to wait longer, as is made quite clear on the company’s eBay site — at the time of writing, that was the only way of purchasing one.

The MartiAudio preamp couldn’t be simpler. It’s effectively a short barrel (8.5cm) with an XLR socket on one end and a corresponding plug on the other. You connect it between the mic and the existing preamp. It puts me in mind of the XLR ‘gender-changers’, attenuators and polarity inverters that can be found in many an audio tech’s box of bits. It requires 48V phantom power (MartiAudio state that the device may work with lower phantom voltages, but this is not guaranteed). Unlike the cascade preamps from some other manufacturers there’s no option for phantom-power ‘pass through’, so it’s strictly for use with mics that need no external DC voltage —you’ll need to remove it if you want to hook a phantom-powered mic up to your main preamp. But that’s a minor restriction, and the price is much less than the ‘pass through’ equivalents from other companies!

To test the MartiAudio device, I used my Zoom H5 digital recorder and a Beyerdynamic M201 hypercardioid moving-coil dynamic microphone — I’ve prepared a few audio examples of my tests so you can judge the results for yourself (http://sosm.ag/sep16media).

The M201 gives a very smooth, unhyped sound, but asks the Zoom H5’s preamp to work very hard to get an acceptable level — at which point noise can then become a slight but irritating issue. It took me all of 30 seconds to connect the preamp between the microphone and the mic input on the Zoom, and another few seconds to adjust the gain. To my ears there was a distinct improvement — the noise was reduced and there were no additional unacceptable artifacts.

However, I could detect some artifacts when listen more critically to the recordings. The preamp introduces some slight hiss (if you listen to the audio examples, compare it with the benchmark LDC which has a very low self-noise figure), but I had to listen on headphones at relatively high volume to become aware of it. Also, compared to the ‘native’ recording of the M201 I felt that there was a little boost in the low mids, something another reviewer has characterised as ‘warmth’.

But those are observations rather than criticisms, and when it comes to criticisms, I have only one — I was surprised to discover that the device inverted the polarity of the signal. When I asked the manufacturer about this he confirmed that all units do this. It’s a small design flaw, then, but thankfully one that doesn’t affect the audio quality; it’s a trivial enough matter to reverse the polarity to its original state.

The bottom line is that this cascade preamp will allow me to use some of my preferred dynamic microphones for spoken word, without having to resort to noise reduction in post-processing or investing in dedicated, expensive, high-gain, low-noise preamps. And at the asking price I consider it a real bargain. MartiAudio also make a deluxe version for a slightly higher asking price: it’s electronically identical, but uses Neutrik connectors.

£40 each including VAT and delivery.

There are three recordings in the attached sample file: The first is a benchmark using a low self-noise large-diaphragm condenser mic set to a hypercardioid pattern. The second is the M201 straight into the Zoom. The third is with the MartiAudio preamp in-line. In all cases a high-pass filter at 80Hz was set on the Zoom H5.

The input gain, for all recordings, was set to average at around -12dB with peaks no more than -6dB, the aim being to get as much gain-matching as possible at the front-end rather than later in the DAW. That said, all recordings have been normalised to -2dBFS to give some consistency. No other EQ, processing or effects have been applied.