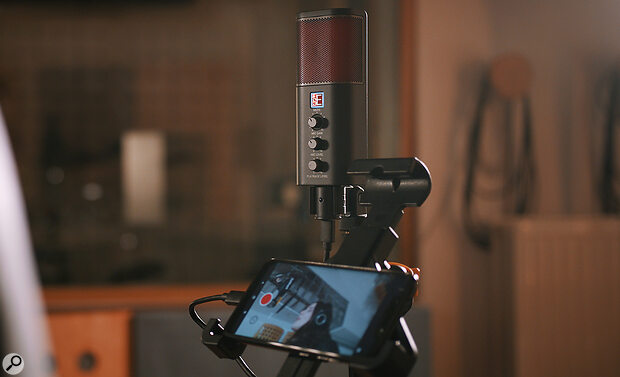 In their early days, USB microphones were often considered just a bit too ‘consumer’ to be taken seriously, but in recent years they’ve become more sophisticated, with performance that rivals that of traditional studio microphones. The Neom USB reviewed here is a case in point: based on sE’s existing back‑electret capacitor microphone technology, and employing a 16mm capsule similar to that used in their X1A studio mic, the Neom USB is a cardioid microphone in a compact housing with all the necessary controls located on the front where they are easy to operate.

A neat metal desk stand with rubber feet is included, and the mic is compatible with both Mac and Windows computers. It can also be used with Apple mobile devices via a Lightning connector, though optional converter cables are needed. Included with the mic and stand are a USB‑A to USB‑C cable, a thread adaptor, and a mic clip that can be detached from the base so that the mic can also be mounted on a standard studio mic stand if required. A USB‑C connection port is located where you’d normally expect to find an XLR connector, and as the circuit draws its power from the USB connection, no additional power supply is required. A 3.5mm TRS jack on the rear of the mic is used for connecting headphones.

The Mic Gain knob has a coloured LED ring around the control, which acts as a simple level meter, turning from green to red if the gain is set too high. Pressing the sE logo mutes the mic, whereupon its backlight changes from white to red. Recording at up to 192kHz/24‑bit is supported, and no drivers are needed on macOS as the mic is class compliant. Monitoring is built in, with separate rotary controls for Mic Level and Playback Level making it easy to balance the monitor mix in the headphones with zero latency (you’ll need to remember to disable software monitoring on the DAW mic track to avoid echoes). My tests were done using a 2014 MacBook Pro running Logic Pro X.

Tailored for vocal use, the mic has a response that is 3dB down at roughly 50Hz and 18kHz. The response shows a modest bass lift centred at 100Hz, is nominally flat from around 250Hz to 4kHz, and there’s a presence lift of around 5dB peaking at 12kHz. Keeping the boost above the 5kHz region like this means the highs sound airy and open without most voices taking on an aggressive character, and in practice, the mic delivers a very natural and detailed vocal sound without introducing harshness. There’s also enough mic gain to allow quieter speakers to achieve a healthy recording level, and though no noise figures are quoted, I encountered no significant noise issues when using the mic for its intended close‑up applications.

While well‑suited to podcasting and, because of its stylish looks, also to video presentations, sE’s Neom USB also works well for general music recording purposes — not just vocals but also acoustic guitars, hand percussion and so on. If you intend to use it with a specific voice, then I’d urge you to try as many different models as possible to see if one suits your voice better than the others, but for general purpose use where a clean, articulate character is required, the Neom does a fine job.

A versatile microphone that can serve many uses in the studio.