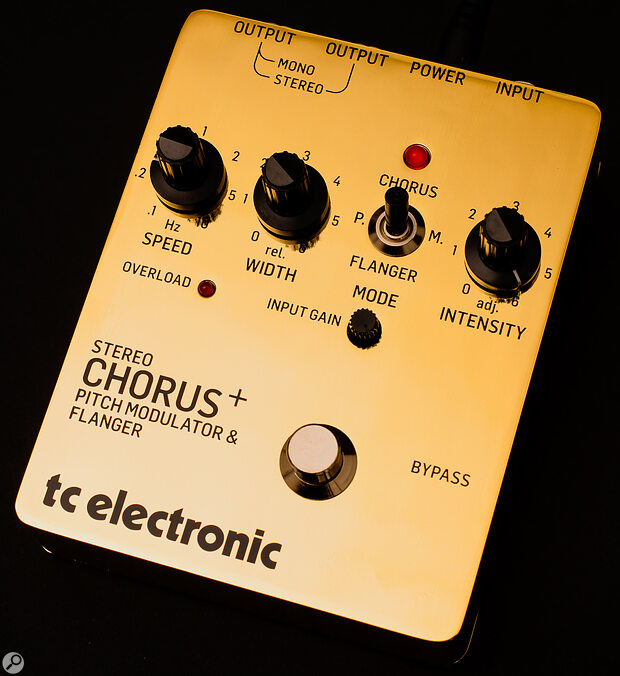 TC Electronic’s first chorus device dates back to 1976 and it is now reborn in the form of their SCF Gold. This all-analogue pedal is based around BBD (Bucket Brigade Delay) chips and is capable of producing chorus, flange, or vibrato — which is logical enough, given that all three effects rely on a modulated delay line.

Only slightly wider than a typical pedal, presumably so as to accommodate the stereo out jacks (the input is mono only), the casework is cast metal, and the connectors are placed at the top end to conserve pedalboard space. Its control layer is both simple and familiar, with plenty of space between the controls and the bypass switch. Note that a 9V, 150mA power supply is required; there’s no battery option.

A speed knob provides LFO rates of around one tenth of a second to 10 seconds per cycle, while width sets the extent of the pitch modulation. The red status LED pulses at the LFO rate when the pedal is active. Intensity operates as a wet/dry blend when Chorus is selected but flip the three‑position toggle switch to Flanger and it works as a feedback control to add more ‘whoosh’. With the Mode switch set to its middle position, the dry signal is removed, leaving a vibrato effect, but you can use the Intensity knob to bring it back in to create blends that sit somewhere between vibrato and chorus.

Less usual for a pedal of this type is the input gain control, which is located below the mode switch. Modulation effects can sometimes make the signal appear to drop slightly in level, so this control can be used to compensate for that — or, of course, to add extra level where specific parts need it.

The character of the effects is very clear, almost hi‑fi sounding.

The character of the effects is very clear, almost hi‑fi sounding. There’s a lot of creative scope, from a slow doubling type of effect via an Andy Summers guitar sound right up to a fake rotary speaker set on fast. Vibrato can also be a useful effect when used in moderation and can work on just about anything from keyboard pads, electric piano to guitar. Flanger mode reminded me of a cleaned-up version of an early EHX Electric Mistress, and it’s capable of some lovely slow, trippy extremes. If you have the option to use the stereo outputs, either via two amplifiers or two input channels when recording, then you’ll hear a useful widening of the sound without anything too extreme going on.

I didn’t notice any excessive background noise, which isn’t something that could be said of early BBD devices, but in other respects the BBD character remains charmingly intact. Given that you are unlikely to need chorus and flanging at the same time, combining them both in one pedal makes a lot of sense and this one does the job in style, at a realistic price.