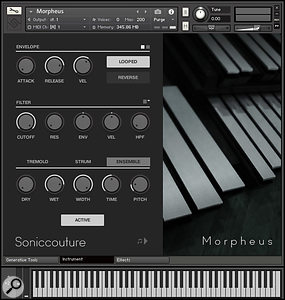 I've long enjoyed UK company Soniccouture's eclectic tuned percussion, in particular Glass Works and the excellent Balinese Gamelan. If such colourful sounds float your boat, I recommend you check out Morpheus. Named after the dream-dealing deity of Greco-Roman mythology, the instrument is the creation of Richard Cooke of US company Freenotes, who manufacture easy-to-play musical instruments in a bewildering variety of shapes, sizes and names.

The featured model is a large metallophone with aluminium bars mounted over black resonator tubes, consisting of two and a half chromatic octaves and a 'bass wing extension', which adds a low octave. Soniccouture sampled it at three velocity levels with three to four round robins, and looped some samples for use in pad sounds. As the name suggests, its pure, sustaining chime has a somewhat dreamy atmosphere, with a tone not unlike that of a vibraphone or Balinese gangsa.

Morpheus (which runs on the free Kontakt Player) is presented as a single patch containing a collection of preset 'snapshots' divided into percussive and sound–design categories. Though small in size, its range of sounds is large, ambitious and exploratory, spanning tuned perc, exotic pads and atmospheric soundscape textures. Ethereal sounds abound: I particularly enjoyed the dreamy chimes of presets such as 'Distant Percussion' and the impressively psychedelic 'Zipline' — with big, floaty, reverberant sonorities like these, a few notes go a long way. Coming back down to earth, 'Wooden Metal Percussion' is a good source of propulsive, gamelan-like ostinato rhythm patterns

Highlights of the sound–design department (and there are many) include 'Metal Bamboo' (which sounds like intercepted alien radio signals), the BBC Radiophonic Workshop-esque 'No Morph', 'Enclosed Wind' (a soft, nostalgic 1960s-style backwards texture with no gastric implications) and the original and intriguing 'Unfiltered Timb', whose sharp, tappy attack gives way to a hypnotically ambient background drone. Amidst all this other-worldly experimentation, the 'Pad Phaser' and 'Dream Drone' pads are downright beautiful.

Much as I enjoy playing these imaginative presets, Morpheus' greatest source of pleasure for me is the Jammer arpeggiator, which generates user-configurable, tempo-sync'ed patterns in a variety of styles, ranges and user-configurable scales. Some of my favourites are the lovely, twinkling, celestial high-pitched arpeggios of 'Jammer Kyoto Gion', while 'Sonic Uncontrol Sequence' and 'Bright Birthday Sequence' generate mad atonal patterns based on a set of interesting scales the makers attribute to Messiaen.

Also included are the Calder and Chord Mutation generative features. Inspired by mobile sculptures, the former allows played notes to drift around in time, while the latter takes a single played chord and generates random arpeggios which go on forever. I like the sound of that — next time someone calls wanting ambient music for an art installation, I'll dial up Chord Mutation, play a C major triad, hit record and go off to the pub. Job done.