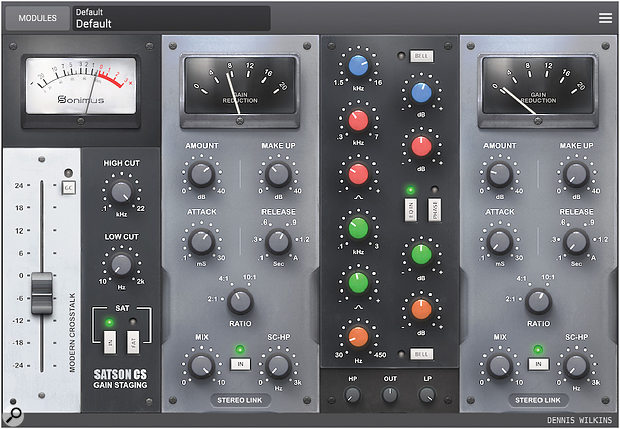 Sonimus, producers of some fine EQ, console and compressor emulations, have introduced a new modular channel strip plug-in with a virtual rack that can hold up to eight Satson Series modules. Only three modules are available in the initial release — a 'preamp' gain stage, a compressor and an EQ — but the rack can host more than one of each, in any order. It's available in all the major native formats on Mac OS and Windows (Audio Units, VST 2.4, VST 3, AAX 32– and 64–bit, for Mac OS 10.7 or newer and Windows 7 or newer).

The input 'preamp' includes a gain fader with a switch to compensate for the boost so that this simply applies increasing amounts of drive, plus 6dB/octave high- and low-cut filters with adjustable corner frequencies (22kHz down to 100Hz for the high cut and 10Hz up to 2kHz for the low cut). Two buttons control the saturation characteristics: In enables saturation and Fat increases the effect very notably. When saturation is off, the gain stage is very clean. A wide range of saturation effects is available, from subtle warming to very crunchy.

The other preamp module feature is crosstalk, which is available in Vintage or Modern modes, with the former introducing higher levels of leakage. This doesn't simulate crosstalk between different instances of the plug-in, but will feed a filtered trace of the left channel's signal into the right channel and vice versa.

The compressor module is a 'colourful' one, adding harmonics as the gain reduction is increased. However, it's significantly different from Sonimus' TuCo compressor, which I reviewed in SOS October 2017. While TuCo is based on a variable-mu tube circuit and has somewhat 'qualitative' controls, the new compressor has calibrated gain, attack and release settings, as well as three fixed ratios of 2:1, 4:1 and 10:1. There is a side-chain filter that goes up to 3kHz, enabling the detection circuit to ignore not only kick drum and bass, but even ignore a vocal if you wish, and respond to only high frequencies such as cymbals. And you can select from three side-chain detection modes: Stereo Link, Dual Mono and Mono. Like TuCo, however, it does not have an external side-chain input.

The compressor module is a 'colourful' one, adding harmonics as the gain reduction is increased.

The EQ module is similar to Sonimus' StonEQ 4k, which is a very fine emulation of an SSL-like equaliser. Unlike StonEQ 4k, there's no Drive control, but considering the saturation/distortion available in the previous two modules I see no reason to add more! The four EQ bands have ±15dB gain with variable-Q bell curves, and the low and high bands can also be switched to shelving mode. There are also low- and high-pass filters with 12dB/octave slopes, steeper than the gain stage module. The low-pass filter can operate down to 2kHz, and the high-pass up to 1kHz. This EQ has a smoothness that enables high-frequency boosts to be introduced without adding harshness.

Tested in Reaper and Studio One, Satson sounded excellent and used little CPU resource. Oversampling at up to 16x is available and can help eliminate aliasing at moderate to high levels of distortion — I found that the 4x oversampling mode reduced aliasing to insignificance at any saturation level, at the cost of a small increase in CPU load. Oversampling also introduces between 31 and 42 samples' worth of latency, depending on the degree of oversampling, but Satson introduces no latency otherwise. Overall, this is another excellent product from Sonimus.