I'm not sure how many Panda synthesizers Eko sold back in the 1970s, but I don't recall ever coming across one in all the studios I've been to. Nevertheless, Soundiron managed to get hold of a 61-key example and sampled its seven core voices as both staccatos and 'infinite' sustains, resulting in a 1.19GB library of stereo samples. In this case the samples are unlocked, meaning that they can be imported as WAVs into any DAW, but Kontakt users will almost certainly want to take advantage of the interface Soundiron have developed for the sampler platform. 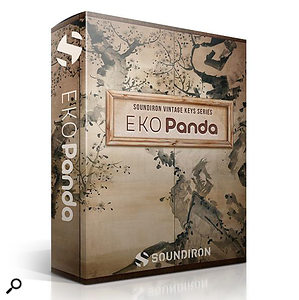 When an instance of Panda is opened in Kontakt, the user is faced with a row of controls for adjusting things like note volume, attack, release, offset, vibrato and octave accompaniment, along with a slider that alters the note-to-note glide time. Preset selection is handled by a drop-down menu that offers a rather poorly named bunch of sounds. Admittedly E Piano and Harpsichord are informative names, but Sustains 1 to 5 and Staccatos 1 to 7 are not so revealing! Adjectives like fat, coarse and smooth would have been enough, given that most of the presets are variations on the same basic tone. Helpfully, though, the sounds can also be selected in a more performance–friendly way, by using keyswitches.

At first this appears to be all the adjustment that is available, but clicking on a kind of virtual picture frame in the interface opens a control panel comprising LFO, filter and arpeggiator sections.The LFO has five waveforms, which can be assigned to modulate parameters such as volume, bass, treble, pitch, pan, resonance and frequency. It's also possible to tweak the LFO speed, intensity and fade-in time. The filter section offers a similar level of control by providing various filter types and parameter targets, as well as dials for adjusting resonance and frequency. Careful programming of the filter and LFO can produce some pretty wild results, and then there's still the option of introducing a degree of rhythmic movement using the arpeggiator.

Users also benefit from Soundiron's standard 10-slot FX Rack, which can be loaded with any of their 14 processor modules, plus there is an alternative interface full of ready-made ambiences (unimaginatively named 01 to 40) that can be used as a starting point for sound–design work.

In terms of limitations, I couldn't detect any round robin variations and there are perhaps too few velocity layers, but that is the nature of the beast, to some extent.

Playing the Panda's presets made me think of the heavy synth scores of the Jon Pertwee-era Doctor Who episodes, but also a little of the rather nice Casiotone Keyboard sounds many of us grew up with. In short, Panda convincingly reproduces the kind of chunky, textured tone that synthesizers from the early 1970s frequently offered. Quirky electro bands and game score designers should definitely check it out.