Large and complex orchestral libraries have their place, but most of the time all that many of us need is a simple-to-use product that won’t fill our hard drives with samples that may never see action. As the word micro suggests, this library is relatively small, taking up no more than 2.5GB of memory with its 2950 samples. Its price is reassuringly low too, meaning that those who only need the occasional burst of strings can justify the purchase. 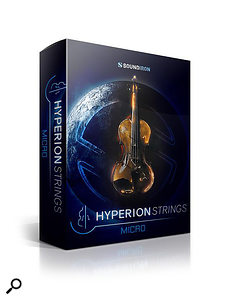 The orchestra features eight violins, six violas, five cellos and four double basses, all of which were close-miked on a dry soundstage at Berkeley’s Fantasy Studios, with the understanding that ambience would be added later using Kontakt’s convolution reverb.

Each of the four instrument sections has been given a dedicated Kontakt interface, although all four are also playable from within a single ‘Ensemble’ interface. Either way, the interface tools are the same, apart from a panel in Ensemble where each section can be turned on and off and have its level and pan position altered.

All of the interfaces have an Effects page offering a filter, compressor and EQ; a page called Space where a convolution reverb can be edited using a set of controls that include an X/Y pad for positioning the instruments within the virtual space; plus there is a page called Arpeggio offering a well-equipped arpeggiator. The only page that might not be familiar to seasoned virtual instrument users is one called Play Assist, which provides various ways to define a scale.

Most of the time, though, a user is likely to be working from the Main page, which features a panel of 12 preset articulation slots. Here, the user is able to browse a menu and assign articulations of their choice to one of the slots, and then select them using either keyswitches or a mouse.

Further to this, there are a set of editing options for each articulation, which vary accordingly. Originally, the instruments were recorded with multi-dynamic sustains, both with and without natural vibrato. Performances also featured staccatos, spiccatos and pizzicatos, together with long crescendos and decrescendos, so the presets and their editing options provide ways to access and apply the articulations.

No matter which page is being viewed, however, global controls governing the presence (Body), attack, offset, swell, release time, release volume and vibrato are accessible at the top of the interface.

Soundiron describe the library as having a forward and robust sound, to which I’d add that it is full and punchy, to the extent that this characteristic survives even when attack is set to slow and Body is used to thin things out. Clearly the aim is to give the strings a very modern sound, and I can imagine Strings Micro finding uses in pop and rock productions as well as film scores and game soundtracks. If you want no-nonsense strings at a fair price, give it a try.