Steady State Fate (SSF) are an American outfit who already manufacture a rounded catalogue of oscillators, filters and envelopes. More recently they’ve begun to diversify into modules that are aimed at producing specific types of sound using an accretion of discrete functions in a single unit. First out in their Entity range was a Bass Drum Synthesizer (BDS) and second is the Percussion Synthesizer (PS), which I have today here on the bench. The PS is capable of producing a huge range of percussive effects including, but not limited to: snares, claps, toms, rim shots, hats, synth percussions, zaps and blips, bass and lead sounds and even new flavours of kick-drum sounds using high-quality, 100-percent analogue circuitry. 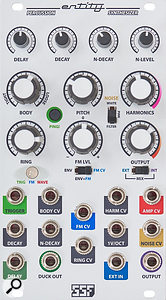 Size: 14HP. Current: +12V = 61mA, -12V = 72mA.Andrew Morelli, the man behind SSF, grew up listening to and making electronic music in the era when digital synths and DAWs were the go-to tools, but found himself increasingly dissatisfied with the results. This convinced him that analogue modular synthesis was the direction for him. Having dabbled with making and modifying various synth kit projects, he followed on with a degree in electrical engineering at SUNY, where he then settled in Hudson Valley, New York State. His first results were designs for Promodular’s Cloq and MIIIX, leading to an initial set of esoteric CV source modules for his own company SSF.

And so to the Entity: The 14HP panel sports 10 knobs (four small and six big), three slide switches, 14 sockets, a ‘ping’ button and an LED indicator. The sound generation consists of a resonant band-pass filter, a wavefolder and a simple envelope. Alongside this is a noise generator (pink or white) with a single decay and level control which can handle hi-hat duties, or add noise elements to, say, the snare sound. A neat trick is that you can trigger the noise independently of the main percussion voice using the external noise CV in socket. There is, however, no separate out for this, which I think is a missed trick.

The six main controls are labelled in terms of physical drum parameters — body, pitch, ring, harmonics and the like — rather than technical synth terminology, which would have ring as resonance, harmonics as wavefold, pitch as cutoff frequency, and body as an envelope/filter slope amalgam to generate ‘tight’ or ‘loose’ characteristics. The envelope can be applied as FM to allow pitch falls/rises, and the main out can be driven into hard clipping if required. Every knob has a CV in socket — which is good — and when using external control the knobs usually act as offsets. There’s also an external in socket which either allows you to add more complex trigger inputs (very sensitive to pulse-width) or can be used for feeding external audio into the main filter. A small sliding switch gives you options of how you choose to combine this, or not. Lastly, there is a ‘duck out’ socket, which is supposed to provide an offset and inverted version of the main envelope for ducking external VCAs. The panel has a manual ‘ping’ button which is helpful when setting up sounds, and there is a tri-coloured LED which shows simultaneously the trigger status in green, the FM in blue and the output waveform in red — very psychedelic!

In use, the module couldn’t be simpler. Just hook up an input to the trigger socket and your audio to the output and away you go. Straight away the module will make some sort of percussion sound, and it is up to you to tweak away to make a sound you like. All the knobs have some sort of effect, though I might add that some people may wish their ranges were larger for slightly stranger explorations — that said, external CV control often yielded these results. Some of the controls interact with each other, and more fun was to be had with CV control of ring, body and harmonics. In fact, with so many options, it was tempting to see what sort of sonic mayhem was possible if you CV’ed everything at once!

I really like the way SSF have deliberately steered you away from traditional methods of making synth percussion — usually using upwards of half a dozen discrete modules per sound and loads of patch cords — although I have to say the PS will not quite do everything you might wring out of a noise/VCF/ADSR setup. I did spend quite some time trying to come up with some classic Simmonds sounds, and though close, I found it hard to replicate the sheer ooomph and sensitivities to velocity of the old classics. There are also some CR78/MiniPops sounds that it doesn’t quite have the facilities for. All those external CVs help, allowing complex modulations to be constructed ‘offline’, only to be tripped up by the fact that the PS controls to some extent mask their real functions!

If you insist on generating all your percussion voices from your modular, then SSF’s Entity modules will help you free up a lot of your real-estate for other tasks. There are other ways to do it using sample-players — the Tip-Top modules and Erica Pico units are neat and simple — but all that PS CV control appeals if you want organic evolutions. I was torn as to whether giving the knobs ‘physical’ labels rather than their technical ones was helpful, and the jury is still out — each approach seems valid. I will say that I have issues with the panel logistics; I found the ping button and slide switches difficult to get to, despite having fairly slim fingers, and wondered if they were in the most sensible locations. The CV sockets have nice coloured labels, but these aren’t reflected at their destinations — surely a trick missed there, as is the lack of a split-off out for the noise synth (there’s even room if you re-jig the sockets...).

In an increasingly crowded Eurorack market (and that can only be a good thing), launching products with a real unique selling point must be hard. SSF are to be applauded for their Entity modules, which offer genuinely novel and useful function-rich sound sources in a neat and attractive format.