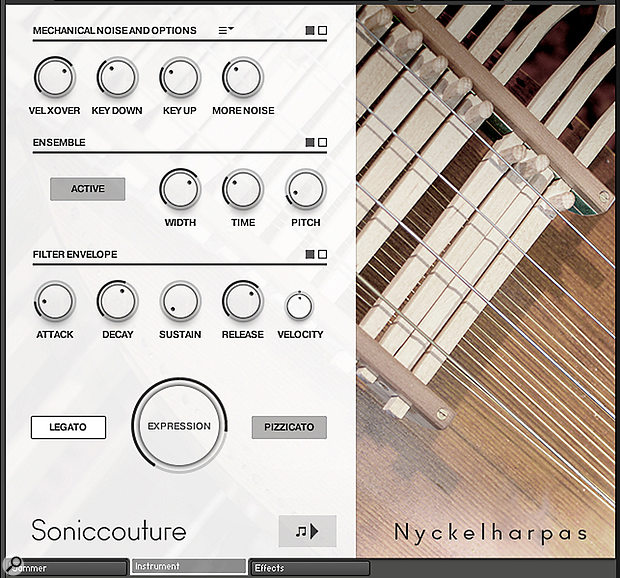 Never heard of the Nyckelharpa? No, neither had I. Translated as 'keyed fiddle' from Swedish, the instrument dates back to the 15th Century, possibly earlier. Resembling a cross between an elongated viola and a hurdy‑gurdy, the Nyckelharpa is a four-stringed instrument played with a bow. Instead of placing fingers on the fingerboard to determine the strings' pitch, it has a key-box mechanism mounted along the neck. Like the hurdy‑gurdy, pressing a key frets the string, except the Nyckelharpa's key mechanism is a considerably more elaborate construction, comprising three courses of keys operating on the upper three strings. The lowest string has none, and only plays a drone C.

Soniccouture have recreated two such Nyckelharpas — viola and cello versions, identical except that the cello version is pitched one octave lower. Both instruments' lowest strings also have 'virtual keys', so are not restricted to playing drone Cs. Later versions of the Nyckelharpa also had 12 sympathetic resonating strings (as do these recreations), no doubt inspired by the viola d'amore, popular in the late 17th Century. The Nyckelharpa is typically played horizontally with the body tucked under the right arm, the whole thing being supported by a shoulder strap.

Soniccouture have, naturally, bestowed these Nyckelharpas with superpowers suited to the 21st Century. There's control over the level of close and room mics, key off, up and down noises, sympathetic string volume, and even additional player noises. An Ensemble 'doubling' mode offers detuning and timing variation between the two voices, and a width control to spread them across the stereo field. Other playback choices include an option to turn off the round robins; the playable range can be extended well beyond that of the original instrument, and the bowed sounds can be disengaged leaving only the key noises — strange, but there if you need it. You can also adjust the velocity crossover: the point at which key velocity selects the louder or quieter samples. Initial note volume is determined by velocity, with expression controlled by CC1. A pizzicato articulation is also provided as an alternative sound set (especially effective on the Jammer, more on which later), whilst the bowed sound offers polyphonic or legato modes. Legato applies only to notes played on the same string — their ranges are shown as four colours on Kontakt's keyboard graphic, or your NKS‑compatible keyboard's lightguide, if you own one. The bowed samples, incidentally, are not static — they're constantly re-bowing back and forth, exhibiting subtle variations of tone and volume as they do so.

Along with their penchant for 'virtualising' rare and unusual instruments, Soniccouture also like to explore their synthesis and sound‑design potential. The Nyckelharpas come equipped with two ADSR envelopes for amplifier and filter; the resonant filter is very well served with a choice of 23 types, plus an additional HPF. The absence of any LFOs for pitch, filter or amplifier seems like a missed opportunity, though admittedly the very nature of a Nyckelharpa precludes playing with vibrato. Nevertheless, the Effects section promises further creative scope. This flexible system comprises six slots, each hosting one of 21 effects, arrangeable (in series) in any order. If you're into serendipity, clicking the dice icon at the top randomises the selection; these all pass to a final Space (convolution) reverb, with 52 custom impulses. These same impulses are shared by an additional Convolution effect that can be assigned to one of the six slots.

Rounding off the Nyckelharpas is Soniccouture's Jammer, which also features in other products such as their Array Mbira, Pan Drums and Imogen Heap's Box Of Tricks. Essentially a souped-up arpeggiator, Jammer takes the concept for a walk, using various modifiers to make patterns evolve over time. Its default mode is Random, although Up, Down and Up/Down modes are included for a more conventional approach.

Jammer provides 12 presets, selectable via a wheel at the top of its GUI. These can be overwritten with your own creations — banks of 12 can be saved to and loaded from disk. Non-randomising variables are Rate (tempo-sync'ed to any of six note values), note length, velocity offset and swing amount. The element of evolution is introduced by a number of randomised variables: Octave spreads the pattern over a one-, two‑ or three‑octave range, whilst Note brings a touch of harmonic chaos, injecting notes offset by up to ±12 semitones in addition to those played. Random variations to timing, velocity and gaps (note muting) can be applied from subtly to drastically; engaging Double mode adds a second voice to the pattern, playing a parallel but slightly different version of the arpeggio. The notes that Jammer outputs can be constrained to specific scales, either via a drop-down menu, or playing a scale from a MIDI keyboard, or entering the desired notes on the GUI's key graphic; setting the scale to All Notes allows unrestricted playing in any key. Be sure to save your settings to the current preset before selecting a new one, though, otherwise you will lose your work! Curiously, there's no mention in the manual of whether you can assign Jammer's Preset selector wheel to a MIDI controller. The standard right-click MIDI Learn procedure doesn't work — however, you can do it via Kontakt's MIDI Automation tab by dragging the desired CC number from the list onto the wheel.

It does take a while to nail down a naturalistic playing technique, mostly keeping in mind the maximum number of strings it's possible to bow at once. Meanwhile, a trip through the excellent collection of pads, rhythmic textures and atmospheres amongst the snapshot presets demonstrates how far the Nyckelharpa can stray from its medieval origins.

If you're curious to hear a virtuoso real-life Nyckelharpa performer in action, check out the YouTube video titled 'Ingredients' by Thomas Roth. It's an invigorating alternative to other Nyckelharpa videos of slow, modal Nordic Saga folk songs (delightful as they are) performed in a Scandi forest setting by people looking like they've just come off the set of Game Of Thrones.