My first reaction to Schlappi Engineering's Interstellar Radio module was to express wonder and delight, followed quickly by the question: what is it? Initially, all I could work out was that it is definitely not a radio, as such. The manual explains that the IR is "a faulty transmission line", its wholly analogue design converting incoming audio to a high frequency pulse train then back again. You're given voltage control of the clocks behind the up conversion (the Carrier) and the down process (the Demodulator), all of which produces a voltage‑controlled radio transceiver designed for poor reception! Incidentally, this will be the only use of the word 'poor' in this review as the knobs are of high quality and the module is beautifully made throughout (although lovers of twinkly lights might have wished for an LED or two).

My first discovery was that the module delivers convincing impressions of deep space without any connection at the audio input. The simple act of playing with the frequencies of the two clock signals generates all manner of burbles, wails and swept, aliased tones. I was instantly reminded of long evenings in my youth, surfing the short wave channels. 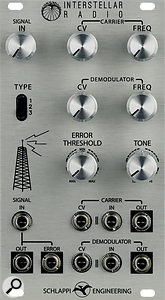 Size: 14HP. Current: +12V 40mA, -12V 30mA.When you begin to process audio, you're thrust into a complex world of sound hack and destructive soundscapes. I began with a simple vocal loop sourced from a Make Noise Morphagene, which was instantly lost in a sea of noise, wails, crackles, interference and distortion. Homing in on the raw input was no easy matter, but the impression of tuning a radio was uncanny.

As an added plus, the audio input is normaled to both CV inputs, providing instant audio-rate modulation of the clocks. By increasing the Demodulator CV amount, my vocal loop limped in, broken and howling but still recognisable. Next, by feeding in a slow LFO to lightly modulate the Carrier frequency, the ghostly effects of radio tuning amongst static were mine for the taking (and sampling).

Despite the presence of those CV inputs, the on-board oscillators are not voltage-controllable for regular melodic use — but it's still fun to drive them as if they were; the resulting strange, atonal beeps fit well with the 'interstellar' brief. You can also access the oscillator outputs directly or replace either (or both) with external signals for even more complex audio mashing.

Already it was clear that none of the Interstellar Radio's output was going to be particularly clean or pretty. There's a Tone control — a passive low-pass filter — and it does impart a certain taming quality, but I found it more applicable for giving the impression of different types of nasty radio speaker.

Another way to influence the output character is the Type switch, which selects one of three types of PLL (Phase Locked Loop) used in the Demodulator end of the circuit. The effect is partly tonal but seems to vary according to your chosen input signal as well as the two clock frequencies. Types 1 and 3 produce sound whether or not they're locked on to the signal, and when not locked, it is possible the signal is being modulated again rather than demodulated, hence rather heavy laser harmonics often spurted out. From what I can tell, Type 2 usually generates the most static, crackles and interference. Apparently this type doesn't output much unless it's locked on to the signal to some degree, but it's also the most suitable to try if you are actually trying to reconstruct the input signal. (In such a case you'd probably patch in a single high‑frequency clock to replace the two on-board clock sources.) As with much of the IR, Type selection requires a fair degree of guesswork — fortunately always the fun kind.

The Interstellar Radio has two outputs, the second of which is labelled 'Error'. It's definitely not a mistake to use it, though, because it delivers the difference between input and output audio as rendered by a comparator. Think 'ring modulator' and you'll know roughly what to expect. The Error Threshold knob sets the comparator threshold, with the central position producing something near to the regular output, while the two extremes resemble the signal input. The knob can therefore act like a distortion amount control. The Error output is a great partner for drum or note patterns in need of dirtying up, bit-crushing and generally breaking.

This module is quite specific in the range of sounds it creates and is a fascinating source of drones, interference noises, aliasing, Morse Code and AM and FM effects, along with every mysterious sound that ever leaked from a radio. Should you be excited by the prospect of such glitchy weirdness or simply wish to explore deep space from time to time, the Interstellar Radio will put you on the right wavelength.