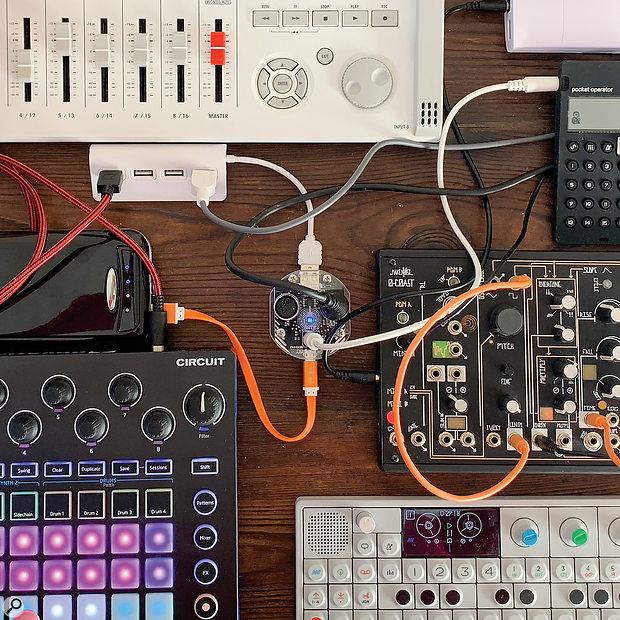 Sometimes you stumble across a product that seems to have been made just for you, like the Retrokits RK‑005, and that fake sun‑screen bottle for sneaking alcohol into gigs.

The idea of a USB MIDI host isn't new, but the RK‑005 stood out to me as a host that can run from USB power and act as an intelligent MIDI merger between both USB and traditional MIDI sources. It deals cleverly with clock, and even generates an analogue gate output to drive Pocket Operators, modulars or Volcas.

USB devices plug into one end of the tiny RK‑005; multiple devices can connect via a regular USB hub. The other end sports a micro-USB port for power (I used a portable battery pack) and can also attach the RK‑005 to a computer or iOS device as a MIDI client. On top are traditional MIDI in and out ports and the gate output. Need more MIDI ports? You can connect a regular MIDI interface via USB.

Like many others, I enjoy messing about with a handful of small synths or groove boxes, often without the laptop. My Novation Circuit and Make Noise 0‑Coast synth can talk directly via GOFM (good old-fashioned MIDI). But I'd like to be able use my Teenage Engineering OP-1 and Pocket Operator, and sometimes an iPad. I want them to play and sequence each other, and share clock.

This is exactly the kind of situation the RK‑005 is made for: with the OP‑1 and Circuit connected via USB, I got a merged output from both to the MIDI-connected 0‑Coast and the OP‑1's 'tape' transport chased the Circuit. Even better, it's not just a one-way merge: MIDI will be sent between the USB devices as well, and even from the MIDI DIN port to the USB.

When it detects multiple clock sources the RK‑005 gives priority to one and propagates it to the other connections. The MIDI DIN connector takes top priority, then the client port, then the USB hosting port. The LED pulses to indicate clock, and also flashes in different colours to show other events coming in from the various ports.

As the RK‑005 can propagate events from all sources to all connected devices, you need to manage your MIDI. Using a discrete MIDI channel for each source and destination pair normally suffices. However, the RK‑005 lets you configure four filters to manually stop certain data types or events from reaching certain ports. Settings are made via SysEx messages. When connected to the RK‑005 the OP‑1 inherits a special control mode with access to these settings. A more accessible web interface is In the works for configuring the unit.

If you connect the RK‑005 to a computer or iPad it becomes a MIDI client available to your DAW and MIDI-aware apps. USB devices connected are still hosted by the RK‑005 itself. This is an interesting alternative to directly connecting the USB devices to your computing device. For one thing it lets you use your iPad like another client, without requiring it to coordinate all MIDI as it would with a regular MIDI interface.

Throughout the review period, Retrokits have been cramming more features into the device. For example, you can now plug a USB stick or SD card containing multitrack Standard MIDI Files into your hub, and the RK‑005 will play them back and follow clock and start/stop events! If you plug in a Korg NanoKontrol you gain extensive control of the SMFs, which could be great for live performances.

For the most part the RK‑005 did what I wanted it to do just by plugging things in. It did take me a while to get my head around exactly what was possible, and the single LED is a bit overstretched trying to keep you informed of what's happening. The RK‑005 makes intelligent assumptions about what's best: for example, prioritising clock, and disabling MIDI thru from in to out if you plug into a computer. It's then down to you to override where necessary.

There are more basic alternatives (eg. Hobbytronics, Kenton) if you just need a USB to MIDI converter, and more expensive solutions from iConnectivity if you have a really complex setup, but the RK‑005 gives me exactly what I need for my hardware setup in a tiny package and continues to surprise me with its versatility.

A super handy gadget that lets you connect all your MIDI and USB devices with or without a computer.