The Eurorack scene is increasingly a hotbed of rare and interesting synthesis techniques. Qu-Bit Electronix are bringing Scanned Synthesis to the party, a form of organic wavetable synthesis which has hitherto been unavailable in hardware form. So does it bring anything genuinely new to the (wave) table? 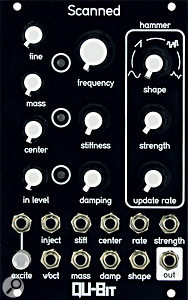 Size: 16HP. Current: +12V 100mA, -12V 13mA.Imagine for a moment a long piece string. Along that string is attached a series of objects. The objects can vary in mass and the string can vary in tension. Furthermore each object is tethered to the ground with a spring, whose stiffness can be adjusted. If you excite this string, each object will bounce up and down and will affect the movement of other objects along the string. Now imagine that you can play with the laws of physics and adjust the strength of gravity — less gravity will mean that the string moves slower and for longer.

This string isn't your sound source however. The moving string is scanned at a variable rate and it's this scanning that produces the final waveform. Hence the name.

Most of the controls on the module are dedicated to adjusting the various physical properties described above. The Hammer section controls how the string is set into motion. You choose from one of four waveforms: sine, saw, noise or dual pulse. The objects along the string are moved into that position and released by the Excite button or from the accompanying trigger input. Alternatively you can inject an external audio signal to perform the same task. The Strength control dictates how much the wave shape continues to influence the objects. The more strength, the more of that hammer shape remains in the resulting waveform. Once the objects are moving, Newton's laws (or something similar) take over.

Because of the laws of mass, gravity and damping, the algorithm has an effective amplitude decay built-in, set by the Damping control. This means that, at certain settings, the module can create short percussive sounds. Or with no damping it can drone away for days. And if all this timbral movement isn't enough, there are CV inputs for every control allowing you to automate everything at the same time.

If this sounds like physical modelling, dispel that thought from your head. Scanned will not emulate any sound you've heard before. Despite the talk of strings, it's not a string synth. It produces distinctly electronic sounds. What physics it does employ, it does so in order to make those electronics sounds organic and evolving. It can sound like FM, wave-shaping, bit-reduction, wavetable synthesis and none of these. If you close your eyes you'd be forgiven for thinking that the sound was created with three or four oscillators, all modulating each other in various ways.

Scanned is a fascinating module. At times it can sound like an entire synth in one module, moving in an organic way that is very different to most oscillators. It is great for drones or anything where complex shifting timbres are required. However, at times I found it frustrating to work with because I never really felt in control. It can be a force unto itself and spiral off in directions unintended. That unpredictability is, I suppose, part of the ethos.

The theory behind Scanned Synthesis isn't new. The last mention of it in our hallowed pages is Sam Inglis's review of Humanoid Systems' Scanned Synth Pro back in October 2007. That shows you just how rarely it makes an appearance anywhere. A good understanding of scanned synthesis theory is essential to getting good results and so it's a shame that the manual doesn't do a better job of explaining it. Internet searches are equally frustrating as most explanations of scanned synthesis are highly technical and not presented in a way that will make sense to mere musicians.

The good news is that Scanned offers something genuinely unique in the increasingly crowded Eurorack market. It is an oscillator module for those brave explorers who have all the basics covered. It will reward with a wide variety of evolving harmonic textures, without needing any external modulation, although there is plenty of scope for that too. If you have a penchant for the rare and experimental and you're willing to put in the research to understand it, Scanned should definitely have your attention. Qu-Bit must be applauded for pushing Eurorack synthesis into unchartered territories.