Previous experience with Schlappi’s Interstellar Radio helped prepare me for the multi-faceted enigma that is the Angle Grinder. Built to the same exacting standards, this all-analogue module can be an oscillator, LFO, filter or waveshaper — and unlike some multifunctional modules, this feat is achieved with a clear and accessible user interface. The only problem you might have is choosing its role on any given day. 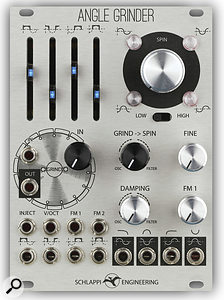 Schlappi Engineering Angle Grinder. Size: 18HP. Current: +12V 81mA, -12V 78mA.Before starting out, it’s worth getting a fix on some of the terms used. For example, Spin refers to the quad VCO/State variable filter, which uses clean positive feedback to generate four phase-related sine waves 90 degrees apart. The Damper control acts as a negative resonance and therefore when it is increased, it effectively dampens the oscillator functionality. Next, Grind refers to the voltage-controlled waveshaping section, in which the four sine outputs are compared against the input signal so parts of the waveform can be selectively sliced off. In practice, spiky harmonics are introduced as you begin raising sliders. Each slider is also given a CV input, and since the LEDs on the slider tips are of variable intensity, they provide a handy visual reference of the incoming voltage contours.

When used as an oscillator, the High setting delivers frequencies that range from 10Hz to 20kHz, while Low offers between 0.3Hz and 600Hz. Tracking is accurate over approximately four octaves and naturally there’s a 1V/oct input, a fine‑tune control and that chunky Spin knob for large frequency sweeps. At LFO speeds you can watch the phase changes via red/blue Spin LEDs; these blur into a rather fetching purple as the frequency rises. A low‑frequency option is a welcome addition to any oscillator and in this case could be of particular value as a source of quadrophonic panning.

Interestingly, the Inject input is AC-coupled, with the effect that audio-rate signals produce a kind of soft sync. Otherwise, this input serves as a direct control of Spin frequency. Some fascinating ‘push and pull’ harmonic shifts can be generated if you feed note patterns into the 1V/oct input then twist the tonality with contrasting notes played on an external oscillator connected to the Inject input.

There are two FM inputs, one with an attenuator. By default these are linear and exponential FM respectively but, via a jumper, you can switch the first to exponential too if you wish. FM1 is normalled to the Grind out — providing instant complex modulation without an external source.

While the Angle Grinder is useful enough as an oscillator, it’s arguably when filtering and waveshaping that it shows real magic. When processing external audio, the strange, tingly effects of its waveshaping become audible as you start bringing down the Spin from its highest frequencies. As is typical with waveshapers, it’s worth starting with an incoming sine or triangle wave to best appreciate the harmonic additions brought in by each Grind slider.

Unsurprisingly, more complex audio input tends to produce harsher, nastier results from the Grind circuitry, serving up everything from sizzling bites to broken, almost bit-reduced effects. The Damping and Grind->Spin knobs are key to setting the balance of the four feedback paths and the waveshaping and filtering behaviour. Panel text reminds you which direction to turn to morph between oscillating and filtering. Some of the strangest results appear from the in-between settings, when the module isn’t quite sure of its identity.

In terms of I/O, Grind delivers the waveshaping output and the four Spin outputs deliver either sine waves or the individual filter responses — low-pass, band-pass, high-pass or inverted band-pass. Having all outputs of the state‑variable filter available is a real treat and in this role, the Grind sliders become voltage-controlled non-linear feedback paths. In other words, it’s often much more wayward, unstable and quirky than a regular filter — which is also a large part of the charm.

In use, the Angle Grinder is a flexible, tactile and ingenious module whose output may not always be predictable but is never boring. It combines harmonic crunching, distortion and sync-like textures with filtering and VCO/LFO capabilities. The shifting between roles is nicely implemented and with generous I/O and high‑quality construction, the Angle Grinder would be a distinctive and versatile addition to any system.