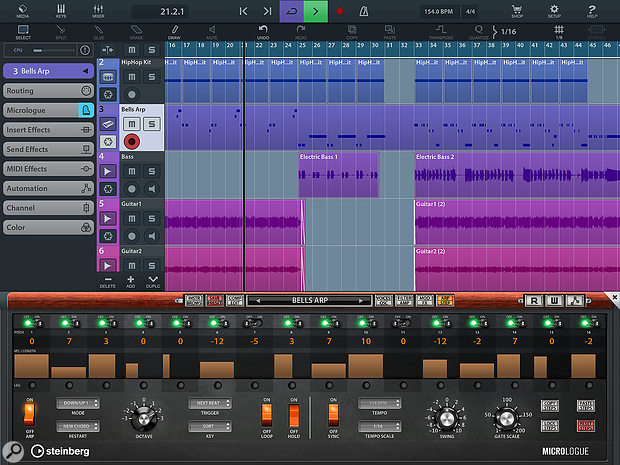 Steinberg's Cubasis is one of the more popular and powerful DAWs/sequencers for the iPad — and since its first release, this app has just felt 'right', striking a sensible balance between the range of features, the scaled-for-touchscreen GUI, and resource demands that are appropriate to this platform. As the platform's capabilities have evolved with each generation of iPad, so too has Cubasis, and with appropriate external hardware (such as mics, monitors and audio interface), Cubasis running on an iPad is now capable of some pretty serious recording tasks.

Mark Wherry summarised the key developments when Cubasis v2 was released (SOS January 2017: https://sosm.ag/cubasis-2-0117), but Steinberg have continued to expand the feature set with various .X updates. The latest of these takes us to v2.7, and as well as the usual array of maintenance-style tweaks there have been a number of new additions, many focused on AU plug-in support. As AU under iOS is still to become the ubiquitous technology that AU and VST have become on the desktop, this progress is welcome.

Indeed, the most obvious new feature since 2.0 — support for full-screen AU plug-in displays within Cubasis — could be an important change for other iOS music app developers, particularly those with sophisticated virtual instruments in their catalogue. While we've seen lots of existing audio processing/effects apps developed for iOS AU v3, fewer of the big-hitting synths have made the transition because of their more complex UIs. Hosts capable of full-screen AU plug-in support should make life a little easier for developers.

It certainly ought to make things easier for the user and that's easily demonstrated, because a further addition is support for the free ROLI NOISE app within Cubase. This gives you a touchscreen version of the innovative ROLI Seaboard as well as a neat Drum Grid visualiser. And (yay!) this includes a full-screen option. No, it's obviously not as tactile as a hardware Seaboard, but it is a lot of fun, and with more room for your fingers to work it is much easier to play. Here's hoping that more developers follow suit and embrace the capabilities offered by the full-screen AU format.

Cubasis running on an iPad is now capable of some pretty serious recording tasks.

The other major AU-related change is support for MIDI CC control of AU effects plug-ins via external controllers (provided, of course, that your plug-ins also support it). Again, this ticks another familiar and useful desktop feature off the list.

The gradual improvements for AU plug-in support in each Cubasis update are great to see. Hopefully, this is another useful step forward in bringing the required maturity for AU under iOS.

A further welcome addition, albeit as an in-app-purchase (£4.99$4.99), is the Micrologue Arp virtual instrument (pictured above). Based on the synth of the same name in the desktop version of Cubase, it's scaled for the iPad and ships with over 70 very usable presets. As the name suggests, it features a built-in arpeggiator — and for all the wonderful third-party synths now available for iOS, Micrologue Arp is well worth adding to Cubasis; it's compact, low on resource demands and sounds great, and the arp function is really rather cool.

OK, so Cubasis might not quite be Cubase Pro on an iPad, and it's easy to think of workflow features I'd love to see transition from the desktop version by the time v3.0 rolls around (Folders and Group Channels would be top of my list). But it still offers a heck of a lot of features for a modest price and, in my own experience at least, is both stable and slick in use. All in all, a very impressive app for iPad-based music makers.