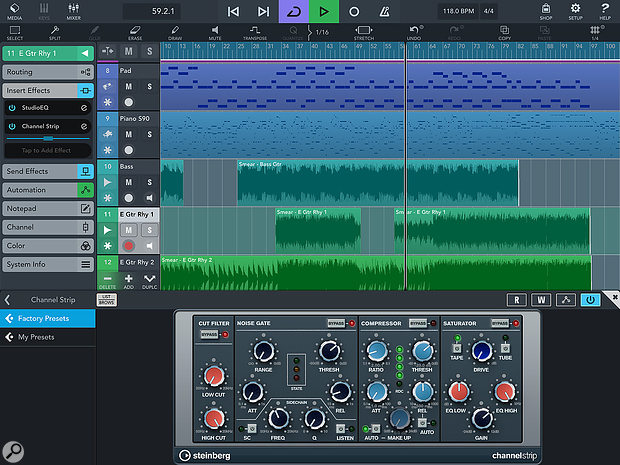 While the Cubasis UI remains familiar, there's a whole raft of improvements in version 3.

For those who want an iOS workflow that closely follows established desktop conventions, Steinberg's Cubasis is probably the most popular DAW/sequencer app currently available. Naturally, the feature set is scaled down from Steinberg's flagship Cubase Pro, but Cubasis has always struck an excellent balance between a well-chosen set of core features, a slick UI that works well on the iPad's relatively compact touchscreen, and a price that makes it accessible to almost anyone with a serious mobile music-making habit.

The latest update, to Cubasis 3, is a significant one. Indeed, it's so significant that Steinberg are presenting this as a new app rather than a free upgrade for current Cubasis users; Cubasis 2 will remain available via the App Store at a reduced price. Some may grumble at this — and it would be helpful all round if the App Store made a system for 'upgrades' more straightforward for developers — but it's worth noting that any in-app purchases made in Cubasis 2 can be activated in Cubasis 3 at no additional cost. As Steinberg have already provided Cubasis users with over 30 free updates since it first went on sale, I think they should be cut considerable slack. After all, it's important for all users that the Cubasis project remains financially viable. 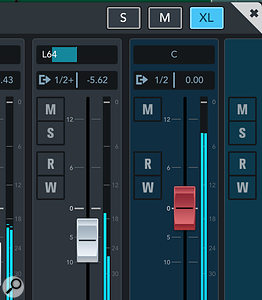 The new UI is more easily customisable. For example, you can set the Mixer view to one of three diferent zoom presets.So, what's new in Cubasis 3? Well, lots actually — it has pretty much been rewritten from scratch. This has enabled Steinberg to take full advantage of more recent developments in iOS and in Apple's hardware, and of particular note is that it also means we now have universal app status; for the first time, Cubasis can run on your iPhone as well as your iPad. (iOS13.0 or later is required, so you'll need a device that supports that — an iPhone 6S, or iPad fifth-generation or later, for example).

As you'd expect, Cubasis 3 on an iPhone demands more scrolling, good finger dexterity and decent eyesight, but having undertaken a quick tour on my (now aging) iPhone 6S I'm left impressed at just how well Steinberg have translated the workflow to the smaller screen. While working is undoubtedly faster on a larger iPad screen (the new version ran very smoothly on my first-generation iPad Pro), having the option to carry Cubasis 3 around in my pocket is very welcome! 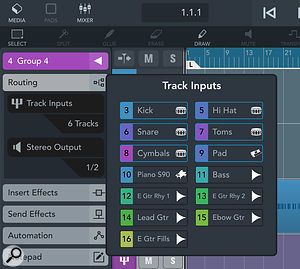 Group tracks are a major new feature, and allow easy configuration of the tracks within a Group.While Cubasis 3 will seem very familiar to users of previous versions, Steinberg have made a huge number of refinements to improve both the workflow and visual experience. For instance, editing of audio, MIDI and automation has been improved substantially, while the bundled effects and instruments have been visual revamped.

Perhaps even more useful (particularly given the iPhone support) are the new UI scaling options. You can zoom in/out on various views, as before, but you now also get some UI presets that allow you to change the display quickly. This includes the Mixer, for which a combination of full-screen mode and three channel-zoom levels make for much easier operation.

To me at least, Cubasis has always represented the best balance between features and usability in any iOS DAW/sequencer...

Of the other highlights, top of my personal list is the addition of Group tracks. If you're familiar with Cubase, you'll know this is Steinberg's take on creating subgroup buses — so you can route several tracks (for example, a set of individual drum tracks) to a Group track. You can then control the overall volume of the Group or apply Group-level effects before the audio flows to your master output.

Creating a new Group track is easy, and standard (audio or MIDI) tracks can be added to and removed from Groups with ease. Group tracks make all sorts of mixing tasks much easier, including the ability to focus your broad-brush mix–level automation down to a few instrument groups. It's a simple but powerful addition. 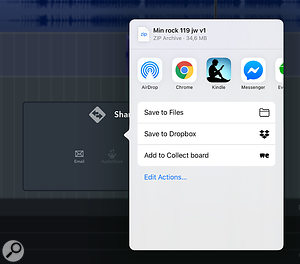 It's now even easier to move projects you start in Cubasis to the more powerful Cubase DAW software on a Mac/Windows computer.There are all sorts of other useful refinements and additions, all of which either improve the workflow or offer new possibilities. For example, getting into the technical nitty gritty, the MIDI editing resolution has been increased to 960 pulses per quarter note. If you're particular about the precision of your MIDI sequencing, this is a very useful step forward. Also, tracks can now have up to eight insert and eight send effects, and these can be re-ordered easily, and their position set pre- or post-fader. Events can now be colour-coded vertically — and in the absence of something like Cubase's Marker track this provides an easy way to identify the different musical sections in a project. Automation is now supported within Micrologue ARP (if you have the Micrologue in-app purchase) and AU MIDI effects. Oh, and Cubasis now includes a proper History List for undo/redo operations, making it easier to navigate individual steps in your project editing timeline.

Another personal highlight is the improvements to the MediaBay, where you manage your various projects, audio files, MIDI loops and so forth, and can find options for mixdown and exporting your projects. There are many improvements, but the option to use AirDrop to transfer your Cubasis project to your desktop machine, and then have Cubase open the project, is super-cool. If you've used only Steinberg virtual instruments and effects in the Cubasis project, their Cubase equivalents will automatically appear in the desktop version of the project too; it all worked very smoothly for me.

If you purchased Cubasis 2 recently at full price, you may feel a little aggrieved at the lack of an upgrade route to Cubasis 3. But if you've been making music with Cubasis for a while, Steinberg have added more than enough to the Cubasis experience to make v3 a very tempting proposition at this price. To me at least, Cubasis has always represented the best balance between features and usability in any iOS DAW/sequencer, and in Cubasis 3, Steinberg have raised a high bar even higher.