In this library Spitfire extend their 'swarm' concept, formerly applied to mandolins, harps, marimbas and orchestral sections, to percussion. Perhaps due to some austerity measure, this particular swarm consists of only three players (top percussionists Paul Clarvis, Frank Ricotti and Gary Kettel), but they do buzz around a lot, spending half their time playing tuned percussion and the other half coaxing improbably expressive performances out of a set of ethnic drums and instruments. 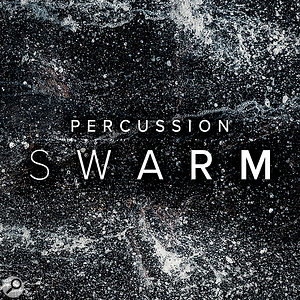 The whole shebang (60GB installed) was recorded in Spitfire's spiritual home, London's Air Lyndhurst Hall, which imparts its usual luxuriant reverb trails to the samples. In another return to form, the makers eschew the proprietary plug-in designs of some of their recent releases in favour of the ubiquitous Kontakt (version 5.6.8 or higher). For those who don't own the full version of Kontakt, the free Kontakt Player is included.

If you're used to old-school percussion libraries consisting largely of single hits on individual instruments, this collection may come as a pleasant surprise. Though it's capable of percussive power, the emphasis is on more subtle sonorities and unorthodox articulations. Evolved over the last five years and inspired by granular synthesis, the 'swarm' concept creates sustaining articulations out of instruments which normally play short notes, providing composers with original-sounding beds and textures that don't conform to traditional orchestral stereotypes.

Spitfire placed the three percussionists at widely spaced stations across the hall and recorded them playing together on identical instruments. There are three main performance styles: 'clouds' are long, looped notes made up of random, uneven repeated hits on a single note, with an on-screen slider controlling note density. The eponymous 'swarms' are repeated short notes which start quietly and sparsely and grow in volume while gathering pace — having reached peak speed and loudness, the players reverse the procedure and subside into quietude (a crescendo-diminuendo by any other name, but 'swarm' is snappier). Short single hits were also recorded for each instrument.

Diving straight into the sounds, I very much enjoyed the xylophones and marimbas soft stick hits, which bring out the full, plummy tone and resonance of the instruments. You can use their 'pitched cloud' performances to create undulating chord beds, which I found inspiring to play over — none more so than the marimba's carelessly misnamed 'atonal (sic) cloud' style, which are actually three-man improvs in the easy-on-the-ear, decidedly non-atonal major pentatonic scale, chromatically mapped to all 12 keys. A lovely soft, rippling effect like a musical babbling brook.

Other ear-catching timbres include a decorative glockenspiel trio making a tinselly brushed sound like fairy cash registers, and a set of fabulous bass kalimbas which resound gloriously in the big hall: the kalimbas' 'swarmed sticks' artic is a wonderfully ominous, gurgling racket suggestive of something nasty in the plumbing. While that's one to save for a rainy day, the tubular bells soft stick hits are an instant must-have — for anyone with half an ear for timbre, their mystical dreamy chimes are to die for. The enigmatic 'chimes & phones' instruments are equally stupendous, producing a lovely, soft misty cloud of metallic overtones reminiscent of Tibetan bowls.

Also included are angklungs (a tuned Indonesian rattle with a distinctive liquid-sounding wooden chime), an exotic instrument which merits greater use in scores. The library's tuned perc is played variously with sticks, hot rods, fingers and violin bows: the crotales (tuned mini-cymbals) supersonic bowed samples are magically ethereal, so pure and sustaining you might mistake them for an electronic sound.

Adding their earthy tones to this pristine-sounding percussion is a lightly-sampled selection of ethnic drums. The satisfying bassy clump of the Thai rammana goblet drum could be used to accompany shots of Roman centurions marching up the Appian way (wrong century, wrong continent, but who cares?), while the Tibetan double-headed damaru drum's 'swarmed fingers' samples would enliven any scene featuring galloping cartoon animals. Less fancifully, Africa bata and udu drums and Persian daf give a nice world-music flavour. A trio of pitched tongue drums add an attractive and mysterious dim metallic chime, and a set of tuned low-pitched rototoms (which could pass for softly played timpani) contribute nicely played, sensitive improvs and menacing soft swells.

Inevitably, there's also a 'warped' sound design section powered by Spitfire's Mercury Synth (which contains some cool internal effects). I found some of these sounds to be very beautiful — just one sustained note on the celestial 'Gondwana — Selected Ice Works' and 'Eurasia — Float Away' presets were enough to spark a furious outbreak of keyboard improvising (not that I need much excuse). The endless reverb and flanged distortion of 'Laurasia' evokes the sound of the Arctic wind blowing over deserted snowscapes, perfect fodder for nature film composers. For more combative settings, the enormous twangy bonk of 'Rodinia — Changing Gears' works well for aggressive drum parts or banging synth bass lines.

In keeping with Spitfire's multi-miked traditions, the library offers a large choice of listening perspectives. The main patches provide six mic positions (super close, close valve, mids, Decca Tree, ambient and outriggers), while the 'close pans' option gives you close-up mikings of the individual players, each of which has a valve mic option — this enables you to isolate and pan each musician's part for contrapuntal rhythms. In addition, there are four stereo mixes created by engineer Jake Jackson.

On the day I write this, the sad passing of Monty Python's Terry Jones brings to mind a line from The Life of Brian, in which Jones (who directed the film) steals the show playing Brian's screeching mother Mandy Cohen. Mandy: "What are all those people doing out there? C'mon, what've you been up to, my lad?" Brian: "I think they must've popped by, or something". Mandy: "Popped by? Swarmed by, more like! There's a multitude out there!" There's certainly a multitude of great sounds in here, and though it may not have the power to inspire a religious movement, I expect Spitfire Audio devotees will swarm out and buy it.