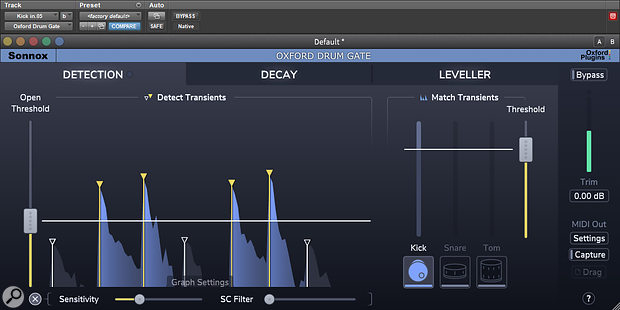 I've always been a regular user of gates on drums, and have had to learn to accept the limitations of what can, at times, be quite a crude tool. Typically, a modern drum sound might involve gating the close drum mics to eliminate any unwanted spill, before blending them with the overhead or room mics. This can, however, end up being something of a compromise, and the controls on a traditional gate have to be carefully massaged so that we don't get too much 'chatter' as the gate periodically lets through unwanted cymbals and so on. Avoiding chatter often means we have to set the threshold lower than we would like, and as a result, we sacrifice the quieter 'ghost notes' that can play a big part in the feel of a live drum part.

Many gate plug-ins now have advanced features such as frequency-dependent triggering and lookahead, and for the most part, if a drum kit has been well played and well recorded in a decent room, we can very much make it work — as engineers have been doing for many years. Poor mic placement and choice, or a drummer who hits his cymbals harder than the drums themselves, can easily bring the ratio of spill to direct sound to the point where a more traditional drum gate becomes pretty useless. If the overheads or room mics are also badly recorded, or the room itself isn't great, then we can find ourselves having to lean on drum samples more than we would like, or even go down the route of manually isolating individual drum hits.

In recent years, a few plug-in developers have released tools that aim to go beyond what traditional gates are capable of, but the ones that I've tried — until now — can create as many problems as they solve. Sonnox are the latest company to tackle these issues, and as I'm a fan of some their other plug-ins — and do a lot of drum mixing! — I was excited to try out their new solution to what feels like an age-old problem. Oxford Drum Gate is available for Mac and PC in all the usual native formats.

Sonnox claim that their Oxford Drum Gate uses an "adaptive, intelligent process" that allows precise and controllable drum gating even with very challenging source material. It's this aspect of the plug-in that makes it particularly interesting, and I'll explain why shortly.

The plug-in as a whole has three tabs, each containing tools that relate to a different aspect of drum processing. The first tab is the 'detection' part of the process and is where the main action takes place. A graphical display shows the transients in the input signal, and a slider controls the threshold that tells the gate when to open or close. The first stage in setting up Oxford Drum Gate is to tell the plug-in whether it is dealing with a Snare, Kick or Tom mic, by clicking on the appropriate option in the Match Transient section. Engaging one of these options tells the plug-in what it's looking for, and even transients that are above the open threshold will not be allowed through if they don't fit the chosen profile.

In practice, though, and especially if there's lots of spill, simply selecting a Match Transient option isn't always 100 percent reliable — which brings us to the very clever 'learning' aspect of the plug-in. If there is a problematic drum hit that isn't being allowed through the gate, you can loop that section in the host DAW and then hit the Learn Unmatched control. When the small triangle above the transient goes from white to yellow this tells us it is now being allowed through the gate. The reverse of this can also be accomplished using the Remove Match option, which helps the gate to learn to block out a particular type of transient. These problems can occur repeatedly throughout a drum track, and the great thing about this approach is that rather than our having to adjust the settings for each individual instance manually, the plug-in 'learns' and adapts after we've fixed a few of them — impressive stuff.

If this level of control still isn't enough, however, there's also a sensitivity control slider: increasing the sensitivity detects smaller transients, while you might need to reduce it if you're seeing multiple detection markers on a single transient. Even more detailed control is enabled by a low-pass side-chain filter, which can help pick out kick drums or tom hits. 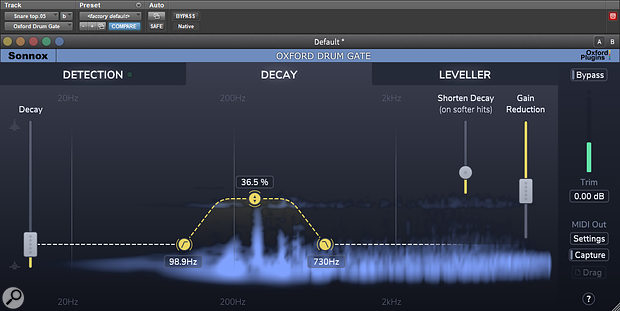 One of the plug-in's innovative features is the ability to select a frequency-selective decay time, so that, for instance, the ring of a tom or snare can be allowed through while cymbal spill is gated out.

The Decay tab also allows for plenty of precise manipulation, with frequency-dependent control possible over the release or 'decay' response of the drum gate. A graphical waterfall-style plot shows broadly where the energy of a source is, and this can help steer the release of the gate to, say, let the low-mid body of a snare ring out whilst keeping any cymbal bleed firmly tucked away. The first step in this section is to adjust the master Decay control at the left of the tab; you can then extend the 'resonant decay' within a particular frequency range. There's also a master gain control which allows you to blend the gated signal against the ungated signal as you might on a conventional noise gate. There's also a slider that allows you to shorten the decay on softer hits, which could be handy if you're trying to manipulate a particularly dynamic part.

The final tab contains controls that go beyond merely gating the input, and which introduce dynamic control over the transients that remain after the gate settings have been fine-tuned. You can divide the signal into 'loud' and 'quiet' transients and then decide if you want to pull each of these parts more towards a louder target, or a quieter one. Used simply, this can just make the louder hits feel a bit more consistent; alternatively, if you've used the gating features to create a dynamic but isolated snare track, for example, you might want to make the ghost notes a bit louder, more consistent or perhaps bring them down in volume. In one sense this is something of a bonus feature, in that there are already dedicated plug-ins for rebalancing the relationships between the loudest and quietest parts of a drum performance, but it's very handy to have it all in one place like this.

Finally, mention should be made of the plug-in's ability to output MIDI notes for any transients that are let through the gate. These could be used to drive a drum machine, virtual instrument or another MIDI-compatible source. There's also the option of exporting the audio as a MIDI track, which could be very handy if you like to add drum samples using something like EZ Drummer, rather than triggering them live from the audio tracks.

In an age where we often have to mix drums recorded in less than ideal rooms, Oxford Drum Gate means we don't necessarily have to reach so quickly for the samples.

If you're mixing a well-recorded drum kit, it should take a matter of seconds to get Oxford Drum Gate to perform like a traditional noise gate, and in this situation, it's unlikely you'll need to use the Learn Unmatched feature to get good results. In this scenario, I found I could quickly get creative with the Decay section, dialling in different areas of the frequency range for, say, the top and bottom snare mics. I like lots of body on the top snare at around 200Hz, and the Decay options let me push this without having to do any big EQ boosts. Toms can often be tricky to work with, but this plug-in opens up lots of creative options, and again, the ability to fine-tune the decay can be a big time-saver if you usually find yourself having to manually edit tom hits or draw in fades. 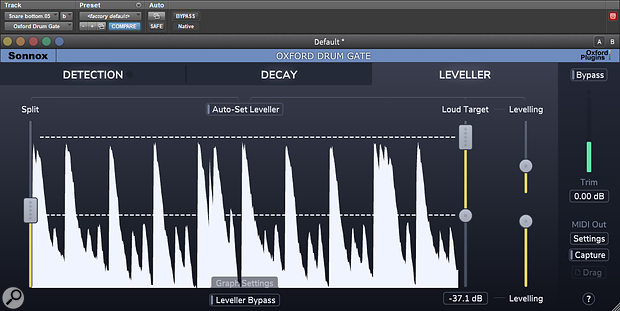 The Leveller tab allows the dynamics of the gated signal to be rebalanced in natural — or unnatural — ways.

Oxford Drum Gate's unique features really come into their own when you're dealing with an inconsistent drummer or a recording with lots of bleed. After a little experimenting, I found myself flicking between the Detection and Decay tabs to shape the sound of a drum with the resonant decay controls and the main gate threshold. The settings that gave me the sound I liked, however, also meant the gate wasn't letting through the occasional transient. All it took was a couple of goes with the Learn Unmatched feature, and the detection algorithm quickly got the hang of it. The sounds I was able to create with this technique would simply not be possible with any other gate plug-in that I've used, and the Leveller tab was useful to help an inconsistent drummer feel much more solid.

If you work in genres that need very tight, repetitive live drums, this is going to be especially valuable. The ability to split the controls and rebalance the quieter sections independently is deceptively powerful, and I found things quickly got quite unnatural-sounding if I wasn't careful! The control is all there, though, and in an age where we often have to mix drums recorded in less than ideal rooms, Oxford Drum Gate means we don't necessarily have to reach so quickly for the samples — which is very welcome indeed.

I'm conscious when writing this review that I've made Oxford Drum Gate sound like quite a complicated plug-in! It did feel that way at first, but once you've got your head around the Match Transient feature, you open up an extremely powerful set of controls for working on a multitrack drum recording. It's so powerful, in fact, that if you're already accustomed to a particular way of mixing drums, it can be something of a curve ball. For example, I've never been very happy with the experience of using conventional gate plug-ins on kick drums, but because the Oxford Drum Gate Decay controls allow you to let the part of the drum you want to hear ring out, it can create very natural-sounding results whilst removing all the bleed, if that's what you want to achieve. Even outside kick mics can be cleanly isolated as never before, and once you've got these nicely isolated close mics, you've then got to figure out what to do with them! That's a nice problem to have, though, and this tool is capable of highly efficient traditional gating as well as 'fixing' drums that have been badly recorded. There's a bit of a learning curve, but if you work with live drums, I highly recommend giving it a try.

There are plenty of gates around, but the only plug-ins I know of that target drum processing in somewhat similar ways are Accusonus's Drumatom and Sound Radix's Drum Leveler.

Sonnox have produced a comprehensive and feature-packed drum gate plug-in that has some truly innovative features. It takes a little time to master but is well worth the effort.