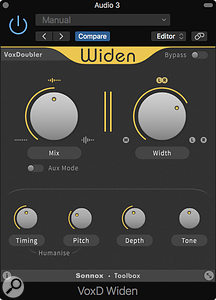 Sonnox are well known for taking an existing processing idea and adding new twists of their own to make it special. That approach can end up handing the user a lot of parameters to adjust, but VoxDoubler is part of a new, much simpler, series of effects and tools that delivers the kind of sonic quality you’d expect from Sonnox, using only a small number of controls. VoxDoubler is authorised either to an iLok key or to a specific computer, and you get two authorisations. Sonnox say that the technology behind VoxDoubler is based on the advanced analysis of the pitch, amplitude, duration and timbre of incoming audio.

VoxDoubler is actually a set of two closely related plug-ins called Widen and Thicken. Both are based on the same operating principle, and both present a similar six-knob control layout. Widen generates two new mono voices and pans them to the left and right of the original vocal to create a triple-tracked effect, while Thicken generates a single stereo second voice and adds it to the original vocal to produce the effect of two singers working into a stereo pair of mics. While Widen was originally conceived for use with mono sources, it will still accept a stereo source. And, while the central idea is to deliver a more natural double or triple-tracked vocal sound than you get from traditional ‘delay and detune’ methods, these plug-ins also work really well on guitars and other instruments. 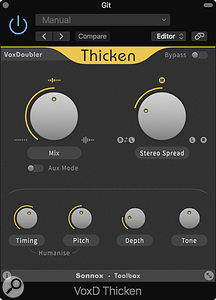 Apart from the rightmost of the two large knobs, the controls are the same in both plug-ins, with the leftmost Mix control adjusting the wet/dry blend; there’s also a switch to engage a wet-only Aux mode for use as a send effect. In the Widen plug-in, the right-hand control adjusts the width of the two added mono voices between mono and hard-panned L/R, whereas the Thicken plug-in’s Width control adjusts the degree of stereo spread of the added voice, with mono in the centre position and the left signal changing places with the right when the knob is to the left of centre.

To allow the user a useful degree of control over the sound without life getting too complicated, the smaller knobs in the Humanise section control the extent to which the timing and pitch of the doubled voices varies from that of the original, while Depth makes the added voices less prominent by delaying and softening them. Tone is a high cut/boost control and can be used either to soften sibilants in the doubled voices, or as a high boost to add presence.

Either plug-in can be used to create varying degrees of ADT for a lead vocal, or on backing vocals to increase the apparent number of singers. The ADT sound produced by either plug-in goes from a subtle doubling to a more obvious John Lennon-style slapback, and the most natural sound occurs with the Pitch control in the first half of its travel. I found Depth helpful in moderating the artificial doubling of transients that most ADT methods suffer from, and because the pitch and timing elements aren’t static, the end result sounds much more like true double-tracking than the more common alternatives.

The main difference between the two plug-ins seems to be how the results sit in the stereo field: Widen has a more spacious character, presumably due to it adding two voices rather than one. While both plug-ins work in a similar way, Thicken really does add a sense of thickness without over-emphasising the doubling aspect, while Widen is noticeably more expansive-sounding, with a more obvious doubling element. However, both do a really good job with mercifully few controls, and I love the results when used on electric guitar. This is one plug-in that will see plenty of action in my studio.