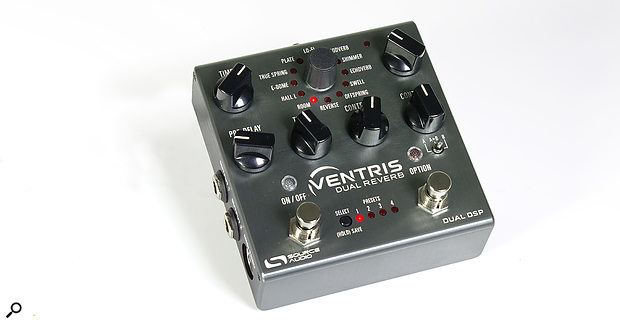 With two separate studio-quality reverb engines, this pedal isn’t only for guitar...

Compared with most reverb pedals, Source Audio ask a lot of money for their new Ventris Dual Reverb — but the price is more than fair, given that this is actually a serious, genuinely studio-quality reverb that has somehow been crammed into a pedal format. In fact, when you discover that the pedal actually houses two separate reverb processors, you might even come to the conclusion that Source Audio are selling it too cheaply! And that’s before you consider that, as well as the plentiful control via the front panel, there’s deeper geekery available courtesy of free MacOS and Windows editing software, as well as an imminent smartphone/tablet control app...

There’s a choice of 12 onboard reverb algorithms, which Source Audio call ‘Engines’. These are accessed via a rotary switch, and run on two independent 56-bit signal processors. Currently, this can be expanded to 14 Engines using the editing software — any of the existing Engine slots can be replaced by the new ones — and further Engines are under development. The reverbs currently on offer cover natural spaces such as Room and Hall, E-Dome, True Spring, Plate, Lo-fi, ModVerb, Shimmer, Echoverb, Swell and a slightly oddball effect called Offspring, which includes a repeating delay that’s set using the pre-delay control. Shimmer does the usual trick of shifting the reverb tail up by an octave to create a string-pad type of backdrop, but the interval can be changed using the editor. 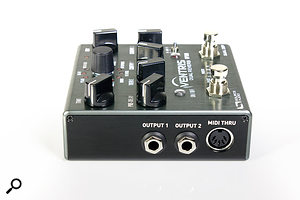 The pedal has dual analogue inputs and outputs and provides comprehensive stereo routing options: stereo in/stereo out; mono in/stereo out; mono in/mono out; or mono in/mono out plus a dry signal on the other output. Which probably leaves you asking why there are two processors... Well, one thing this makes possible is switching between different reverb presets without cutting off the reverb decay from the first one. You could also use them both at the same time to combine two different algorithms — though the spillover function (allowing reverb tails to continue when switching presets) is obviously unavailable when both processors are used in combination. A small three-way toggle switch selects processor A, processor B, or both processors, and this switch also allows A or B to be set up separately: if the switch is in the A position, the panel controls adjust the A processor; if set to B they set the B processor; and when in the A+B position, Control 1 adjusts the wet level of Reverb A and Control 2 the wet level of Reverb B, while Mix controls the level of the dry signal. The user can also decide on true bypass, buffered bypass, or soft bypass (with reverb tails), as selected in the editing software.

If you decide to combine the algorithms, you can have one running into the other or you can run them in parallel, with the stereo outs of both mixed. Alternatively, you can change this routing arrangement using the editor to have one mono reverb output per channel. 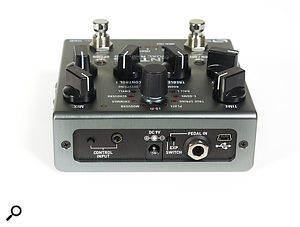 The rear panel includes a USB connection for use with the software editor, as well as a socket for an external footswitch or expression pedal.While the pedal has only four preset LEDs, it can actually store and access eight user presets for Reverb A and eight more for Reverb B, if you set up Preset Extension Mode in the Neuro editor — up to 128 patches can be accessed via MIDI. The Ventris can accept MIDI Program Change messages and Continuous Controller messages via its regular MIDI DIN input or its USB port, or in conjunction with the Neuro Hub — and it’s the latter addition that sets this range of Source Audio pedals apart from most other pedal designs. A MIDI thru DIN connector is also included.

The power inlet hooks up to the included 9V DC supply, and alongside this is a mini-USB port which allows editing via the Neuro Desktop Editor (I should mention that this was a beta version at the time of writing, though the pedal itself was a final production model). When connected via USB to a computer, the Ventris appears as a class-compliant USB device and so needs no drivers. A further 3.5mm mini-jack socket accepts a control input from the Source Audio Tap Tempo Switch, Dual Expression Pedal, Reflex Universal Expression Pedal, Neuro Hub or Hot Hand Motion Controller.

All of the main controls are laid out on the pedal’s top panel. There are two footswitches, one for on/off and the other designated ‘Option’. The Option control’s functions change according to the selected reverb Engine, and it provides two operations for each — it responds differently to being tapped or being held down. Practical settings for each reverb type are called up by default. The Option switch may also be set up to activate other functions, such as the Hold (reverb freeze) function or to step through presets, again via the editing software.

The rotary Engine selector has LEDs in each position to show which reverb algorithm is active for the selected processor, and there are the familiar controls for Time, Pre-delay, Mix and Treble, though some of these functions change when a more off-the-wall reverb type is selected. Two further knobs, Control 1 and Control 2, adjust specific parameters according to which type of reverb Engine is active. For example, if the Room engine is running, these adjust Bass and Mod Depth, and the rate of the modulation can be adjusted using the Neuro Editor or by tapping the right-hand Option footswitch if assigned to Modulation Rate. These controls may also be assigned to other functions via the editor. Four LEDs between the footswitches indicate presets one to four (or five to eight in Presets Extension mode), with a button to the left doubling as Preset Select and Save (when held). Separate status LEDs indicate on/off and Option status.

The quarter-inch footswitch input jack (selectable for switch or expression pedal) allows a range of assignments such as preset scrolling, processor switching, tap tempo, reverb Hold for freezing the reverb tail, and runaway reverb — which is similar to Hold but also cranks up the feedback level for more dub-style effects. An expression pedal can also be used to adjust multiple parameters at the same time, with independent depth and direction settings for each one. As mentioned earlier, the mini-jack input can be used as a second control input.

If integrated into Source Audio’s Neuro system, controlled by a Neuro Hub, the Ventris can be combined with up to four other pedals to form a comprehensive programmable effects system, in which all the pedals in the system switch appropriately when a new multi-pedal scene is called up. Up to 128 scenes can be saved and recalled using the Neuro Hub, combining the power of a multi-effects system with the ease and flexibility of a traditional pedalboard. Unfortunately I didn’t have one of these to try for my review tests, though I did see the system working at NAMM last year and was impressed. 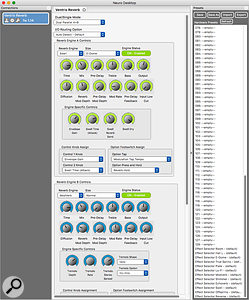 The 12 onboard presets can be augmented with others using the software editor, which can also be used to access more settings than on the hardware unit alone.Input 1 can accept unbalanced signals at instrument or line level. When not used as a second channel for stereo, the second audio input (a TRS jack) may be used as an external effects loop input, using output 2 as a send, or as the data connection to a mobile device running the Neuro app. In the last scenario, a connection must be made between the mobile device’s headphone jack and input 2 on the pedal, using the included 3.5mm to quarter-inch TRS jack cable (the jack tip carries audio and the ring carries data). 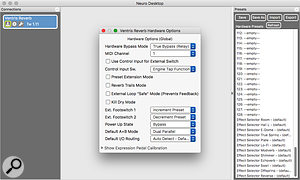 The free Neuro Desktop Editor or mobile app grants access to additional parameters and those bonus reverb engines, as well as enabling the saving and sharing of presets. There are 12 controls specific to each Engine plus additional control assignment and dual engine configuration controls. The Ventris also integrates comfortably into conventional MIDI-controlled setups.

Once you get your head around the fact that Source Audio call their reverb algorithms Engines (most other manufacturers seem to call them processors), the Ventris is extremely user friendly, and can be approached on many different levels, from a stand-alone stompbox to being part of a sophisticated multi-pedal Neuro Hub system. Alternatively it can be integrated into a MIDI setup or used as a studio reverb. The deeper editing features accessed via the Desktop Editor are all fairly intuitive — and the beta version I was using on my Mac behaved perfectly well. 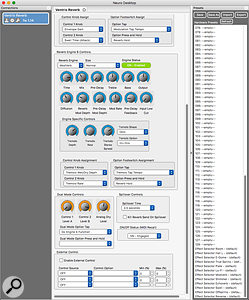 The quality of the reverb on offer here is excellent; the designers really have gone all out to give expensive studio reverbs a run for their money. I’d like to give particular praise here to the Spring algorithm, which captures the twangy essence of the real thing perfectly to my ears, and to Shimmer, which sounds simply luscious, with no obvious pitch-shifting artifacts. Stick Shimmer on one processor and Reverse on the other in A+B mode, and you’re in hippy heaven! All the conventional spaces and plates deliver on authenticity, though, and pitch modulation can be introduced to add texture to the Room or Hall reverbs. Mod Reverb is actually a tremolo effect that can be applied to the wet signal, the dry signal or both.

The editor software really is a doddle to use, allowing you to customise your reverbs and control options without having to do anything too scary, so don’t be afraid to try it — all those extra features will doubtless prove attractive to those building more complex pedalboard systems. Importantly, though, even if you never touch the editor software, you won’t feel cheated by what the Ventris offers.

If you’re one of those players who just wants a splash of generic reverb to take the dryness off their live sound, the Ventris will be overkill — but if you use reverb in a more overt way, I recommend it highly.

Although they lack the impressive Neuro connectivity, pedals of similar quality are available from the likes Eventide, Strymon, Meris and TC Electronic.

A superb reverb pedal for those musicians who use reverb as an integral part of their sound. It can be used in a very straightforward way or you can use it as part of a sophisticated system.