Available as an EZX expansion pack for Toontrack’s EZdrummer 2 and with an imminent release in Superior 3 format, UK Pop aims to wrap up six decades of UK pop drum sounds using four kits plus extra parts and cymbals, all recorded at RAK Studios in London, where many British hits were created. This is a tough call as the UK pop drum sound is actually very diverse. Just listen to Keith Moon, Ringo Starr, Charlie Watts, Phil Collins, Coldplay or Ed Sheeran and you’ll appreciate just how wide the range of UK pop drum sounds really is. 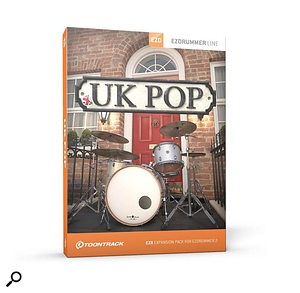 The drummer and MIDI pattern player for these sessions is Ash Soan, who has played with Adele, Ronan Keating and many more, and production is by Mark Taylor, who has worked with everyone from Rod Stewart and Cher to Daniel Bedingfield. The two have worked together on several occasions, so their aim for this expansion pack was to recreate some of the signature sounds they’ve used on their records.

The kit layout is a simple two-tom, single-kick setup, and the usual drop-down menus on each drum and cymbal access alternative drums. A mixer page allows you to balance the kit parts with added mono ambience, stereo ambience and reverb. A pair of leather gloves indicate the handclaps and a pair of boots the stomps, plus there are the usual EZdrummer percussion parts and MIDI composition area. In addition to regular stick playing, the kits included towel-damped examples and mallet hits, which get close to the classic Ringo Starr sound. There are seven preset kits with numerous kicks, a choice of toms and cymbals and 11 different snare drums (ranging from thick and heavy to bright and ringing). Swapping and re-tuning kit parts is easy if you want to create your own kits.

A lot of mics were used in the making of this EZX library, including three sets of overheads (one condenser and two sets of ribbons) augmenting the close mics. On top of that were close and distant ambient mics and three further mono mics.

Clearly it is impossible to cover the entire range of UK drum sounds from the past 60 years, but this EZX pack still offers a very wide range of sounds with a particularly wide choice of snare drums. As Toontrack suggest, the kits sound fairly dry until you start to dial in the ambience or add reverb, and most have a fairly big, warm sound that is refreshingly unpolished when compared with current US drum sounds. The claps are also very different from ones that come in the standard percussion section, while the stomps sound very ‘Joe Meek’ when layered with kicks or snares.

Having just a dual-tom kit is clearly a bit limiting if you’re looking to emulate Ginger Baker or Keith Moon, but in all other respects this is a very versatile collection that handles anything from suitably UK-centric pop to ’60s vintage with a quite different character from the other EZX expansion packs.