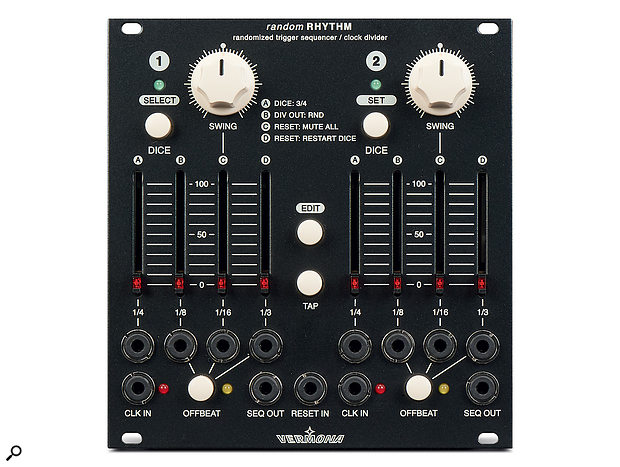 Laid out in Vermona’s usual spacious style, Random Rhythm is a dual-channel trigger sequencer optimised for hands-on, four-on-the-floor beat creation. Each channel features independent swing amounts, along with a quartet of sliders for instant, dynamic control over specific groove elements. Summed and individual trigger outputs offer a wealth of routing flexibility, plus there’s a simulated dice roll to generate a fresh batch of trigger variables whenever you fancy a change.

The two sections can sync to a common tempo or lock to separate external clocks. Many subtle rhythmic wonders are on hand if you employ the Tap Tempo button to manually synchronise one set of triggers while the other remains externally clocked. You can shift beats in and out of phase and mess with the very fabric of space-time before choosing your big moment to hold down the button (for more than a second) and magically lock the loose-flying beats to the other half.

As this is a tweaker’s module, pride of place in each section is devoted to four sliders (A-D), whose positions are tested against values generated by underlying randomness algorithms. The sliders generate triggers at 1/4, 1/8 and 1/16 intervals with the fourth delivering triplets. Move any slider to its lowest position and no triggers are generated, while at its top, all possible triggers are sent. In between these positions is where the Random Rhythm earns its name — and LED-tipped sliders provide visual feedback of trigger density. Connect a few percussion modules and in no time at all, you’ll be rustling up new patterns simply by rolling the dice and adjusting the sliders to taste.

The summed trigger output didn’t work exactly as I’d assumed but a quick flick through the manual soon set the record straight. The triggers contributed from each slider are only those that would be ‘extra’ for this slider over the lower resolutions. For example, suppose you set the 16th slider at its maximum position, you’d get perfect 16ths from the individual output. However, the Seq output would only present the beats that fall between the gaps, ie. those that would not be covered by the fourth and eighth sliders.

The individual outputs also have a secondary function. Press the ‘offbeat’ button and these outputs now work like the triggers of the Seq output. So taking our 16ths example, you’d only get the even-numbered triggers 2, 4, 6, 8 and so on — a highly useful switch, in other words.

Swing is available in positive or negative amounts: turn the knob clockwise and trigger events are delayed, anticlockwise to push them ahead of the beat. Since Random Rhythm is a dual module, much of its appeal lies in subtle interaction between the triggers of each half and it’s quite a cool (and unusual) process to shift two swing values against each other.

By default, Random Rhythm works in ‘dice mode’, meaning that each press of either Dice button generates new random values for that half. At any time you can flip into real-time mode by holding the button for more than one second (the green LED goes off). Now, random values are generated all the time, giving a constantly changing set of triggers. Another default is 4/4 pattern generation, but there’s also the option to make either half operate in waltz time.

Vermona have not included much in the way of CV inputs, but there’s a configurable Reset input that either resets the current pattern to the beginning or mutes the trigger outputs. A simple but effective trick is therefore to use a gate output of some kind to mute half of the module while the grooves produced by the other half keep running. It would have been nice had there been a way to set the level of each slider via CV, thus gaining ‘hands off’ control of pattern density. Another wish might have been for some form of accent or level control — but there at least, an external step sequencer (sync’ed to one of the individual outputs) can do the job.

The module can also be configured as a straight-up multi-lane clock divider. And since both its halves have a clock input, there’s much potential to explore driving one half from the randomly generated triggers of the other. Whatever percussion modules you give it to control, the Random Rhythm is fast, effective and intuitive. Although optimised for the roles of a typical drum machine brain, it could also earn its keep as a flexible source of instantly tweaked triggers.

Marvel's Guardians Of The Galaxy
2 weeks 3 hours ago.