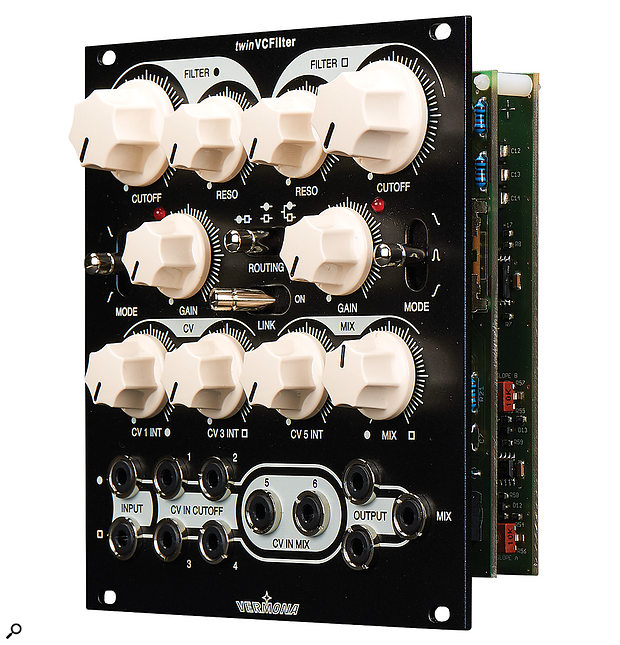 Vermona’s Eurorack stable continues to grow with the addition of the TwinVCFilter. The two filters in question are state variable 12dB designs with a noticeably different character to anything heard previously in Vermona synths. Each filter can operate in low-pass, band-pass or high-pass modes and given there is user control over the routing and balance between them, the permutations are, if not endless, certainly extensive.

Rather than numbers, filter 1 is identified by a circle, while its partner gets a square. The same graphics are used across the panel to indicate the three available audio paths: serial, dual and parallel. Beneath the routing switch is another, Link, which disables the right filter’s cutoff frequency and resonance controls. This might seem a drastic act but there are many situations when only a single set of controls for both filters is desirable, eg. when processing a stereo source in dual mode — actually the only mode in which the second input is used. In serial mode, linking the filters causes the TwinVCFilter to behave like a single instance, but with a steeper, deeper 24dB slope. Parallel mode routes input 1 to both filters. Regardless of mode, the Mix control is always on hand to govern the balance available at the Mix output.

First impressions are good and, in common with Vermona gear generally, the heady aroma of quality pervades. These are highly responsive, beautiful-sounding filters whose resonance is wet and pleasantly acidic. And, unlike some designs, the resonance is smoothly effective over its full range, with the final few degrees of knob rotation evoking a ripped-up, screaming self-oscillation. It’s a major contrast to the Moog-ish designs of the Perfourmer and Mono Lancet and to further emphasise the differences, the bottom end is hardly diminished even at high resonance.

Those earlier Vermonas were resolutely low-pass only and it’s the addition of other modes that really brings the TwinVCFilter to life. In particular, the band-pass mode at medium to high resonance is an absolute joy — brittle yet full of chirpy harmonics ripe for boosting with careful adjustments of the gain control. With both filters roped in, you can sculpt dual band-pass peaks to obtain vocal characteristics and many delicate tones.

Via the gain controls you can introduce subtle overdrive or opt for not-so-subtle; the good news is that the TwinVCFilter copes well even when the gain is pushed to its maximum. When serially routed, a fresh palette of filter responses is achieved by overdriving the first filter in varying degrees then taming it with the second. The only minor drawback there is that you can’t shut out filter 1 entirely with the gain control of filter 2. I felt it would have added to the module’s versatility if filter 2’s gain control had permitted you to fade in filter 1 from nothing, even on occasions when you’ve totally overcooked the signal.

For external control, there are six CV inputs, half of which feature attenuators. I realise Vermona could have fitted smaller knobs and thus found room to add an attenuator to each, but I personally applaud the decision to go with the familiar solid and chunky knobs with plenty of space surrounding them. Naturally you can drive each filter cutoff frequency independently, but it’s nice to see the mix available for modulation too. A medium to slow LFO gently driving this input can be marvellously subtle when you’re morphing between two different resonant filters.

Thanks to the separate outputs, you could process each filter independently — just the job for giving each a different delay or reverb. The outputs are tapped off immediately before the Mix control. Vermona have an extension module planned for later this year which will make all filter types available at once, adding a notch output and twin polarisers for good measure. The polarisers are intended for moving both filters, applying offsets, and so on.

While there is already a great selection of analogue filters for Eurorack, there’s always room for another good one — and this is very good. It can act as two separate filters, process stereo sources or produce warm and satisfying bass. Yet is equally adept at slicing through like a scalpel or, when overdriven to the extremes, it’s ugly and distorted enough to rival even such modules as the Intellijel Korgasmatron II. An excellent all-rounder.